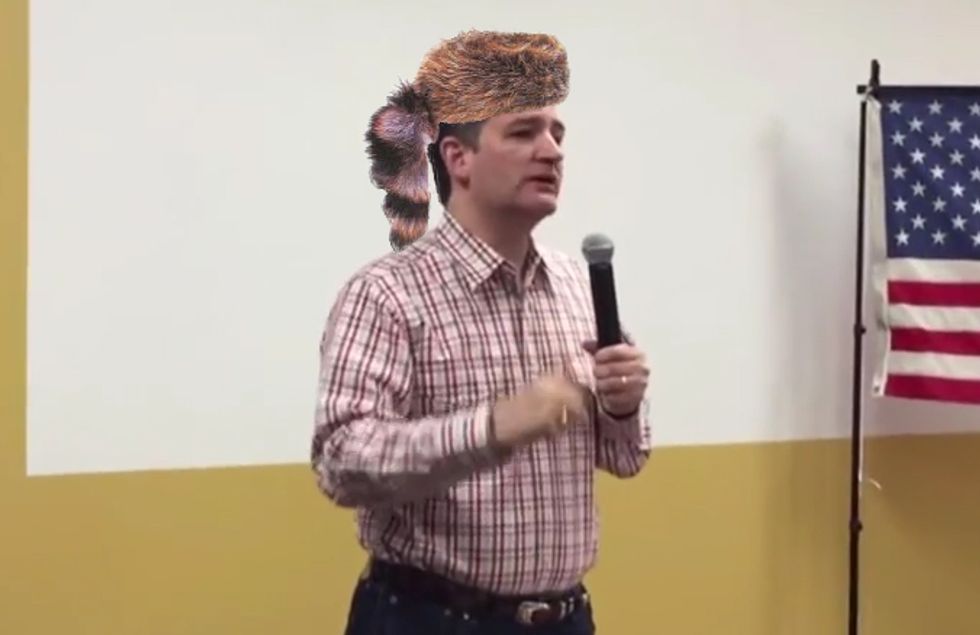 Ted Cruz had some inspiring thoughts about the long-dead Indiana law that would have allowed open discrimination against LGBT people, wishing that more Republicans would have had the guts to make a stand for it, even if it had driven Indiana's economy into the toilet. As his religious text, he provided a story from the Book of Texas, complaining that Democrats, Big Business, and The Gays had all mobbed up against the law, but that no Republicans had been willing to sacrifice themselves like the brave pro-slavery fighters at the Alamo. You have to understand: to a proud Albertan like Ted Cruz, everything reminds him of the Alamo. Or maybe the Frog Lake Massacre. Anyway, it all makes sense, at least to Ted Cruz:

Now when that fight was happening in Indiana, it was a perfect storm of Democrats and Big Business, and boy, Big Business has decided there’s money in throwing overboard religious liberty. And sadly, more than a few Republicans ran for the hills, including more than a few candidates who are running for president in 2016. Some of them chose that exact moment to go rearrange their sock drawer.

Well, by golly, instead of rearranging their socks, they should have been willing to fight to the last man against Santa Ana, or The Gays, refusing to surrender or sell pizza to gay weddings.

You know, one of my favorite former senators from Texas was Sen. Phil Graham. He tells a story about how in the 1980s -- he was a Democrat at the time, a conservative Democrat -- and he was working to round up support from other conservative Democrats for Ronald Reagan's [PBUH] tax cut. And he said other conservative Democrats were pressing back on him, and he said, "Look," and he drew the analogy, "this is a line in the sand, this is the Alamo." And he said one of those blue dog Democrats said, "But Phil, everyone who stepped across that line died." And Phil responded with a twinkle in his eye, "You’re right, they did -- and so did everyone who didn’t step across that line. And nobody remembers their names."

And there's your lesson on how President Ted Cruz might govern: pretty much like he performed when he was the Senate's first Speaker of the House, willing to shut down the government whenever he doesn't get his way, but remaining so ideologically pure that no one can ever accuse him of compromising. Until he does, and then it will be the Enemy's fault.

But darn it, Indiana Gov. Mike Pence had to go and put the state's economy above preserving people's right to discriminate against gays, so now it looks like Ted Cruz will have to find some other losing battle to fight to the bitter end. How about immigration, maybe? That way his political career can be shot to pieces by some actual Mexicans at least. Nothing makes someone a terrific president like being willing to be defeated again and again while crying "But I'm RIGHT!" Look how well that's gone for defenders of the Confederate flag.