Ted Cruz Has No Friends And Everybody Hates Him, LOL 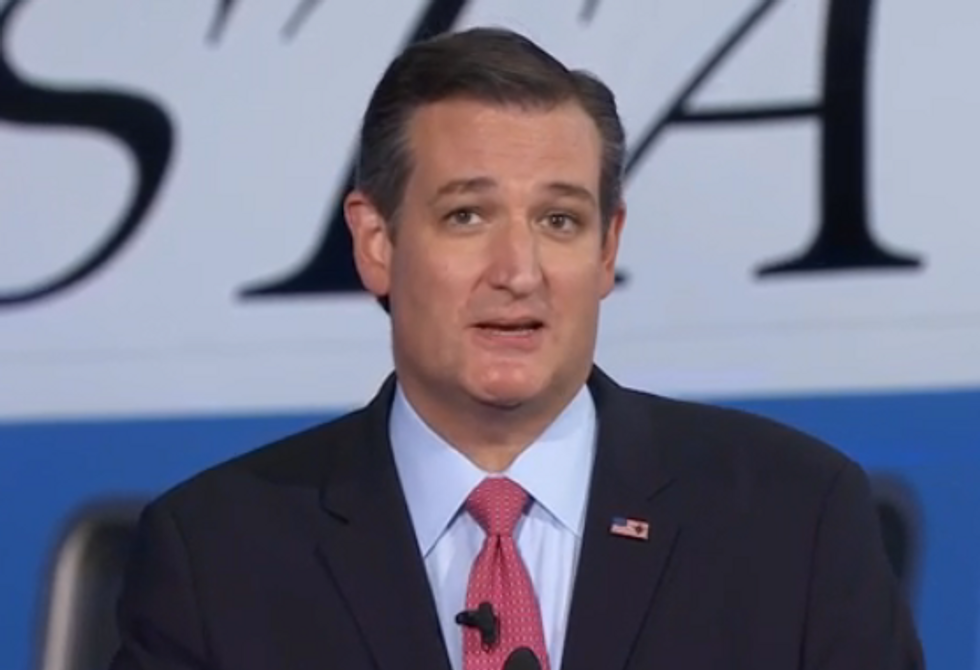 That's his "I think I just p'oopsed! myself in my pants" face

Awwww, are all the other Republicans being mean to Sen. Ted Cruz (R-Canada) again and pulling his pigtails and telling him he cannot eat his PB&J at their table in the cafeteria, because what a loser, YOU SUCK, TED? Why yes, indeed, they are doing that. Again:

Ted Cruz can’t even get a protest vote in the Senate anymore.

You may recall the last time Cruz tried to hijack the Senate to push his presidential campaign platform of Vote Cruz To Make His Dry-Drunk Daddy The Lord God Our King Of The Supreme Court. Cruz was all butthurt in July because Majority Leader Mitch McConnell was not trying hard enough to defund Planned Parenthood or even issuing idle threats to shut down the government, what a RINO. McConnell, like his run-out-of-town-on-a-rail pal Speaker John Boehner, is aware that his Democratic colleagues will never allow Congress to enact such a bill, and even if the entire Blue Team called in dead on the day of the vote, President Obama would veto the blazing spitballs out of that sucker, SO THERE IS NO FRIGGIN' POINT. (Also, side note, as you know, a huge majority of Americans really do want their taxpayer buckeroos to keep going to Planned Parenthood, please and thank you.)

More importantly, McConnell vaguely recalls how the 2013 government shutdown was bad news for Republicans, and he's trying to not let that happen again, because BAD NEWS FOR REPUBLICANS, DUH. Plus, like Boehner, he is kinda sick of being bossed around by these uber-conservative newbies who do not understand how Being A Grown-Up Congressperson is supposed to work. (Hahaha, maybe you Republican Party jerkholes shouldn't have sucked on all those teabags, back when you thought those screeching extremists might help institute a permanent Republican majority!)

In July, when Cruz did not get his way, he had hisself a right hissy fit and called McConnell a stupid dumb-dumb liar, and then Cruz's Republican colleagues -- from his own Republican Party -- spent their weekend calling Cruz a stupid dumb-dumb dick stump and saying shade-throwing words like, "We must ensure that the pernicious trend of turning the Senate floor into a forum for advancing personal ambitions, for promoting political campaigns, or for enhancing fundraising activities comes to a stop." And boy, that was a Sunday funday for everyone who was not Ted Cruz!

That, however, was not enough for Cruz, so he's still at it. As the self-appointed Patron Saint of Pro-Lifery -- who thinks even the pope is a fake pro-lifer because he doesn't believe in killing people -- does not care that defunding Planned Parenthood is actually UNPOSSIBLE, because of how Democrats will never allow that to happen. And also, it's a stupid dumb-dumb idea since the American people do not want that to happen. So Cruz is like, "Eff all y'all," and he's STILL trying to lead the congressional nihilists in a doomed defunding campaign. But his Senate colleagues hate Cruz maybe even more than they hate Planned Parenthood, and they have had it up to HERE with his fist-shaking and foot-stomping and pants-pooping:

Republicans have grown tired of Cruz pushing proposals that he knows McConnell and other Republicans will never back, like defunding Planned Parenthood in a spending bill, then criticizing McConnell for not taking up the plan even as he uses the fight to bolster his presidential campaign as Washington's consummate outsider.

Cruz's internal criticism of his leadership is what animates his presidential campaign, but his colleagues appear to be no longer listening. Cruz was allowed only to speak for an hour on Monday night under Senate rules, and no one was itching to grant him an exception.

It really made Cruz's feelings extra butt-sore when his supposed partisan allies were like, "Shut up, Ted Cruz." So he whined, for a whole hour, on the Senate floor Monday night, about how Washington DC sucks and everyone is mean to him, and boo-hoo, daddy, kiss it and make it better, please. And yet, that failed to change anyone's minds, because Cruz's own party thinks he is a punk-ass snot-sucker, and they would rather #StandWithPP than give him a happy in his Pull-ups. Which is why they yelled at him and called him names and made fun of him and then tried to get on with doing their job of actual governing of U.S. America, almost as if that's exactly what they had been elected to do.