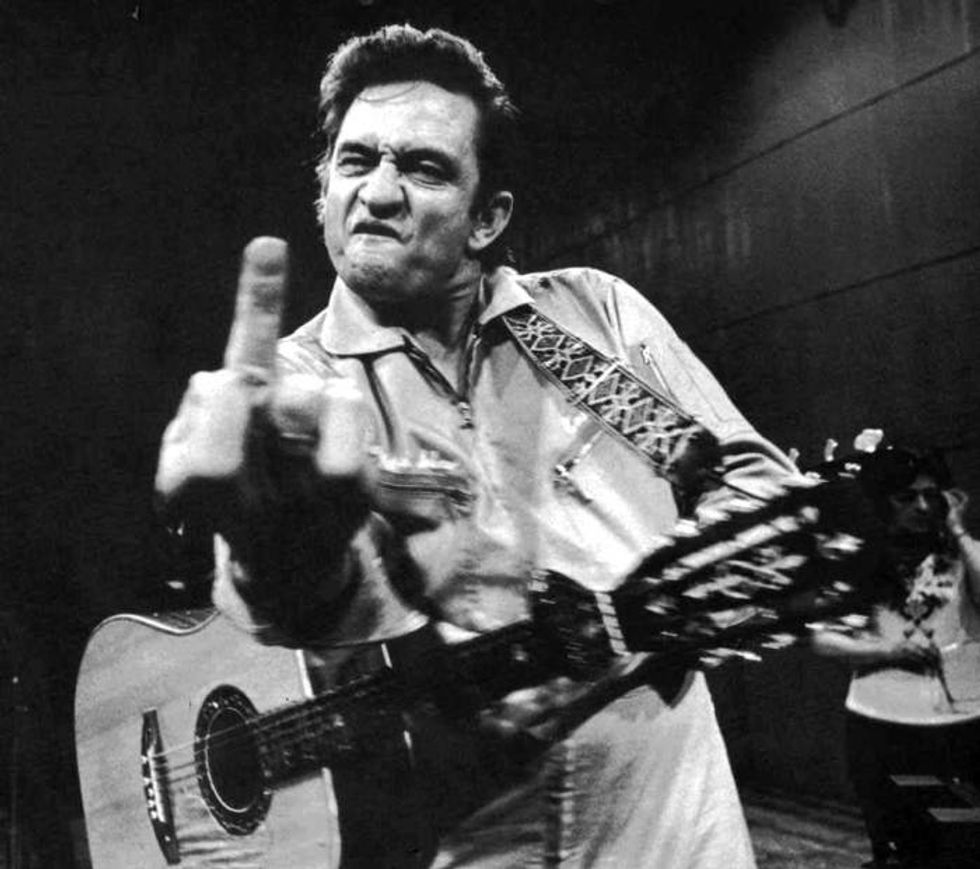 Now this is some carefully targeted pandering! In an interview with CBS This Morning, Ted Cruz explained that the terrorist attacks of September 11, 2001, completely changed his taste in music, apparently because classic rock failed to meet his anger needs:

Music is interesting. I grew up listening to classic rock. And I'll tell you sort of an odd story: My music tastes changed on 9/11. I actually intellectually find this very curious, but on 9/11, I didn't like how rock music responded. And country music -- collectively -- the way they responded, it resonated with me. And I have to say just at a gut level, I had an emotional reaction that says, 'These are my people. And ever since 2001, I listen to country music. But I'm an odd country music fan because I didn't listen to it prior to 2001.

Cruz didn't specify exactly what he found lacking in rock's reaction to 9/11, but probably it had something to do with that pussy Neil Young:

Or maybe it was that wimp Bruce Springsteen, not being vengeancey enough and instead whining about a "sky of longing and emptiness" instead of telling bin Laden and all his camel jockeys that it was time for a good carpet bombing:

Then again, we can see why Cruz might not like Springsteen so much, seeing as how The Boss is a painful reminder that he wasn't Born in the U.S.A.

From our pathetic commie pacifist perspective, the musical response to 9/11 that sticks with us the most has to be Laurie Anderson's. She went ahead with concerts in New York on September 19 and 20; her dedication is probably exactly the wrong message that Ted Cruz would take away from 9/11, which is reason enough to love Laurie all over again:

We want to dedicate our music tonight to the great opportunity that we all have to begin to truly understand the events of the past few days, and to act upon them with courage and with compassion, as we make our plans to live in a completely new world.

(Sorry about the sudden cutoff -- that's the only version we found on the YouTubes.) Here's a reprint of a 2001 review of the concert that you might enjoy much more than thinking about Ted Cruz. Her liner notes (scroll down to "Some Thoughts on the Live in New York Recording") are worth a read, too.

From a purely personal musical perspective, Yr Dok Zoom associates 9/11 with the September 12 concert that They Might Be Giants had scheduled in Boise, which had to be cancelled because of the shutdown of air travel. They finally made it a year or so later, and introduced "New York City" with a reminder of why they had missed the concert the first time. It's entirely too boppy a song to listen to in tears, but as the senator says, that's the funny thing about music, isn't it?

Still, Mr. Cruz's perspective on music is OK, too: If it doesn't stir Patriotic blood lust, what good is it? We wonder if he'd have ever hung out with country music fans in college?