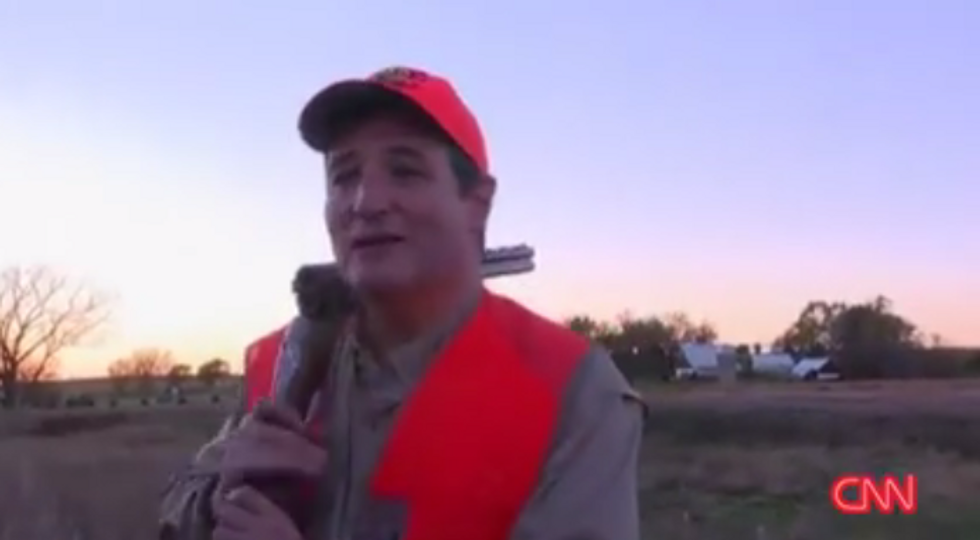 Maybe the Second Amendment is just about hunting after all

Ted Cruz, America's greatest defender of True Patriots who know Big Government is not the boss of them, at least when it comes to the homosexbian stuff, has found the one battle against tyranny that makes his bacon-wrapped freedom pole go limp:

Republican presidential candidate Ted Cruz on Monday called for armed protesters who occupied a federal building in Oregon to "stand down peaceably."

[contextly_sidebar id="vxmwBznzWqfLZzYudba0W6bLSoAxjXdg"]Funny, because last we'd heard from Ted Cruz, his favorite constitutional amendment was the one about using force and violence, so long as it's for freedom reasons. Heck, you'd expect some well-armed militia bros -- like the hillbilly cow-humpers occupying the critical military target of a middle-of-bumfuck-nowhere U.S. Fish and Wildlife Service office -- would be the precise application of the Second Amendment Cruz pretends to appreciate. But while these brave freedom fighters know it's unconstitutional to throw criminals in prison if they are white and wear cowboy hats, Cruz has wimped out like some kind of Obama administration peacenik and decided the right to bear arms against the government ought to be exercised without any violence, please:

"We're hopeful that that situation can be resolved peacefully and without any violence," [White House Press Secretary Josh] Earnest said during his daily press briefing.

Good god, Cruz sounds just like one of them! What, is he auditioning for a gig in Obama's inevitable power-grabbed third term?

As for Cruz's fellow Republican presidential candidates, for whom MORE GUNS is the answer to pretty much everything, we've heard a whole lot of nothing from their usually wide open face holes. You'd almost think they were feeling a little timid about supporting whackadoodle armed insurrectionists for some reason! Asked whether he supports these brave patriots, Sen. Marco Rubio tried to see all the sides of the issue so he didn't have to give a real answer, once against demonstrating his bold and innovative Leadership For A New Century That Started 16 Years Ago:

Rubio said during an interview with KBUR that he agrees "that there is too much federal control over land especially out in the western part of the United States."

Great answer, Marco Rubio! Sure, these gun-toting law-breaking dickbags should refrain from doing what they're doing, but on the other hand, they do make a solid point about how the government has too much control over our lives, when you can't even set federal land on fire to cover up some other crimes you've committed without being convicted of crime-doing and ordered to prison.

Sure is tricky, figuring out how to support freedom without looking like you're supporting lawlessness. If only these gun-toting heroes-slash-villains were simply refusing to issue marriage licenses to buttsexers, well, it would be a whole lot easier for these conservative heroes to know who the bad guys are.