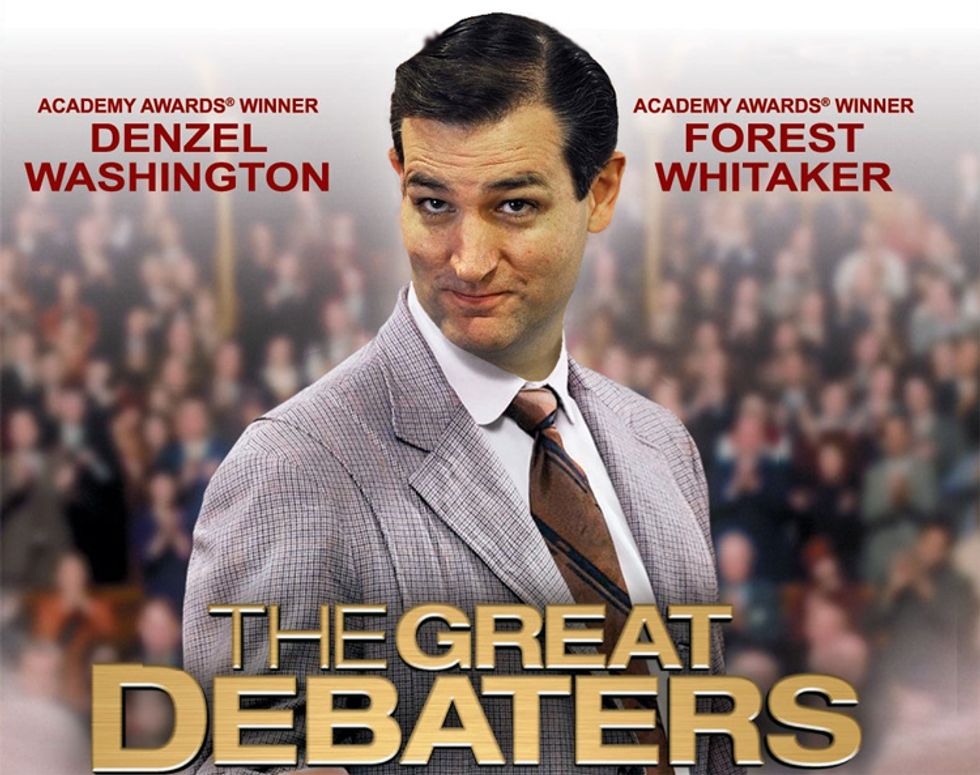 Ted Cruz has apparently had enough of all the Hitler rhetoric over the Iran nukes deal, and is now suggesting that Barack Obama, Hillary Clinton, and John Kerry want to have a hot swinger foursome with Iran and maybe even a big ol' sex-pile with other Enemies Of America.

In a Wednesday radio interview with bile-fueled hatebot Dana Loesch, Cruz whined that it's high time for Obama to meet him for a one-on-one debate about the merits of the deal -- because of course presidents have debates with freshman senators all the time -- and "if he can’t be pulled off the golf course then he can send as a proxy Secretary Kerry.” Edgy! How did he forget to throw in a teleprompter joke while he was at it?

See, the biggest problem with the "Obama-Clinton-Kerry" foreign policy (yes, Cruz thinks he's running against all three of them) is that Obama simply refuses to debate Ted Cruz, because he is a big old chicken and won't talk about the "substance" of the Iran deal instead of the "smoke and mirrors that is endangering the national security of our country with this catastrophic deal." Needless to say, Cruz didn't specify what substantial issues he objects to in the deal, except that it is very, very bad, and also is bad for our allies, who are Israel. (He didn't mention our other allies, Britain, France, Germany, and the EU as a group, who also signed on to the deal, because they aren't Israel -- don't you know anything about geopolitics?)

Worst of all, said Cruz, the Obama-Clinton-Kerry foreign policy sides with our enemies instead of our friends, because we've abandoned Israel by not sending any cabinet members to Benjamin Netanyahu's State of the Union address to Congress, and also by not arming the Kurds against ISIS (except for how we are, but not enough).

But even worser worst of all, Obama, Clinton, and Kerry insist on trying to “snuggle up to radical Islamic regimes who hate America,” after which they play strip poker and really dirty sessions of Truth or Dare, which is how John Kerry ended up falling off his bike in the Alps. True story. In every possible instance, said Cruz, "this administration undermines allies of America and supports regimes that have deep ties to radical Islamic terrorists." Why? Because the president is a sex pervert in bunny slippers, obviously.

Cruz also pined for the good old days when America was comfortably in bed with Hosni Mubarak, who may have been a dictator but at least gave us a nice foot rub between his periodic brutal crackdowns on dissent.