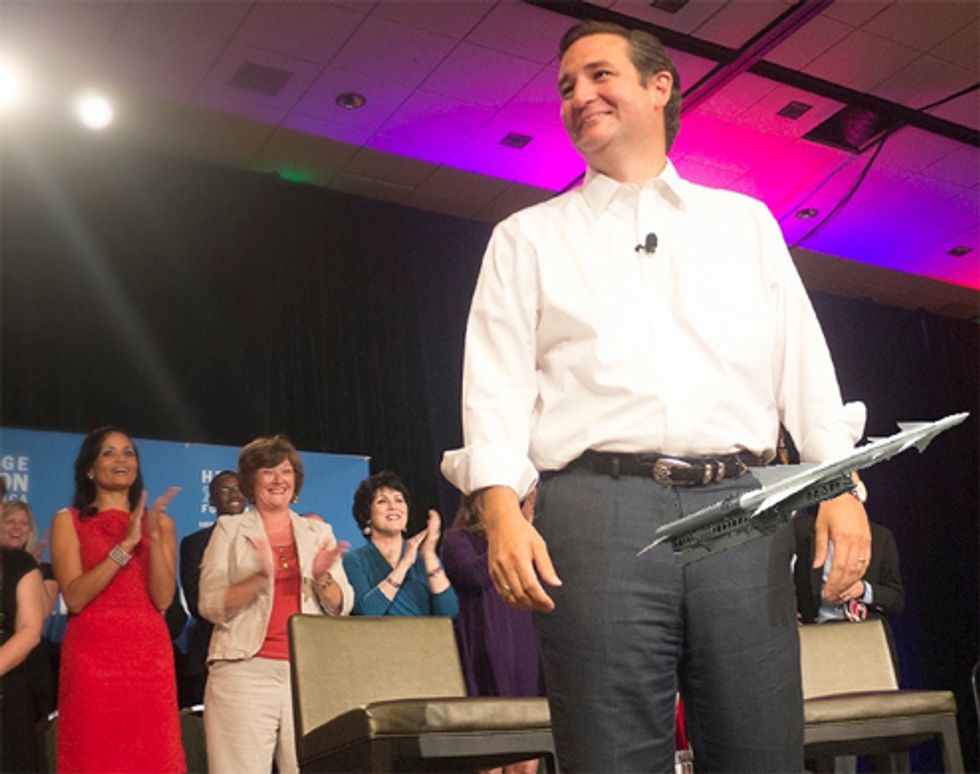 Just in case you were worried that we hadn't heard enough stupid ideas from the Git Tuff On Roosha wing of the GOP, Ted Cruzweighed in Monday with his own suggestions for what could be done about Russia's invasion of Crimea: Instead of just imposing wimpy mom-jean sanctions on Russia, how about going full Cold War and moving some antiballistic missiles into Eastern Europe, so Putin knows we Mean Business?

“Beyond sanctions and aid to Ukraine, the most important thing we could be doing right now, with respect to Russia, is installing anti-ballistic missiles in Eastern Europe,” Cruz said in an interview.

“Appeasement has not worked,” he added. “After more than five years of being unwilling to stand up to Putin and Russian aggression, it is time for the United States to honor our commitments to our friends.”

Yeah, damn straight -- just like how George Bush got Putin to pull out of those Georgian territories in 2008. Nothing says "get out of Crimea" like a bunch of antiballistic missiles in Poland, which would clearly tell Putin that we will not tolerate a nuclear attack.

You may well be wondering when Ted Cruz became such a military expert. Possibly it was last September, when he learned that you need to be firm with tyrants, which is why he opposed attacking Syria because it was far more important to focus on Benghazi, and on shutting down our own government. And look at the manly example that undoubtedly showed Russia real good: when faced with a crisis, we can collapse our own government without any help from dirty foreigners.

But in this particular case, Cruz is calling for a return to the successful missile defense strategy of George W. Bush, which was to deploy billions of dollars worth of worthless anti-missile missiles that still haven't worked in tests, so that Russia will know we're not to be trifled with. It was a great idea before Barack Obama cancelled the deployment in 2009, and it was a great idea when Dick Cheney suggested it last week. Cheney had a whole lot of useful ideas to Git Tuff with Putin:

“My answer is reinstate the ballistic missile defense program,” Cheney said. “Conduct joint military exercises with our NATO friends close to the Russian border. Offer up equipment and training to the Ukrainian military.”

Because god knows if there's anyone who knows how unacceptable it is for a superpower to just cold invade another country for the sake of vaguely defined "national interests," it's Dick Cheney. And now he's got Ted Cruz pushing the same ideas, so that should be all the proof anyone needs of how smart they are.

Follow Doktor Zoom on Twitter. He can hardly wait for the next great retro Cold War fad -- maybe a big budget remake of The Day After, where we win.