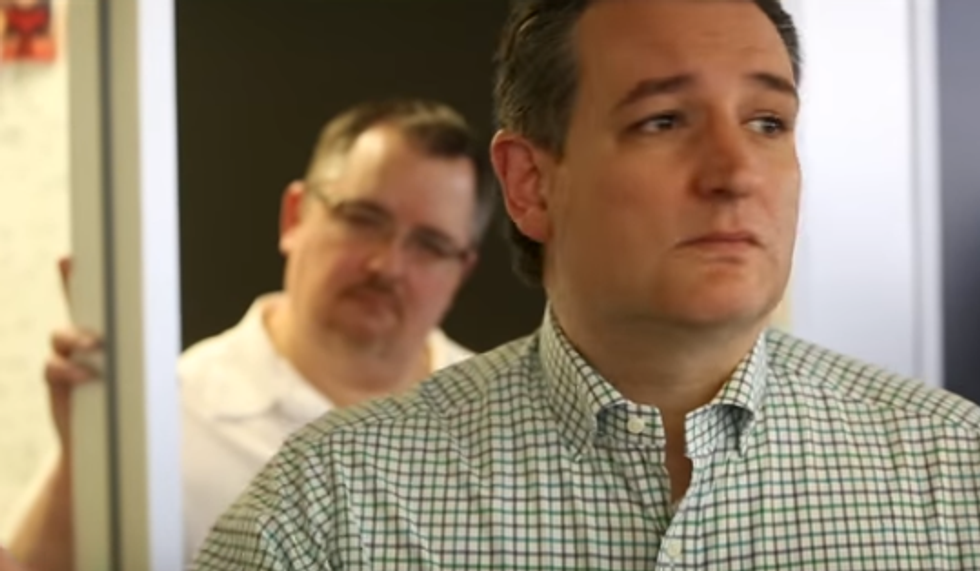 Do you want to watch an interminable bye-bye video from Ted Cruz about how his campaign was just the most honorable thing ever, which features white wingnuts crying salty jizz tears at each other about how it's so sad Ted Cruz didn't get elected as our new Jesus? No, you would not be into watching that? We hear you saying you want Wonkette to watch that video for you and find the funny parts, and post pictures of them, so we can all punch Ted Cruz in his dumb face for no reason on this lovely Tuesday morning, is that accurate?

As always, we are at your motherfuckin' service!

So here is Ted Cruz mimicking human emotion, as he Monday morning quarterbacks how awesome his losing campaign was. It's almost like there are tears in his eyes or something, but that might just be liquid poutine bits or eye boogers. The guy behind Ted is somebody else, we dunno. He narrates the video, and says they have No Regrets about what fucking losers they are.

Blah blah blah, more video footage of frumpy white people being sad, OH LOOK, IT IS CARLY FIORINA! She is showing off her "silly" side in this picture, we think. Man, what a historic nine days that was, when she was Ted's running mate. America, this could have been your new Joe Biden:

Here, we see footage of one of the Cruz daughters using her Obamaphone to listen to the newest Taylor Swift record, 1989. We were shocked because that is SECULAR MUSIC!!!111!!!, but we very much encourage little Cruz-ette to keep listening to Taylor Swift The Feminist, and not listen to her gross parents' advice on any of the important issues in life.

[wonkbar]<a href="http://wonkette.com/600658/we-are-starting-to-for-real-worry-about-ted-cruzs-wifes-well-being"></a>[/wonkbar]In this picture, we see Ted Cruz mimicking human affection toward his wife, by strangling her or something. Heidi's smile is so very genuine, yes indeedy you bet. Inside Ted's mind, he is thinking about how he is still mad at Heidi for returning 100 of his cans of soup when they got back from their honeymoon.

Fuck. You are probably punching his face on your 'puter screen right now, aren't you?

[wonkbar]<a href="http://wonkette.com/601337/donald-trump-ted-cruzs-dry-drunk-dad-murdered-jfk-but-maybe"></a>[/wonkbar]Here, to distract you from Ted's bad face, look at Ted's dry-drunk dad Rafael, exchanging 25 ways to drive your man wild in bed with that fucking Duck Dynasty guy. JUST KIDDIN'. They were probably talking about what's the best way to kill JFK.

And finally, we have saved the worst for last. It is the very last frame of the video, where Cruz foreshadows and insinuates and squicks all of humanity out by implying he's going to run for president again some day:

NO, TED, NO, GO THE FUCK BACK TO CANADA WHERE YOU GOT BORNED, AMERICA HATES YOU.

Meh, Canada doesn't want him either. Nobody does.