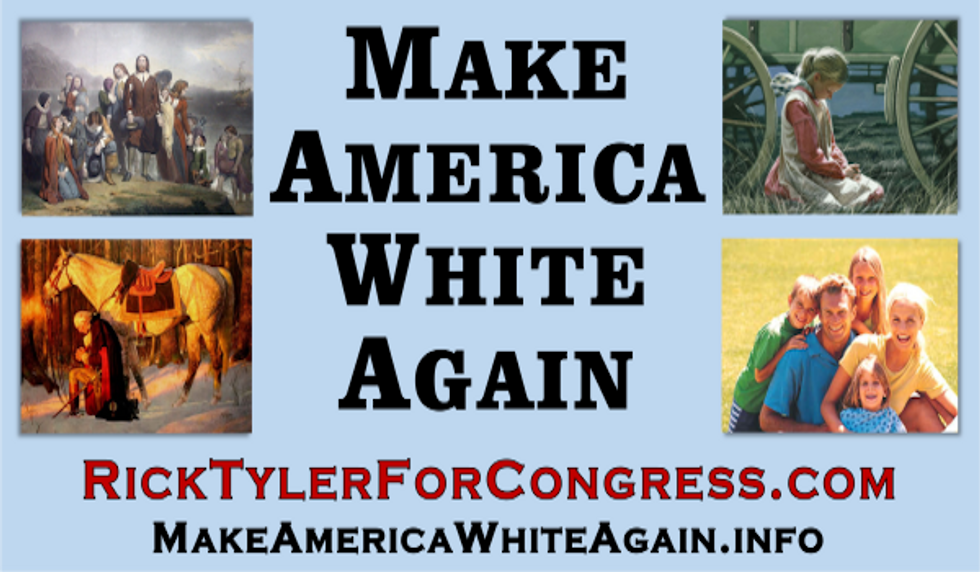 Tyler, who is running as an independent candidate, put these billboards up around Polk County, TN (the "Make America White Again" one was removed by the billboard owner's wife), where they did not actually go over very well with much of anyone, besides Rick Tyler, who is a weird and sad man. He believes people love them and agree with him.

He explained to WCRB in Tennessee that he has "no hate in his heart" for people of color -- which means, of course, that he is not a racist. He just wants to go back to living in that "1960s, Ozzie and Harriet, Leave it to Beaver time when there were no break-ins; no violent crime; no mass immigration." See? Not racist.

Of course, he doesn't mention shows like "Mr. Ed," about the Horsie Justice Warrior who wanted to be treated like a human and whatnot. And not "The Many Loves of Dobie Gillis" either, because that Maynard G. Krebs was one bad apple. Beatniks? No thank you! See, I had Nick At Nite too, Rick Tyler! Although if I were going to live in a fictional universe from an old timey TV show, I would go live in "Welcome Back Kotter" so that all the Sweathogs could be my boyfriends. OH! Or "Rhoda," because I like scarves. Not "That Girl" though. Because even though I love Marlo Thomas, I am aware that we kind of look alike, and we'd probably get our kites mixed up constantly.

But I digress! Here is a video of Rick Tyler talking about his dumb billboard, how mad he is that black and brown people exist and live in this country, and also about how he thinks television sitcoms are real.

Mr. Tyler is very sure, he explains, that all the problems we have with crime and terrorism now would go away forever if somehow we could get rid of all the black and brown people that are living here. He does not, however, explain how he plans to go about this, or into any detail on what his "final solution" would be. He just wants to go and live in a 1950s sitcom, where there are no people of color and he gets to have an identical cousin and leave his door unlocked at night.

Now, you might be curious about what the WWFFD stands for on his hat! So I looked it up for you! It stands for "What Would The Founding Fathers Do?" -- by which we can only assume he means "wear powdered wigs and own black people as slaves."

According to his website, Tyler has some ideas for more charming billboards he'd like to put up:

Anyone else get the feeling that Rick Snyder has gotten dumped for a black guy a couple times?

Of course, it would be easy to be abjectly horrified by Rick Tyler's mere existence. And I am! But I think we ought to look on the bright side here. There is literally no way this loser's sad dream is ever going to come true. Like, he's gotta spend the whole rest of his life being miserable and sad and disappointed that he can't live in some white supremacist utopia. And that is kind of delightful. Like, I genuinely hope he is unhappy.

I realize Mr. Tyler has thought long and hard about what television universe he would most like to live in, but I think it would probably behoove him to take a trip to "Fantasy Island," so that Mr. Roarke can take his dream, turn it into a twisted nightmare, and then teach him a good lesson or two.