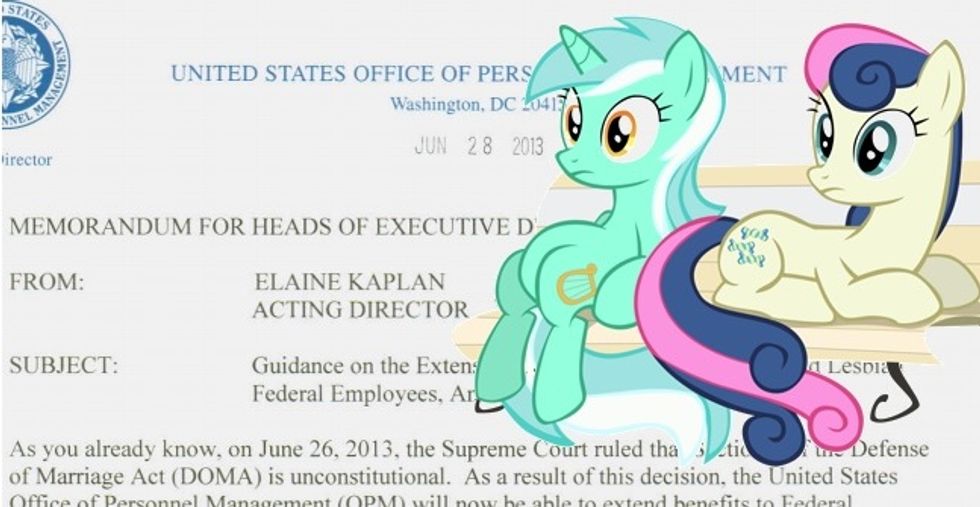 Congratulations,Collegedale, Tennessee! As of right now, you are the first city in Tennessee to offer equal benefits to same-sex spouses of government employees! The municipal policy looks like a pretty clever poke in the eye to Tennessee's stupid 2006 constitutional amendment banning gay marriage, and so welcome to the first half of the second decade of the 21st century, residents of Collegedale, even if your town's name sounds like it was made up for a situation comedy. Can Riverdale and Townsville be far behind?

City attorney Sam Elliott -- we guess if he's an attorney, that means he et the bar -- noted that the policy "does not define marriage" and that it was crafted to account for existing Tennessee law, adding that the Tennessee Court of Appeals has recognized that "family" can be a

“flexible term that is broad enough to include a collective body of persons who form one household and who have reciprocal, natural, or moral obligations to support and care for one another.”

Which sounds to us like it might be creeping sharia, or maybe Unitarianism, but works out pretty well for actual human beings like Collegedale police detective Kat Cooper, who testified that her wife had been denied insurance benefits, following their marriage in Maryland earlier this year:

“It should be of no importance to my employer if my lifelong commitment is made to a man or a woman — both are equal,” Cooper said. “Small ripples can precipitate huge waves. In this case, a great opportunity lies in your hands.”

It's probably only a matter of time until some genius sues because they think they're being harmed by their Taxpayer Dollars going to support health insurance for complete strangers they consider sinful, but for now at least, the old cliché rings true: As goes the United States Office of Personnel Management, so goes Collegedale.