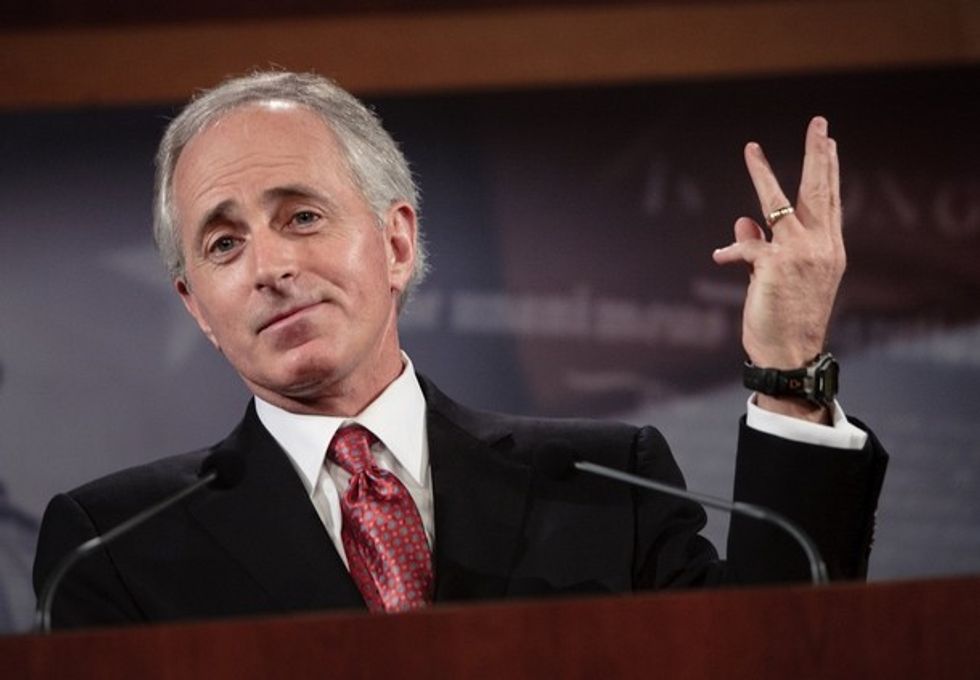 There are a lot of rich white men who are representing you in our nation's most deliberative body, and sometimes they set themselves apart by being INSANELY CRAZY. But sometimes they are just run-of-the-mill crazy, in which case it is hard to tell them apart. This is why you don't yet know very much about Republican Senator Bob Corker probably -- it is because so far he has been able to blend in, chameleonlike, with all of these other moderately crazy rich white male Republican Senators and stay just below the radar. JUST CRAZY ENOUGH to be a Republican; NOT CRAZY ENOUGH to be a particularly noteworthy Republican. But today may be the day that the tide turns for Bob Corker, because it is the day that we learned of his brilliant suggestion vis a vis the debt ceiling and impoverishing our future seniors:

What is this brilliant suggestion? Well, see, he explained it on Fox News Sunday, and basically, what Republicans should do is vote to increase taxes on the top 2%, then that will give them leverage to hold the debt ceiling hostage so they can REALLY give the shaft to seniors and Poors:

CORKER: The Republicans know they have the debt ceiling, that is coming up around the corner, and, the leverage is going to shift, as soon as we get beyond this issue. The leverage is going to shift, to our side where hopefully we’ll do the same thing we did last time and that is if the president wants to raise the debt limit by $2 trillion we get $2 trillion in spending reduction and, hopefully, this time, it is mostly oriented towards entitlement and with no process. [...]

[Obama] has the upper hand on taxes and you have to pass something to keep it from happening. We only have one body. If we were to pass, for instance, raising the top 2 rates, and that’s it, all of a sudden we do have the leverage of the debt ceiling and we haven’t given that up so the only way the debt ceiling.

If this doesn't sound EXTRA crazy it is because he has wrapped it in the language of Boring, using words like Percent and Rates and Leverage and stuff. SNOOZEVILLE! But let us translate it for you, and then you will come to appreciate the dangerousness of this statement, and also, the fact that it doesn't even make mathematical sense. ALL OF THEM KATIE.

See, the debt ceiling represents money that HAS ALREADY BEEN SPENT. It is not NEW MONEY that we are thinking about maybe spending if we can afford it; it is money that WE SPENT. So since we already SPENT THIS MONEY we have to PAY for it, which you'd think the party of personal responsibility would be very enthusiastic about.

But they are not enthusiastic about it, they want to NOT pay for it so they can have an excuse to privatize Medicare. What does paying our bills have to do with privatizing Medicare, particularly during an ongoing period of high underemployment and unprecedented income inequality? Oh, nothing. Nothing at all, but that doesn't mean that Republicans might not do it because they DID do it, in 2011, when Republican disinterest in paying our bills almost led to a credit default and ultimately cost taxpayers $18.9 billion over 10 years, due to elevated interest rates between January and August 2011 as well as a drop in our credit rating for the first time EVER.

No but let's totally do that again so that our future seniors will have to work till they are possibly dead anyway, this will make up the extra billions of dollars that it will cost us when we risk our credit rating again. And then we can REALLY stick it to seniors and (future) Poors.