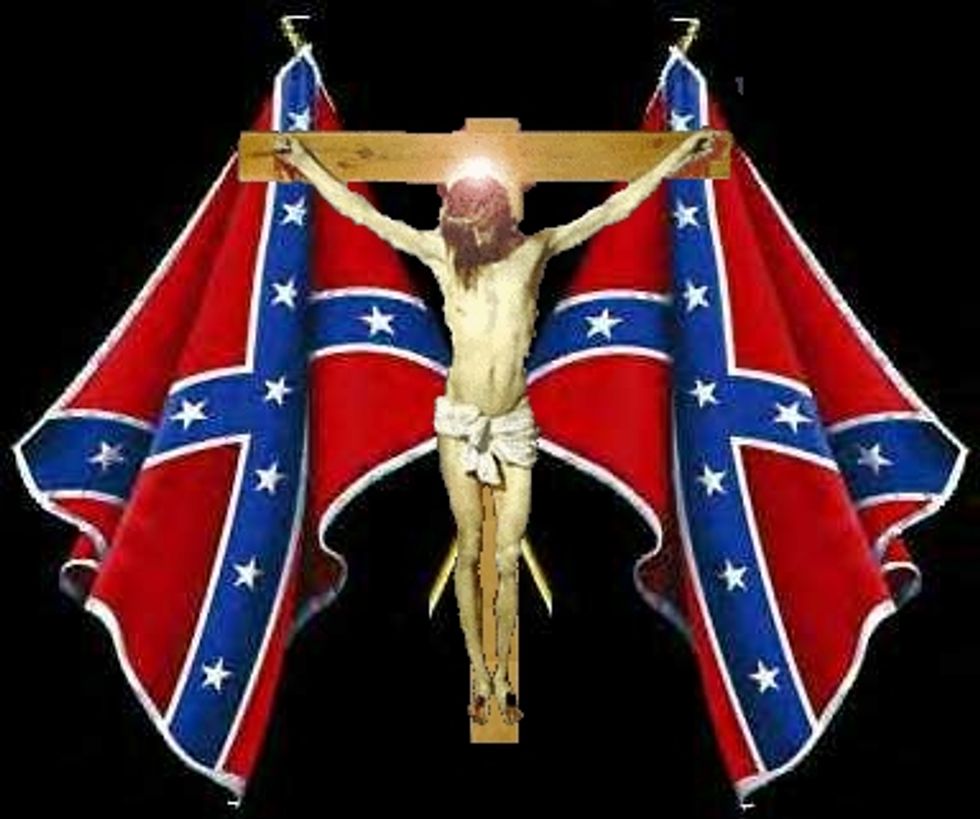 Tennessee State Senator and inaugural nominee for Wonkette's coveted Legislative Shitmuffin of the Year Award Stacey Campfield must have been worried that we'd forgotten all about him, so he's introduced legislation that protects the sacred right of teachers and students to say "Merry Christmas" in public schools.

“This stops all these silly lawsuits that say you can’t say ‘merry Christmas’ or ‘happy Hanukkah’ or have a Christmas tree,” said Campfield, R-Knoxville, who has pre-filed SB1425 for consideration by the General Assembly in 2014.

Campfield was unable to actually identify a single case of a lawsuit being filed over what the bill calls "traditional greetings" during "winter celebrations," but says that he knows people who are "afraid of lawsuits,' possibly because they, like Campfield, are idiots who have convinced themselves that Christians in Tennessee are a persecuted minority.

Campfield explained that his "Merry Christmas bill" is necessary because "The ACLU is always freaking out about that stuff."

The executive director of the Tennessee ACLU, Hedy Weinberg, said that Campfield's concerns were greatly exaggerated and that she knew of no cases involving Tennessee schools' holiday celebrations, or even any cases of "blatant religious proselytizing" that had prompted a lawsuit.

“Sen. Campfield is envisioning a problem that does not exist,” she said. “As Gov. [Bill] Haslam has said, legislators should not be filing legislation just to be wasting paper, and this seems to be one of the things that would be in that category.”

Wonkette congratulates Ms. Weinberg for her restraint in not also describing Campfield as a paranoid wanker. Also, "Haslam" sounds mighty similar to "Islam" -- has Campfield investigated this guy?

The Tennessee ACLU sent a letter to school administrators last fall explaining that holiday celebrations "that focus on religious symbols" could be problematic, but there has never been a prohibition on saying "Merry Christmas." An information sheet (PDF link) from the national ACLU explains that the 1984 Lynch v Donnelly decision governs holiday displays in schools:

Under this ruling, a Christmas tree would be appropriate while a cross or a nativity scene would not. Crosses and nativity scenes are purely religious symbols that have not gained secular status in our society and therefore may not be displayed in public schools.

So, no, nobody's coming to arrest the Christmas tree, either, although Campfield's bill is modeled on a similarly unnecessary law signed into law in Texas by Gov. Rick Perry in June. That law was sponsored by a state legislator who was upset when his son's school called its dead Douglas fir a "holiday tree," although there again, the fear of a lawsuit was entirely imaginary.

It's really pretty simple: "Merry Christmas" is nice, and legal for a public school. "Happy Holidays" recognizes that there are other winter holidays, especially that weird Jewish dreidel candle thing. "Merry Christmas, and remember that Jesus died on the cross in horrible agony with a bleeding knife through his head for unworthy sinners LIKE YOU" is a teensy bit over the line.

Also, we have a sneaking feeling that Stacey Campfield is going to be getting a Legislative Shitmuffin Of The Year award in his stocking.