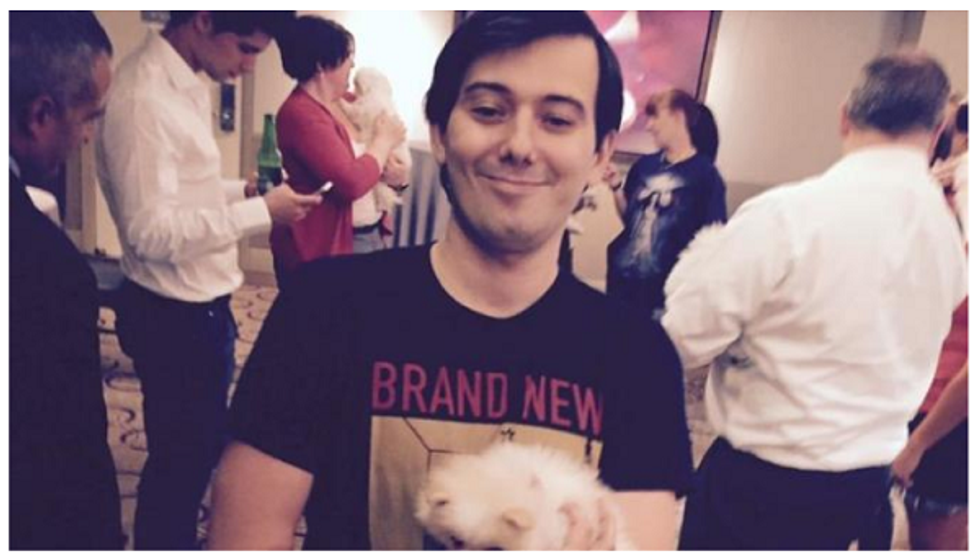 This week the internet has been doing a mighty good Two Minutes Hate against asshole pharmaceutical CEO Martin Shkreli, and for good reason, since his company, Turing Pharmaceuticals, decided to buy the rights to a life-saving drug, Daraprim, and immediately raise the price FIVE THOUSAND PERCENT, rendering it unattainable for many of the people who desperately need it. Rude, right? Heartless? Yup. Greedy fucking asshole who cares more about his profits than whether or not people die? Hey now, let's not be too harsh!

And hey, internet, Shkreli has HEARD YOU. He understands how you are very stupid, and couldn't possibly comprehend the details of his very complicated job, or why it's totally normal to suddenly raise the price of a life-saving drug FIVE THOUSAND PERCENT. And maybe he senses that his dick move has greatly reduced his chances of ever getting his dick wet in a human person again (BY FIVE THOUSAND PERCENT), so fine, fuck you, he'll drop the price of the drug:

Martin Shkreli did not say what the new price would be, but expected a determination to be made over the next few weeks.

He told NBC News that the decision to lower the price was a reaction to outrage over the increase in the price of the drug from $13.50 to $750 per pill.

"Yes it is absolutely a reaction — there were mistakes made with respect to helping people understand why we took this action, I think that it makes sense to lower the price in response to the anger that was felt by people," Shkreli, 32, said.

Take that, you bleeding hearts. Sorry you just have too much compassion for people suffering from toxoplasmosis, a rare disease which can be deadly for people with weakened immune systems from AIDS, cancer and the like. He doesn't know how much he's going to drop the price, of course -- his "determination" will probably take into account whether he can truly afford to skip a day in the helicopter here and there, or possibly go for the $2,000 bottle of wine instead of the $9,000 bottle every so often.

What's even more entertaining, though, is how Shkreli is not only smarter than all you lay idiots out there, but also smarter than medical associations that serve the very people Daraprim is intended to help:

The Infectious Diseases Society of America and the HIV Medicine Association objected to the price increase, saying "this cost is unjustifiable for the medically vulnerable patient population in need of this medication."

PFFFFFFFFT, know what's REALLY vulnerable? Martin Shkreli's ability to trick ladies into sexing him by showing them all the sexy boat rides and Eminem lyrics on his Twitter account, which is now, shockingly, open only to approved followers, and closed off to THE PLAYA HATAS.

Anyway, he will let everybody know when he knocks a solid dollar or two off the drug price, and everybody will admire him, for being so badass, so generous, and so fucking sexy that WE CAN'T EVEN.

Also, he is a crazy person, and we are a-skeered.