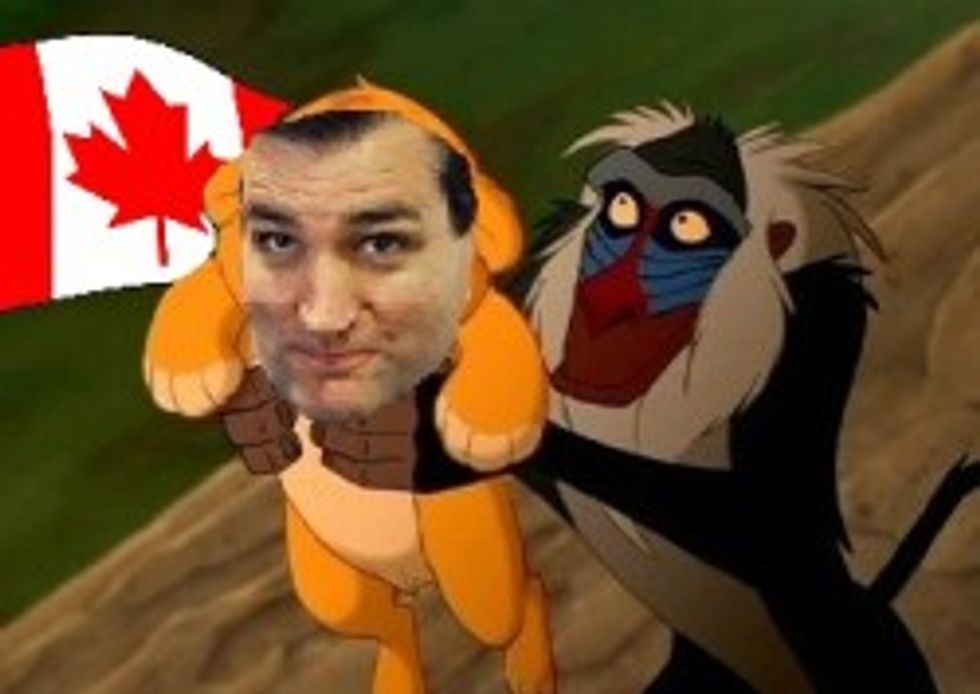 Eight minutes can be a really long time. It’s about the amount of time it takes light from the sun to travel to the earth. Or in more earthly terms, it’s twice as long asGary’s never-gonna-happen fantasy about Piper Perabo. But if you are an addled, half-brained drooling Tea-jadist, then it is just the right amount of time to give a standing ovation to Texi-Canadian ass-monkey Ted Cruz:

Republican Sen. Ted Cruz received an eight-minute standing ovation upon his return to Texas this past weekend, despite an extended, hostile campaign from Democrats and the mainstream media to portray him as a dangerous extremist.

Thanks, Daily Caller, for noting that the hostile campaign to portray Ted Cruz as a dangerous extremist is a ludicrous notion from the MSM and crazy libruls. Because causing billions of dollars to the economy FOR NOTHING is totally cool and not dangerous or extreme at all, no siree.

Anyway, WTF, Texas?!?! An eight-minute standing ovation for this buffoon? If you like him this much, please keep him. Seriously, appoint him head of your Canadian relations or something, but whatever you do, please don’t send him back to D.C. because he sucks harder than Rick Santorum at the annual Pennsylvania Goat Blowing Championship.

What did this Princeton & Harvard Law grad have to say to the little people?

“After two months in Washington, it’s great to be back in America,” Cruz said Saturday to approximately 750 people at an appearance in a San Antonio hotel ballroom…

And what was the point of Ted Cruz spewing discombobulated nasal syllables from his crooked, whiney ass-face?

Cruz also criticized members of his own Senate caucus for, “failing to stand with House Republicans against the train wreck that is Obamacare.”

As we all remember, Cruz bravely had a not-filibuster for 21 hours that made absolutely no difference whatsoever. And then, when he could have actually mounted a filibuster on the final bill, he didn’t do anything, because by that time he already had some 2 million emails to start his 2016 mailing list.

Yet it was his fellow Republicans who were unwilling to further damage the U.S. economy and plunge the world into a ginormous global recession who were the real problem. If they had only held together, it was only a matter of time before B. Barry Bamz came to his senses and realized that providing affordable health care to millions of citizens was a terrible idea, and would have single-handedly repealed Obamacare forever and made Ted Cruz the new Secretary of Health and Human Services.

As we all learned from Sandra Bullock’s masterpiece, Speed, you have to be willing to shoot the hostage. In this case, that means global economic turmoil for the sole purpose of denying health care to millions of Americans.

Aren't we all glad we get to revisit this whole debacle in early 2014? At least that gives us plenty of time to stock up on liquor.