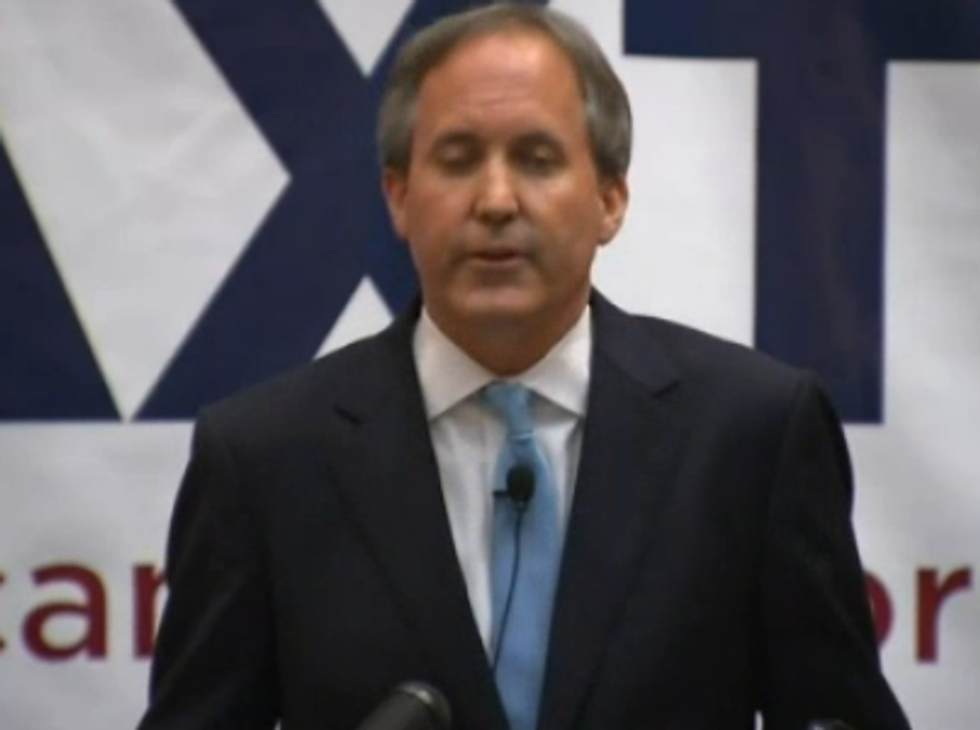 Texas is pulling out all the stops to make sure the gay-marrieds are completely unable to mess with Texas, right up until June, when the Supreme Court is probably going to mess with Texas in such a gay way that they'll be walking funny for days. Today's Texan hero is Attorney General Ken Paxton, who has filed a lawsuit against the overreaching federal government, because they don't want to give family leave to gays who have sick, gay spouses:

Under the proposed federal rule to take effect March 27, the definition of “spouse” would be revised to include gay partners who were married in a state that recognizes same-sex unions. The new rule would direct state agencies to grant family and medical leave benefits to all such couples.

Paxton said the Texas constitution holds that such unions cannot be recognized and therefore he is advising state agencies to follow state law and not the federal rule.

“This lawsuit is about defending the sovereignty of our state, and we will continue to protect Texas from the unlawful overreach of the federal government,” Paxton said.

A press release on the AG's website states that they are seeking "temporary and permanent injunctive relief" from having to abide by federal law, because Texas is sovereign, goddammit! The lawsuit states that having to abide by the Family and Medical Leave Act will cause "irreparable harm" to Texas employers -- at least for the remaining three months before the Supreme Court rules on the issue once and for all. And of course, the Fifth Circuit could rule on Texas, Louisiana and Mississippi tomorrow, and they are very likely to kill Texas's gay marriage ban dead when they do, but in the meantime, be assured, this is completely destroying the lives of all Texans RIGHT NOW.

Towleroad points out that the FMLA doesn't even require employers to give people paid time off or anything like that, but simply "guarantees their health insurance will continue and grants them 12 weeks of unpaid, job-protected leave per year 'to care for the employee’s spouse, child, or parent who has a serious health condition.'" This would seem to be no big, as they're already doing it for straight couples, but we guess gay workers are just so VALUABLE in Texas that no company in its right mind could possibly go without them for even a day, because they're taking their gay husband for cancer treatment or something.

Of course, this is Obama's fault, as most things are:

After the Supreme Court ruled against the Defense of Marriage Act in 2013, the Obama administration sought to extend the federal benefits of marriage to the furthest extent possible under the law.

But FMLA by regulation looked to the state of residence, not the state of celebration, to determine whether a couple is married, so for a time married same-sex couples in non-marriage equality states were ineligible for benefits under that law, which enables an individual to take time off from work to care for a spouse.

How dare that tyrant Obama do everything in his power to make sure gays and lesbians are treated equally? It's like he thinks he's president or something.

Watching Texas prepare for the throat-cramming of marriage equality has been almost as fun as watching Alabama. Ken Paxton is suin' the feds. That rep lady Molly White has filed her bill that says Texas does not EITHER have to obey the Supreme Court. White's colleague Cecil Bell is gonna take away the pensions and salaries of any clerks who even THINK about issuing marriage licenses. And of course, Texas GOP Chair Tom Mechler has threatened to cancel his subscription to the morning paper if they ever print a picture of ew, boys kissing.

Of course, none of their plans will actually work, but at least they can say they stood athwart the homosexual deluge and cried, "Goldurnit!"