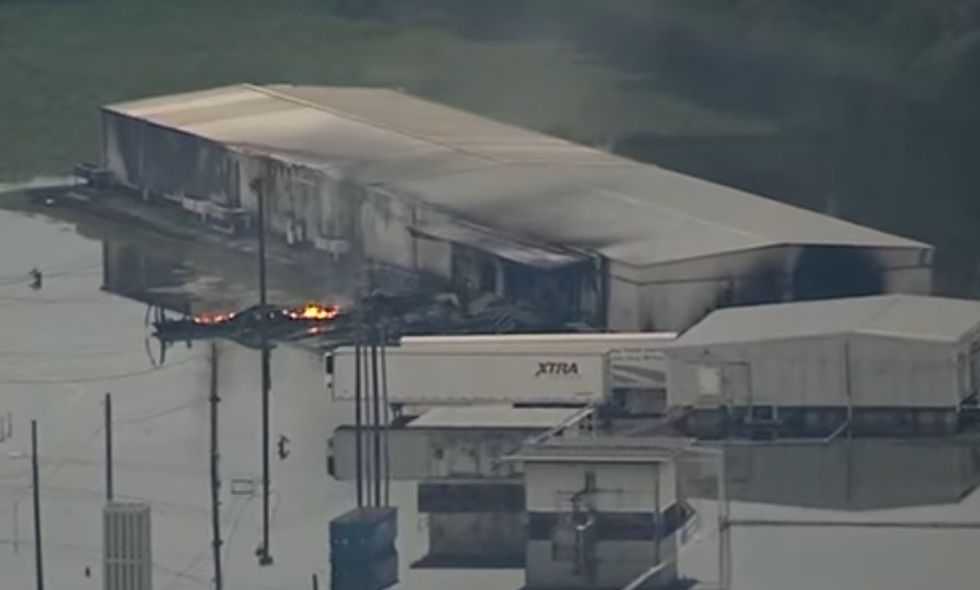 Several emergency personnel who responded to the definitely-not-an-explosion and fire at the Arkema chemical plant in Crosby, Texas, are suing the French-owned chemical manufacturer for more than $1 million, claiming plant operators minimized the dangers of entering the area. The suit argues the company should have taken better precautions against the chemicals losing refrigeration, which led to their spontaneously igniting in the early morning of August 31.

Despite past flooding events and advance notice of the impending destruction of Hurricane Harvey, Arkema "ignored the foreseeable consequences of failing to prepare," the suit claims, leaving trailers of volatile chemicals susceptible to explosion after flooding knocked out the electricity and ability to cool the heat-sensitive compounds.

After the plant lost power and its emergency back-up generators were flooded by over six feet of water from Hurricane Harvey, workers at the plant moved containers of the organic peroxides into nine refrigerated trailers around the plant grounds. The flooding eventually began causing the trailers' refrigeration to fail as well, and the remaining plant workers were evacuated August 29. The plant owners warned local officials that a fire and possible explosions would be "inevitable" as the refrigeration units ran out of fuel, and a 1.5-mile radius around the plant was evacuated.

Maybe it was an 'explosion,' but really, it was more of a vigorous 'overpressure' and 'rupture' of a container, OK?

While Arkema initially described the explosion as "an explosion," local officials went to comical lengths to avoid using that word; Harris County Fire Marshal spokesdude Bob Royall said, "We’re on the same page. It’s a matter of terminology. I call it a chemical reaction and an overpressure of the container." And some calls it a Kaiser blade, mmm-hmmm.

The lawsuit alleges that when the first trailers caught fire sometime after midnight on August 31, Arkema should have warned emergency responders to stay farther away.

"Although the explosions had occurred, no one from Arkema alerted the first responders who were manning the perimeter of the arbitrary mandatory evacuation area," lawyers said Thursday in a press release. "Immediately upon being exposed to the fumes from the explosions, and one by one, the police officers and first responders began to fall ill in the middle of the road."

The lawsuit says that police officers and emergency medical personnel arriving on the scene were getting sick before they even got out of their vehicles, and that when more responders came to help the first ones, they too became sick:

“Emergency personnel arrived on scene, and even before exiting their vehicle, they became overcome by the fumes as well,” the lawsuit adds. “The scene was nothing less than chaos. Police officers were doubled over vomiting, unable to breathe. Medical personnel, in their attempts to provide assistance to the officers, became overwhelmed and they too began to vomit and gasp for air.”

In addition, while some first responders were transported by ambulance, some of the police officers were unable to leave their vehicles behind because they had weapons in them, so the officers had to drive their own cars to the hospital. Expect a new reality show, "Vomiting Choking Cops With Guns," to debut on basic cable this fall.

The suit singles out Arkema officials Richard Rowe and Richard Rennard for downplaying the potential dangers of the fumes from the fires. The two held

press conferences at which they "repeatedly denied that the chemicals were toxic or harmful in any manner," the lawyers write. "Plaintiffs relied upon these representations and suffered serious bodily injury as a result."

As the Washington Post notes, company officials went to great lengths to avoid using the word "toxic" to describe the burning chemicals, preferring to say the smoke was a "nontoxic irritant."

When pressed by reporters at an Aug 31 news conference, Rich Rennard, president of Arkema’s North American operations, said “the smoke is certainly noxious.” But he added that toxicity is “a relative thing.” And he said “it’s not a chemical release that’s happening, and I want to be clear about that.”

The company's tone was echoed by Harris County officials; Sheriff Ed Gonzales insisted the fumes were not toxic, and variously described the smoke as being like "standing over a burning campfire" and "basically like standing over a barbecue pit or something like that, where you get smoke in your eyes." Or maybe it's like when a lovely thing dies.

Asked at a news conference whether the smoke and ash were "more dangerous than something from a campfire or normal fire," Arkema's Rennard said "it’s debris that would be similar to a house fire." Especially if the burning house manufactured volatile chemicals used in the production of plastics, countertops, and adhesives.

The lawsuit also asks the court for a restraining order to prevent Arkema from destroying any records, photos, or documents related to the chemicals' storage and the flooding at the plant. In addition, the Houston Chronicle reports that 20 homeowners near the plant have asked to join the lawsuit, saying the residents "claimed to have seen balls of tar fall in their yards and some claimed a tar-like substance covered their roofs after the explosions." In Texas, government officials probably call that stuff "Prosperity by-products."

WaPo reports that the EPA is opening a separate investigation of the Arkema plant, and has ordered Arkema to

provide a detailed timeline of events and to respond within 10 days to questions about the handling of organic peroxides, which are combustible if not kept refrigerated, the amount of chemical materials, and the measures taken in advance to guard against flooding and loss of electricity.

Sounds like some folks at the EPA are still insisting on doing their jobs instead of fluffing for industry and administrator Scott Pruitt. Don't they know that too much regulation -- i.e., any regulation -- is burdensome? Hope they didn't mention climate change, or they'll really be in trouble.

Yr Wonkette is supported by reader donations. Please click the "Donate" clicky -- we promise our asks for money are merely noxious, not toxic.