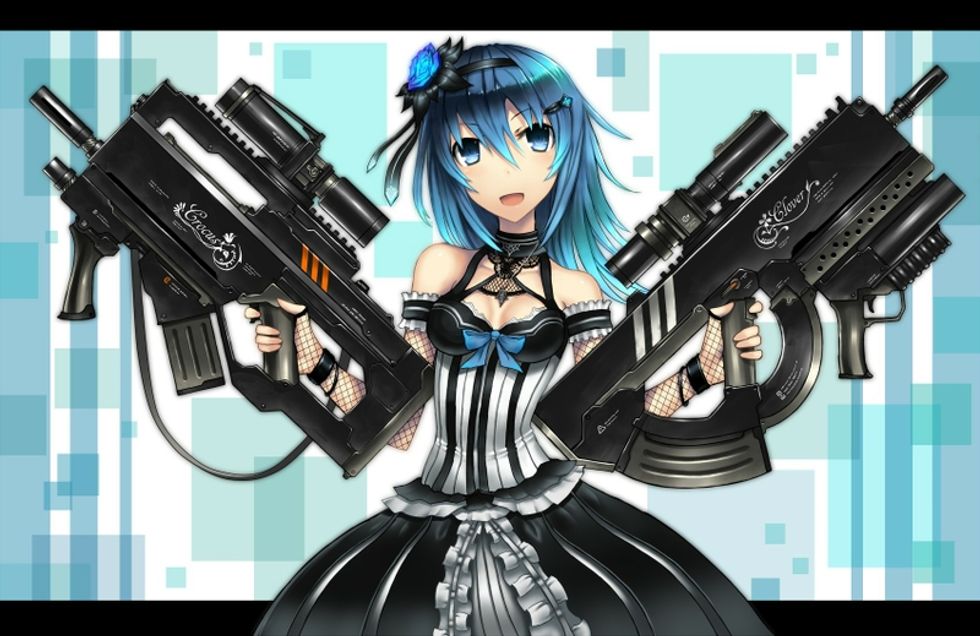 Terrific news for freedom and stuff in Texas! Gov. Greg Abbott signed two great big gun laws on Saturday, making it legal for Texans with permits to carry handguns openly, and for concealed carry permit holders to carry their guns on college campuses. But don't be fooled! Wackaloon Open Carry Advocate Kory Watkins wants you all to know that if you really loved the Second Amendment, you'd recognize that Abbott is a tyrant, because there's nothing in the Constitution about permits. So far, he hasn't specifically called for Abbott to be executed (after a fair trial for treason), but then, Watkins thinks most of Texas's elected officials need to swing from the tree of liberty.

Abbott issued a statement saying he was "proud to expand liberty in the Lone Star State," and also did not find anything the least bit ironic about the fact that he signed the bills just a few hours after a James Boulware shot up the Dallas Police headquarters and was killed by a police sniper. Boulware was a well-armed fan of conspiracy theories with a history of mental illness and domestic violence, who managed to acquire an armored van and an impressive pile of weapons. But that little fuss has nothing to do with the new gun laws, which are about getting guns into the hands of law-abiding folks, not crazy maniacs who will act irresponsibly. Abbott gunsplained that there's no connection between the easy availability of firearms and senseless violence:

“The event in Dallas was an isolated incident by someone who had serious mental challenges, as well as a possible criminal background,” he said. “It is no indication whatsoever of empowering people with their Second Amendment right. In fact, the contrary is true.”

“I don’t think there are any groups in this state — or in this nation — who worked as profoundly to ensure that the Constitution is lived up to,” he said.

On Facebook, Open Carry Tarrant County leader Kory Watkins complained, "Greg Abbott is a tyrant. No strict constitutionalist would have signed that crap bill for open carry." You see, since the Constitution doesn't mention anything about needing a permit, it is actually illegal for any state to require gun permits, or indeed have any regulations on guns at all (as all gun-humpers know, the "well-regulated" part of the Second Amendment only means that you have to be good at shooting whatever bangstick you have handy, because Old Dictionaries). In other comments, Watkins argued that there's nothing "open" about the new open-carry laws:

you are okay with paying a tax, getting your fingers printed and asking for persmission [sic] to bear arms? Also, the police can violate your 4th amendment right if you decide to express your 2nd amendment previlage [sic] to bear arms. You got to be kidding.

Watkins also vowed to ignore the new law's licensing requirement, saying, "I carry anywhere. I dont [sic] give a shit." He is a man who knows his God-given rights, and also does not care that his multiple misdemeanor convictions -- mere youthful burglaries -- disqualify him from getting a Texas handgun permit. Because real heroes break unjust laws, just like Martin Luther King did.