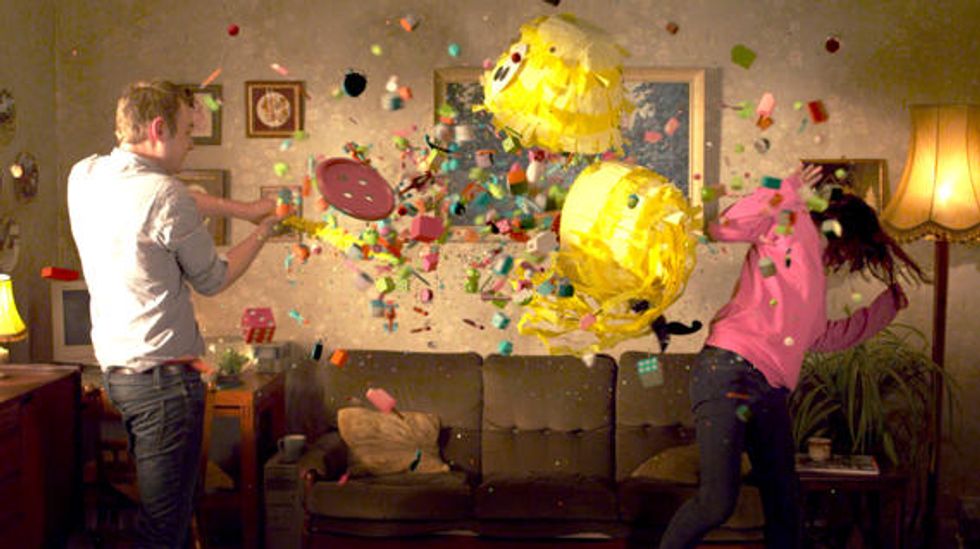 A pair of Austin landlords wanted some extra parking space for their upcoming SXSW event, so they decided to bulldoze the piñata party store belonging to two of their Mexican tenants. And no, they didn't bother to notify their tenants beforehand, because they'd figure it out soon enough when they showed up to work and saw their building was gone.

Tenants Sergio and Monica Lejarazu -- the owners of Jumpolin, which had been at that location for eight years -- say that at no point did their landlords inform them that their business was going to be demolished. In fact, it seems the demolishers didn't even check to see if the building was still occupied because fuck it, not their job.

Landlords Jordan French and Darius Fisher (owners of F&F Real Estate Ventures) claim they destroyed the Lejarazus' livelihood because they didn't receive the couple's February rent check, which is more than a little suspicious because F&F Real Estate Ventures filed for the demolition back in January. The Lejarazus also conveniently made a video of themselves paying their February rent, which they say was necessary because their landlords keep claiming not to have received the Lejarazus' rent payments. And yet, the landlords admit the couple has not defaulted on their lease. Even more suspicious, the landlords issued an eviction notice to their tenants only two days before they demolished the building, and gave no indication that a demolition crew was coming. That'd just spoil the surprise!

When asked why he would do something so nakedly corrupt as destroy a couple's business for some free parking, French said, "Say you have a house that was infested by roaches. You have to clean that up.”

But wait -- didn't the landlords say they demolished the building because their tenants didn't pay the rent on time? Also, whoa, buddy! This story just took a turn from corrupt to corrupt and fucking racist. We honestly expected something more subtle and passive-aggressive from a Vanderbilt grad, but nope. He just lays that racism right out there for the world to see.

Even the Interahamwe spoke of killing the cockroaches in code, dude.

French went on to speculate that the Lejarazus, who are of Mexican descent, couldn't be making a living selling piñatas, telling the reporter the couple must be dealing in “uncontrolled substances.” [...]

“Probably their livelihood was selling helium and stolen bicycles,” French said. “They weren’t making a living selling piñatas; they were selling something else. I don’t want to speculate what that is.” However, he went on to suggest that it was likely “uncontrolled substances.” “That’s just my opinion, though,” French stated.

I don't want to speculate, but excuse me while I speculate.

What French seems to be insinuating is that the Lejarazus are criminals who were illegally selling bicycles and helium out of their store (since they also sold balloons and moon-bounces). While Mr. Lejarazu was arrested back in May for purchasing two stolen bikes from a police officer, there's no indication he knew they were stolen at the time, and the leap from that to "illegal helium smuggling cartel" is pretty steep.

It seems French and Fisher are going to get away with this in criminal court since they did file the necessary paperwork with the city to get the demolition done, and it's technically not illegal to demolish without informing your tenants. That doesn't mean, however, that they're going to get away with it in civil court. The Lejarazus' lawyer has filed a motion on behalf of the couple, and a judge has ordered that all construction at the site stops until the case is heard. Also too,

On March 12, Texas State Representative Eddie Rodriguez, whose district includes the former Jumpolin site, filed a bill that would make it illegal to demolish property without notifying tenants.

“It’s such an unconscionable act, that the city had no reason to think that someone would lie on a demolition application,” Doran Peters said.

Look, City of Austin, we know you like your reputation as patchouli-huffing hippies, but yes -- people actually can lie, Especially when there's money to be made.  Now stop that sniffling and help the nice piñata people.