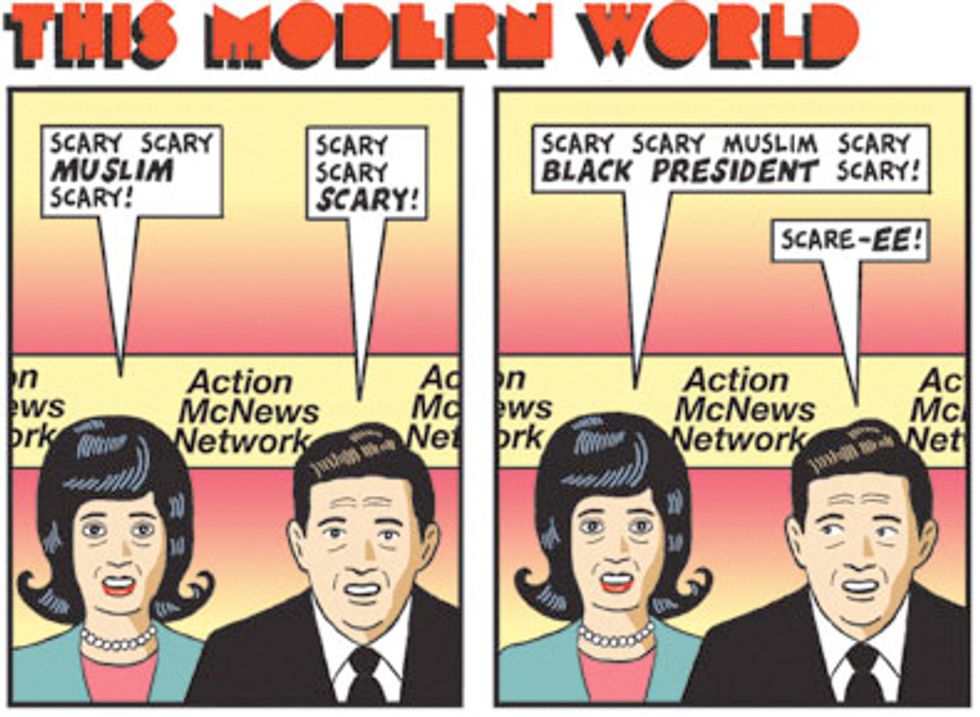 It's getting to where there is just no freedom at all anymore. Look at poor Jo Lynn Haussmann, a recently elected member of the school board in Keller, Texas, who was only trying to emphasize the importance of voting last week when she posted this important message on her FacePlace account:

"Do you realize because SO FEW voters took the time and responsibility to VOTE in the municipal elections - YOU NOW HAVE A 'MUSLIM' on the City Council!!! What A SHAME!!!!"

See, that is just Voter Education. But since a teevee station aired a screengrab of the now-deleted comment, Haussmann has apologized for it, although it's not yet clear whether she'll be held accountable for her crimes against punctuation.

Haussmann's campaign website emphasizes that "It is imperative to have Christian Conservatives who are fiscally responsible on our school board!" We aren't sure whether freaking out about a Muslim on the City Council is supposed to be "Christian" or "fiscally responsible" -- probably the latter, since all those fancy Muslim footbaths cost a lot to install.

In her very, very sincere apology, which she meant sincerely, she explained that she only made the screamy multiple-exclamation-point post because other people were worried about the heathen Musselman:

I am sorry for the hurt that I have caused. Several people had complained to me about the changes in the council make up and my statement was in relation to that.

So basically, that public freakout was just constituent service.

But now she's really sorry, and even spoke to the new city councilman, Shahid Shati, on the phone, and will apologize in person when they meet.

RawStory notes that Haussmann really does like shouting on internet comments, noting that she's left YouTube comments like this fine commentary on a video by "Wild Bill for America":

DON'T SELL OUT YOUR COUNTRY TO BE A SOCIALIST/COMMUNIST NATION BY NOT VOTING "ROMNEY!" If you don't vote, you've voted for Obama! YOU "MUST' VOTE! I'd rather have a Mormon with HIGH MORALS than a muslim! Mormons DO NOT support abortion or same sex marriage. MAN UP & VOTE FOR ROMNEY to return God's mercy & grace to America!! No to Romney means No to God as God DOES NOT condone sin and abortion (murder) and same sex marriage is sin.

When someone pointed out that Muslims don't support abortion or gay marriage either, Haussmann said that just proved that not only is Obama a Muslim, he's a hypocrite, then:

RIGHT! That's what I said,'MORMONS DO "NOT" SUPPORT ABORTION OR SAME SEX MARRIAGE!" If Muslims aren't for it, then why is Obama and all of his muslim followers supporting it? Why is HE not decapitated!?!

Hey, Texans, do you realize because SO FEW voters took the time and responsibility to VOTE in the municipal elections - YOU NOW HAVE A YOUTUBE TROLL on the School Board!!! What A SHAME!!!!

Follow Doktor Zoom on Twitter. He's pretty sure his Wonkette comment history excludes him from holding office almost anywhere. Or it would, if Wonkette allowed comments.