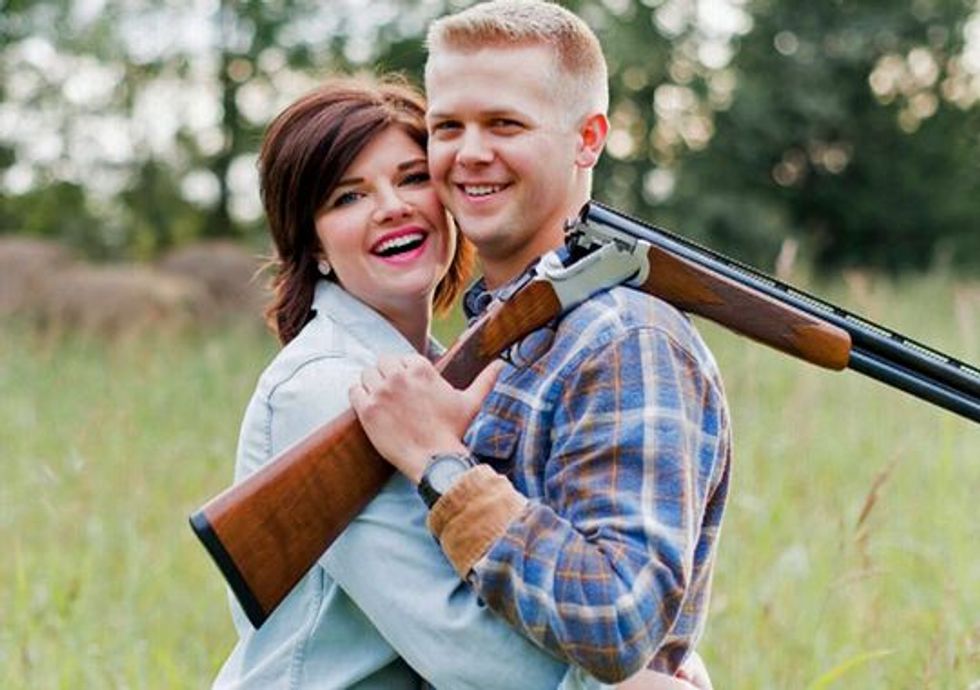 Yr Wonkette likes to think we are firmly in the radical gun-grabbing kneejerk pantywaist big sissy liberal portion of the political spectrum, but once in a rare while we find ourselves reading about something that is so idiotic that Even the Liberal Blog Wonkette has to agree it's just too stupid for words. For instance, this story from Dallas about a nice couple, Stephanie Wehner and her fiancé Mitch Strobl, who submitted a packet of engagement photos to Walmart for copying. The photos came back with one photo missing -- a tender loving picture of the gal, the beau, and the beau's first true love, a "12 gauge Ruger Red Label Shotgun," the very first gun he bought himself.

Now, Yr Wonkette is openminded and if this couple wants one of those modern Open-Carry Marriages, who are we to judge? But apparently the picture was just too crimey for the photo lab at Walmart, which not only didn't make the requested copies, it also refused to return the original to Ms. Wehner. A clerk at the store explained that it was "store policy" not to reproduce any picture containing a weapon, which you might suppose would be a not terribly rare thing in Texas. And when Wehner pressed for a reason, the clerk boosted the stupid into the ionosphere: The store, she said, wouldn't process any photos that promote "gang culture." Gang culture? A nice clean-cut non-gangy couple like these sweet kids? (You know what makes them non-gangy, right? That's right: The lack of tattoos.)

Shocking! Horrifying! Unbelievable! The Gays can force businesses to make them penis cakes, but a decent hardworking American couple who simply want a sweet photo showing their love for each other (and a shotgun) can't get any respect? What is this world coming to?!?! Also, just to get this straight: You can buy a shotgun at Walmart, but you can't get photos of a shotgun processed at Walmart?

Oh, except for one small problem. Far down in the piece, you finally find out the reality: Walmart doesn't actually have any such policy:

A Walmart representative later told News 8 the chain has no policy against printing out pictures with firearms.

"We had a new associate who was misinformed. Her actions are not consistent with our policy," the spokesperson said. Walmart also told us that it has reiterated policies with its employees at this store.

It's unclear whether this information is an update, or if the station knew about it from the beginning. It's just sort of tossed in there, and whenever it was added, there was no attempt to call attention to it. In the WFAA video, this minor detail finally gets mentioned after a full minute and thirty seconds of the couple's heartbreaking story, the poor dears.

Needless to say, the story about Walmart's horrific assault on both the First and Second Amendments quickly made the rounds of the Wingnuttosphere Thursday; of the several barking pieces we sampled, a few mentioned the information that there is no such policy, (but still tut-tutted about the overreach of anti-gun culture that empowered a single raving anti-gun hater to oppress the happy couple), while several simply went with the story that Walmart will not print pictures including guns. And of course, even when that information was included, commenters on the article saw only that Walmart Did a Thing, and started calling for boycotts and lawsuits. Even the Houston Chronicle went with the story, although it did at least emphasize that it was one employee's mistake, not corporate policy.

This is some pretty cool journalism, WFAA. Guess we'll go ahead and run with that exposé we've been planning about how it's Kroger's official policy to let that one bastard with a good 25 cans of cat food in his cart go through the express lane right in front of us, the "15 items or less" sign be damned. Also, it's "fewer," you monsters.