Thanks For Building the Capitol, Slaves! 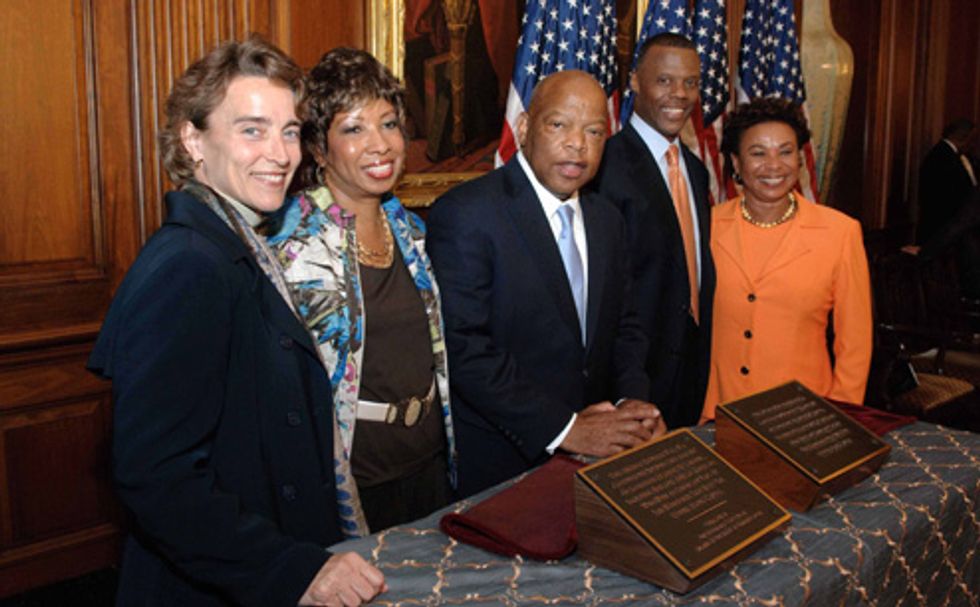 Did you think DC is called the "Chocolate City" because of how pretty much every family values politician/pederast coaxes his interns under his desk with melted Snickers? Well, that is one reason! Another, however, is the black people. There are literally hundreds of black people in our nation's capital at any one time, sometimes within mere feet of the whitest men in the America, Jake Tapper and George Will and Alan Keyes.

To begin, here's a story I bet you haven't heard, about a time a couple weeks ago that all your favorite congressional weirdos got together for this INSANE thing that should definitely not have happened in the way it did:

The backstory for this incident is slavery, which we shouldn't get into very deeply because it takes from the laffs. But trust: slavery was fucked! So fucked, in fact, that, in the year 2000, some congresspeople whose decency hadn't yet wholly rotted were like, "Hey, let's maybe do something to credit the black people our early iterations ordered to build the Capitol, under punishment of death." Everyone agreed this was a good idea, because politicians are constantly looking for ways to sate minorities enough to not have their tires slashed, which is what should happen, constantly.

Anyway, a thing with the menacing name The Slave Labor Task Force was convened, and 10 years later, this collective had an idea. No, not reparations -- what are you, a militant Muslin? -- something much better: plaques! TWO plaques.

Yes, in May of 2010, an entire decade after it decided to do something to honor the slaves who built the Capitol Building, The Slave Labor Task Force had a ceremony to unveil a couple of bronze plaques, for the walls, for all the obese tourists to look at and say through their Blow Pop gum, "Oh! Slavery! It certainly was fucked, BUT THESE PLAQUES ARE SO BEAUTIFUL! Look at these plaques, kids!" But by then the kids are already thinking about Justin Bieber's abs or whatever and so to hell with your plaques, stupid parents. Why didn't we go to San Diego?

Congressman John Lewis from Georgia was at the ceremony, which was kind of sad because he used to hang with Martin Luther King Jr. until civilian complacency and government bureaucracy forced him to be all, “Check ‘em out -- plaques!” John Boehner was also there, orange and grumbling and sort of unamused to the point that you could almost see the “Rather Be Fishin’” sign hanging on his brain.

Maryland doofus Michael Steele got the day off from his normal job -- making balloon animals at the Romano's Macaroni Grill in Chevy Chase -- to sit in the second row at this laughable sham. He and JC Watts giggled when Harry Reid bragged during his speech about how he shared a last name with a very famous slave named Philip Reid, whose smarts you should read about here. It was weird how everyone thought that was funny, because what Reid was basically saying was, "My ancestors very well may have owned such a smart black man and forced him to do a whole lot of shit he didn’t want to do." Funny stuff.

All the rest of the speeches were also grindingly terrible, as was the coffee, but nothing compared to when Blanche Lincoln got up and described her fantasy of what the slaves who built the Capitol must have been thinking while toiling in rock quarries: “Do justice, love mercy and walk humbly with our God.”

YES, Blanche! The slaves weren't thinking anything like, "I wish these evil bastards would let me go find my wife and daughter, who they sold away to be raped, instead of beating me up and forcing me to build their hollow towers of freedom." That would've been unpatriotic, so they were obviously thinking about loving the Arkansas Jeebus.

The moral of this story is that Barack Obama's presidency has answered all of Black America’s dreams and that everything is fine. The plaques are very, very shiny.

Cord Jefferson covers Washington for quality publications including The Root, which recently posted his interview with Alvin Greene.