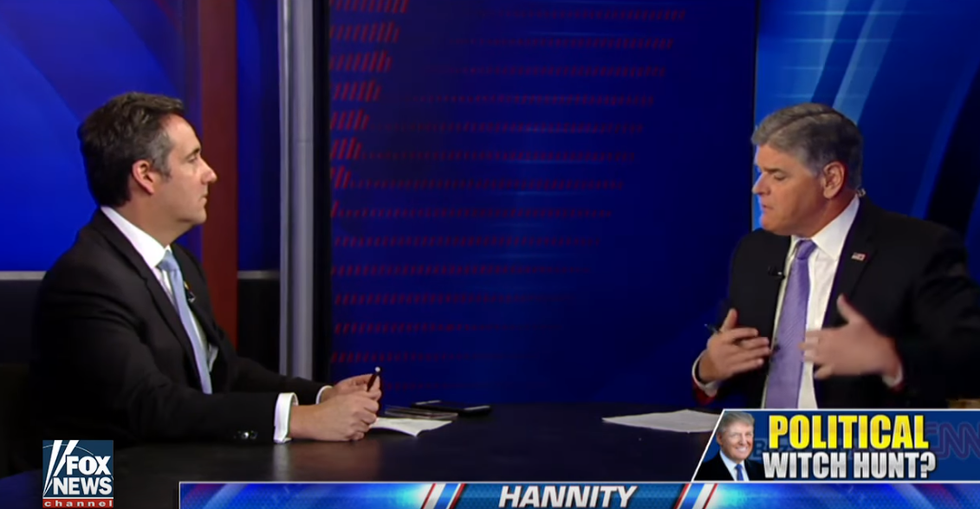 So what the hell? Is Michael Cohen really Sean Hannity's "lawyer"? On Hannity's show Monday night, Hannity said it was NO BIG and it was just "real estate" because Michael Cohen "knows real estate" (LOL) and is an "excellent attorney" (HAHAHAHA), even though expired can of meat Alan Dershowitz told him to his face that "girl you BAD for that."

But according to what happened in court Monday, Sean Hannity is Michael Cohen's FOR REAL CLIENT. And if Michael Cohen wasn't stone cold lying (who can say?), we are just guessing that whatever "work" Cohen did for Hannity wasn't exactly what anyone would call normal legal work. Maybe Hannity is freaked out because he knows Cohen doing something bad for him. Maybe Hannity is under investigation in the Russia thing, and has been for a long ass time, and he's worried the FBI is about to uncover that he, who loves Russian intelligence asset Julian Assange so much, is in far deeper than anyone imagined. Maybe Cohen and Hannity have had ATTORNEY CLIENT PRIVILEGE CONVERSATIONS (or the opposite of that) about directing what kind of conspiracy theories Hannity should cover on his show, to run interference/obstruct justice in the Russia investigation. (Like for instance the Seth Rich DNC murder conspiracy theory, about how it wasn't Russia that gave WikiLeaks all those DNC emails, but rather Seth Rich, so Hillary Wasserman Podesta Schultz killed him DEAD.)

OR MAYBE journalist Gabe Sherman, an expert on all things "Fox News," was right on "Morning Joe" Tuesday, when he said maybe Hannity and Cohen engineered a dog-and-pony show for the court, to prove Cohen is a real lawyer (he is not). Maybe Hannity said, "Make a dramatic scene about not releasing your third client, and then finally reveal it is BIG IMPORTANT PERSON MEEEEEE, because that will make you look like a SUPER LAWYER!" Could that happen? Sure! Could Sean Hannity come up with a multi-dimensional Hungry Hungry Hippos con like that? Uh ... Well hmm.

(Sherman also has reported that Hannity may have hired Cohen to go after groups like Media Matters calling for boycotts against him. Hmmm!)

Regardless, if Hannity has for real retained the "services" of "excellent attorney" and Cooley Law School's "Most Likely To Become A National Embarrassment Even By Our Admittedly Humiliating Standards" Michael Cohen, he surely never told his viewers that! We are sure those viewers, who are very smart and definitely not the biggest idiots in America, are feeling betrayed this morning, as they reflect on all the times Hannity has fluffed Cohen on the air without telling them about their special relationship.

There are many examples of Hannity doing that recently. For instance, the day of the raid, Hannity said it was an "all-hands-on-deck effort to totally malign and, if possible, impeach the president of the United States," and that it was just more evidence that Robert Mueller is "OUT OF CONTROL!" (Because the FBI is going after Michael Cohen, Sean Hannity's lawyer.) Alan Dershowitz chimed in to say it was a "dangerous day ... for lawyer-client relations" and Gregg Jarrett piled on even more, saying "Americans should be outraged" and "this is an abuse of the system." The next night, Hannity said it was an "affront to our legal and our justice system." (To go after Sean Hannity's lawyer, who is also Donald Trump's lawyer.)

And on the third day, they rose again, to keep bitching about the raid! First, there was Hannity's favorite rent-a-lawyer Joe diGenova:

I find this raid of Mr. Cohen's office so appalling in every sense -- legal, ethical professional responsibility. What Rod Rosenstein and Bob Mueller have done is weaponized in an unconstitutional way the criminal investigation process which should be sacrosanct.

And what they have done is they have conducted and are conducting now something that is called an in terrorem grand jury. They are using a grand jury to terrorize people. That is an abuse of power. Mr. Rosenstein is responsible for it.

DiGenova added that Rosenstein should be YOU'RE FIRED over this. Elsewhere during the show, Hannity claimed that raiding Cohen was just the United States acting like a common VENEZUELA!

But it's way more than just last week, as Cohen has been coming on Hannity's show forfuckingever. As Talking Points Memo notes, on January 11 of last year, just after THE DODGY DOSSIER was published, Hannity gave his friend/lawyer ample opportunity to say I HAVE NEVER BEEN TO PRAGUE! HERE IS MY PASSPORT! IT SPECIFICALLY SAYS "NOT PRAGUE EVER"! (McClatchy is still the only one with the story that Cohen totally went to Prague, just like the dossier says, and McClatchy does really good reporting work. So until or unless the story is debunked, we believe it.)

Here is some dialogue from that interview, lovingly transcribed by TPM:

“One of my best friends growing up, Michael Cohen,” Hannity responded. “And you’re one of my better friends in life. I’ve known you for a long time.”

“You were in Los Angeles. Now, I have to give a little insight here,” Hannity told Cohen later in the interview.

“You know I was in Los Angeles because—” Cohen interjected.

“You sent me a video,” Hannity said.

MICHAEL COHEN SENT SEAN HANNITY A VIDEO. (And the FBI is watching it RIGHT THE FUCK NOW!)

Here's video of the interview:

As Gabe Sherman noted on Monday, this would be a real ethical break for Hannity, if he had ethics. But he doesn't, so let's just call Hannity a bag of goat assholes and end this post.