The Atlantic Hiring 29 Journalists and an Idiot 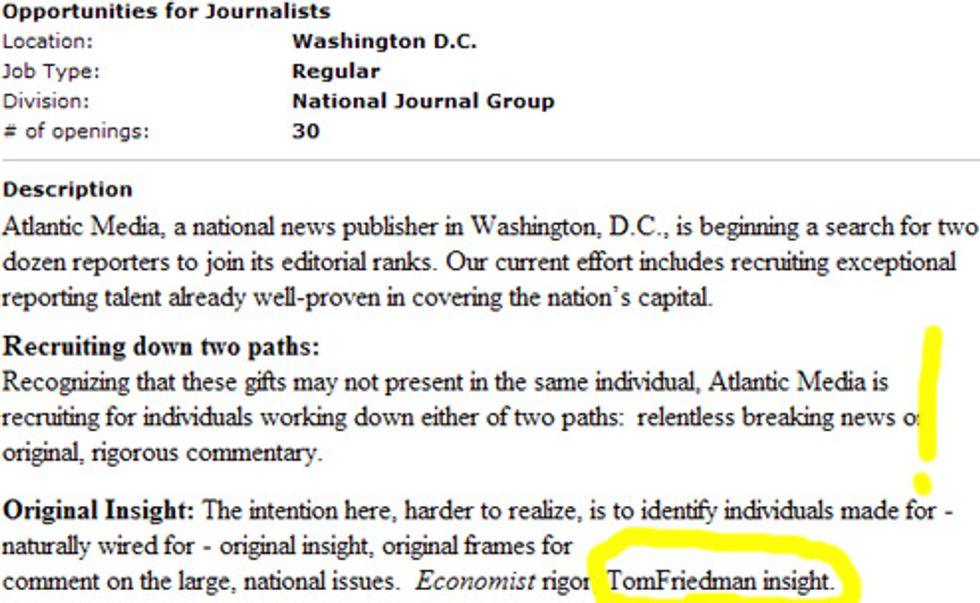 The media industry has fully recovered, as evidenced by this job listing seeking thirty (30!) journalists at the Atlantic Media Group. But Atlantic Media Group's National Journaljust got rid of thirty (30!) journalists through buyouts, so the net gain of Journalism Jobs is zero (0). Still, this is enough for a shitty trend column by banal global golfer and language rapist Tom Friedman. Wait a minute, that's just what The Atlantic needs!

Wonkette operative "Tom Y." sent along this Want Ad with the subject line, "ATLANTIC SEEKS TO CLONE WORLD'S WORST COLUMNIST," which is about right. Except for the cloning part. Atlantic Media Group clearly wants to find and groom and create the next awful conventional wisdom hack on the bestseller list, and they hope to find this Mustache of the Future while the economy's still in the toilet and every journalist fears for his or her job, every single day, until the inevitable layoff/shutdown/accidental explosion.

So, if you've been wishing the Atlantic Monthly had more in the way of 800-word brain farts by confused middle-aged men sitting in first class who just realized the logo on the napkin looks like a rising star or whatever, then maybe YOU are the new Tom Friedman, but of The Atlantic. Good luck, and enjoy the Pulitzers! [Atlantic Media job classifieds]