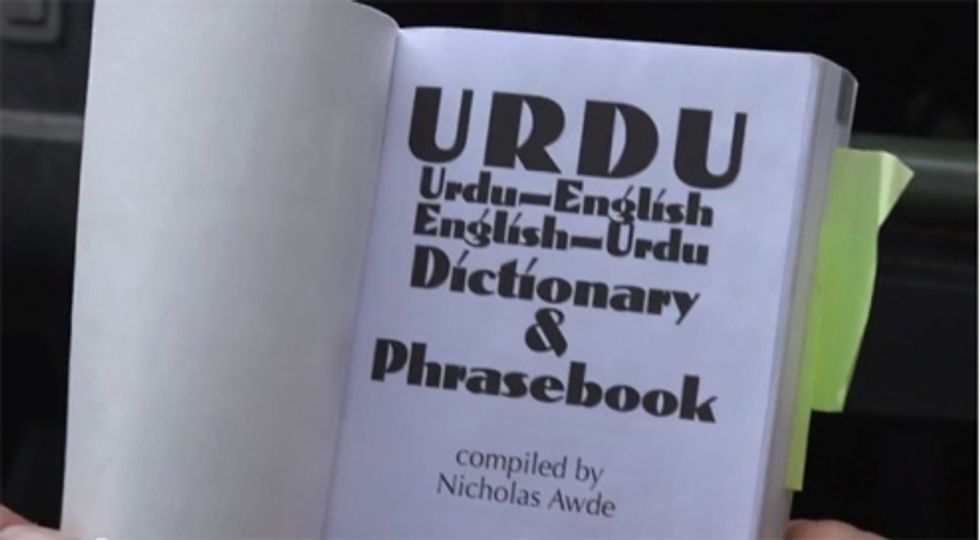 Hot on the heels of the big Breitbart scoop about that"Muslim prayer rug" (cleverly disguised as a shirt) found on the Arizona/Mexico border, the good folks at Glenn Beck's Internet Tendency went looking for some terrorist detritus of their own, and by golly, they sure found some!

An Urdu-to-English dictionary was not something Mike Vickers expected to find on the rocky earth underneath the cattle fencing around his 1,000-acre Texas ranch.

Yet there it was -- dropped, Vickers guesses, when its carrier got zapped by his fence’s electricity, and adding yet another dimension to the situation at the U.S.-Mexico border, where tens of thousands of people have been flooding into the United States.

Urdu, of course, is the national language of Pakistan. Terrified exclamation points!

Mr. Vickers says he found the dictionary, which is published in the U.S.A. by Hipporene Press (Amazon link in case you're in the market), in May 2013 and reported it to the authorities at the time. He talked about the terrifying find with video maker Chris Burgard:

In a detail that somehow didn't make it into the text of the Blaze story, Vickers said he believed that the dictionary belonged to an immigrant-smuggling "coyote," who he suspect used the phrasebook to communicate with terrists being smuggled across; this is at least slightly more plausible than the notion that some Urdu-speaking border-jumpers had brought a book in English with them from Pakistan. A Pakistani looking for a phrasebook would probably (we are guessing -- Pakistan does have a publishing industry!) start with a more convenient phrasebook printed in Urdu. Also, never mind that the 9/11 terrorists spoke English already. Maybe al-Qaeda ran out of terrorists who speak English, too.

Also, we learn that while the Border Patrol is spending all of its time babbysitting, the borders themselves are wide open, and terrists and drug gangs and father-rapers from the Group W bench are everywhere:

Numerous Border Patrol agents and other U.S. Immigration and Customs Enforcement officials interviewed by TheBlaze said that while Department of Homeland Security resources are being strained in handling the more than 57,000 children who have already crossed into the U.S., other porous areas along the border are being neglected, to the benefit of the cartels and more dangerous foreign criminal elements.

Further, says the Blaze, another unidentified Border Patrol agent told them that these crazy terrists are just stone cold dropping clues to their identity all the time:

“We’ve found Korans, prayer rugs and many other unusual items at the border that certainly raise concern,” the agent said.

This makes perfect sense, because if there's anything a fanatical Muslim terrorist is going to casually fling onto the ground, it's a copy of the Koran. That, or America doesn't have to worry too much because these are the clumsiest terrorists in existence. Just be sure to call the FBI if you see anyone with brown skin stumbling around a lot.

[The Blaze via tip from alert Wonketteer "Sean P."]