The Devil Is In the Cartoon Details 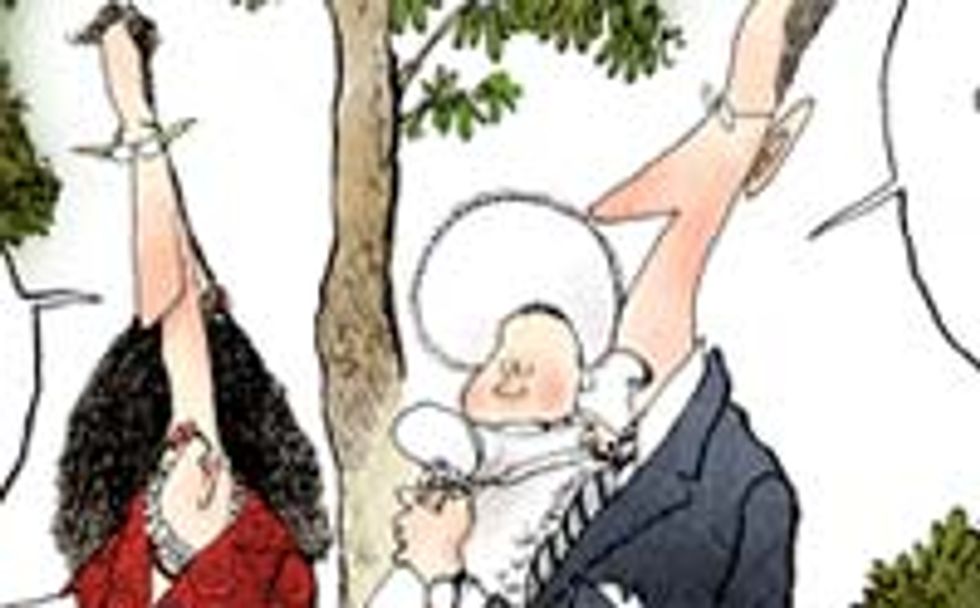 By the Comics Curmudgeon
Your cartoon correspondent has been looking at cartoons for Wonkette since roughly the Revolutionary War, during which time political cartoons haven't changed much. You'd think that a man would burn out seeing endless weeping Statues of Liberty and fat generic Congressmen and "funny" Bush/Obama drawings with big ears. And you'd be right! But every once in a while there is a little grace note in a cartoon that needs to be shared with the world, and that serves as a reminder of the rewards of this comics-mocking gig (other than the chicks, and the money, and the political influence).

Oh, look, it's John Boehner's big, haunted eyes and sagging leathery face! You may dispute that this is an example of an artistic "grace note," but this is about as good as it gets in the political cartooning biz. Boehner actually has a pretty interesting (and by "interesting" we mean "weird") look, even going beyond his orangey drunkard's tan, with his sad blue eyes being particularly striking; they're captured nicely here, along with his jowls. It's about time that political cartoonists got down to the business of learning how to really caricature him, as he will soon be Speaker of the House, after the Democrats lose every single House seat in the fall, and then his face will be on TV all the time, glowing like a thousand sunsets.

But it isn't all about funny drawings of famous people! Check out this baby. He's being held by some smug parents who are saying smugly mean things about the economy, as is required by the law of their universe (a Michael Ramirez cartoon). But man, that baby! Isn't it just the smuggest baby you've ever seen, radiating a self-satisfaction that goes far beyond either nature or nurture? What's its secret, I wonder? Is it the bonnet? Is it possible for a baby to wear a 19th-century bonnet with out falling prey to terminal smugness?

Sometimes these details actually end up undermining the ostensible point the cartoonist is trying to make. For instance, in this cartoon, Virginia Attorney General Ken Cuccinelli is being mocked for spending his time on big-issue grandstanding that will advance his political career rather than on doing his real job: fighting for the rights of Virginians, in a legal-type sense. But look more closely! You can see that in this courtroom, Cuccinelli is actually trying to win justice for a constituent. That poor woman on the stand is the victim of one of the most horribly botched boob jobs in medical history, and Cuccinelli is determined that the plastic surgeon who did that to her will pay! The judge and the man standing next to the AG may object, but Cuccinelli has removed their mouths, for justice.

Sometimes the detail is not visual, but a concept hidden like an Easter Egg in the overall comic milieu. For instance, at first glance you'd see this cartoon and think, "Oh, yeah, sure, Nancy Pelosi is the commander of a flying saucer, and she's sending her robot jack o'lanterns to attack simple, decent Americans who don't believe in freedom in religion! Makes perfect sense!" But you have to think about it for a minute to get the hidden joke: See, Pelosi is calling for "probes," and it's a well-known fact that space monsters routinely "probe" the anuses of the innocent humans they capture, just like Pelosi and her communist Congress have been "probing" us for the past four years, by reforming health care and such! Get it? It's about buttholes!

In unrelated news, Abe Lincoln was a Jew, it seems? EVERYONE DOUSE THEIR $5 BILLS WITH HOLY WATER, JUST TO BE SURE.