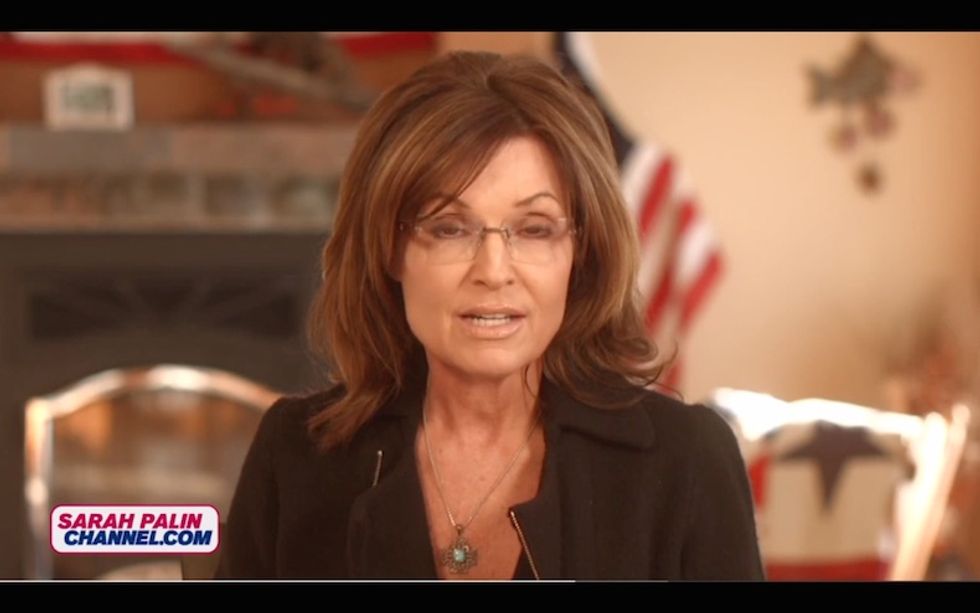 The Sarah Palin Channel is running out of things to say. The former governor of Alaska published less than six full minutes of content this week, and her longest video (clocking in at 2:17) focused on a four-year-old tale about the muzzling of a conservative student newspaper at the University of Minnesota, blah blah blah, it is just the most boring story about "free speech" you have ever heard.

Palin did, however, manage to create not one but TWO fear-mongering videos about the gathering threat posed by The Mooslims. In one of those videos — focused on the sociopathic bromance between Boko Haram and ISIS— Governor Quitterface starts the bald-faced lying early.

Well, President Obama's war against ISIS, it's going so well that ISIS is expanding.

ISIS is, by almost any measure, losing ground. The group failed to take the city of Kobani, and they failed in large part because President Mom Jeans bombed the living shit out of them. ISIS has been driven out of Tikrit, with a few remaining defenders cut off and encircled near the Tigris River. The group's revenue streams have been decimated, and their fighting formations are beginning to experience desertion among the rank-and-file.

"Damn the factual torpedoes!" Palin screamed into the arctic wind. "Full snow-machine ahead!"

Oh, cool! Yr Wonket was not aware that it was possible to suddenly extend one's sovereignty to faraway realms just because some of the people there pledge allegiance to you. Sarah Palin and Vladimir Putin seem to have more in common than a narrow maritime border.

At one stroke ISIS has added a new center of operations, thousands of new fighters, and thousands of square miles to its jihadist empire.

This is why Palin's never coming back to politics. Her preceding sentences were carefully constructed half-truths, the kinds of non-lies that a good communications team can spin. But the idea that ISIS has gained "a new center of operations" is laughable to members of the reality-based community who recognize that ISIS is unlikely to send manpower or materiel to West Africa when the group is already facing so many foes so much closer to home.

And the rubes? The rubes continue to eat this shit up! Here are some of the comments on Palin's video about Boko Haram, which, again, is completely full of stupidity and lies.

Yr Wonket is legitimately concerned that commenter "patriot1952" is having a stroke. We have sent him a private message asking him if he smells burnt toast.

These people and their quotation marks...

These people become like your family when you spend enough time with them. Oh, and here's the video.