The Foreigns: They Can't Draw 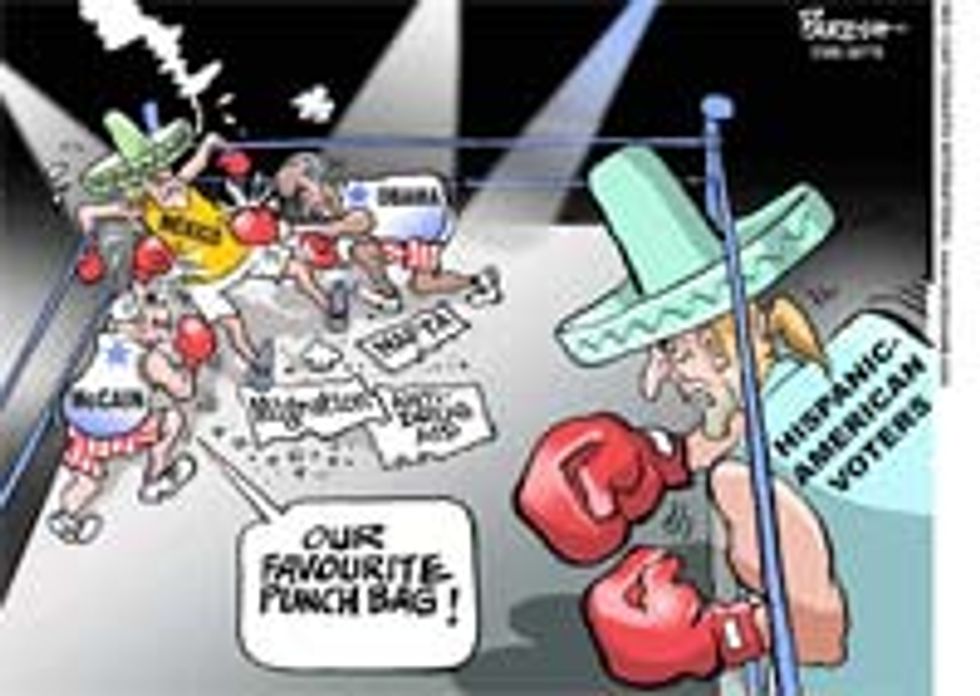 By the Comics Curmudgeon
Greetings, Wonketteers! Your Comics Curmudgeon is back at work, reading the political cartoons so you don't have to. Except ... after a grueling two weeks spent vacationing among the Foreigns, it can be hard to readjust to life in the bitter clingy land of my birth. Most doctors will tell you that making the transition back to Americanness too quickly can be bad for your health! Thus, to avoid possible brain fevers and nasty rashes, this week's Cartoon Violence will focus on cartoons from the Foreigns, to find out what they think of our beloved presidential candidates! See our future leaders through a crazy fun-house mirror, after the jump.

Wacky Foreign take: While the easily beguiled Americans have decided that Obama is "handsome" and "charismatic," the Koreans, with their refined standards of beauty, see him for what he truly is: an obese version of Eddie Munster. Also, being all too aware of the precarious state of the American banking system, he prefers to carry all of your campaign donations in cash, stuffed into the front of one of his finely tailored suits.

Wacky Foreign take: Barack Obama, 2008 = Will Smith, circa Fresh Prince of Bel Air. Also, the Brazilians apparently believe that Barry is prone to sneaking up behind America and gleefully surprise-sodomizing it. Silly Foreigns! Everyone knows that's Republican territory.

Wacky Foreign take: African-derived Obama has crushed the poor white lady with his Africa-shaped foot! It's a well-known anthropological fact people's feet reflect the continent from which their genes derive. In fact, that's why Hillary was so easy for Obama to stomp on: her Europe-shaped feet made it difficult for her to stay upright, even in her most sensible shoes.

Wacky Foreign take: Our supposedly honest and decent candidates are nothing more than a pair of sinisterly grinning thuggish boxers, raining terribly kidney punches down on poor, innocent Mexico. But watch out, fellas! Hispanic voters are coming to avenge their father, and they're thirty feet tall and blond for some reason. They will crush you with a single swipe of their mighty sombrero!

Wacky Foreign take: The Dutch like big asses. That's what I'm getting out of this, anyway. Enterprising pornographers should secure the hillarysbigass.nl domain post-haste!

Tune in for next week's Cartoon Violence, in which we examine American political cartoonists' views on foreign elections! Ha ha, just kidding, nobody here knows about any of that crap.