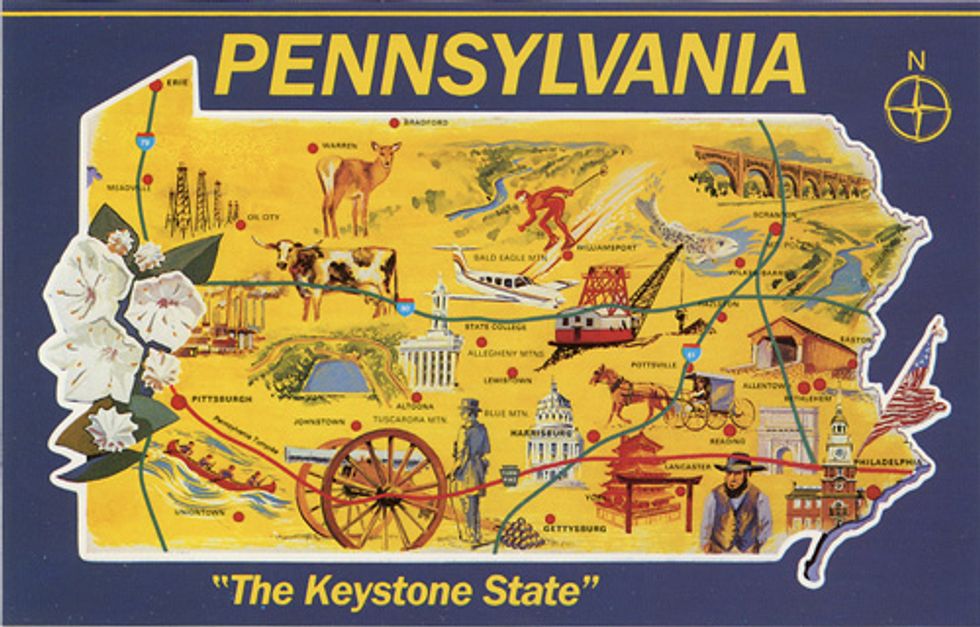 Last week, the Pennsylvania Supreme Court held that massively partisan districts violated the state's constitution. It ordered Republicans to stop stealing seats and redraw the map NOW, before the 2018 electoral cycle. And the Court brought in a noted expert to help them draw up fair maps if the Republicans in the lege couldn't agree with Tom Wolfe, the Democratic governor.

Because this issue involves Pennsylvania law, it should not be appealable in federal court. But you know Republicans filed an immediate appeal to SCOTUS anyway! They stole those seats fair and square, and they're not giving 'em up without a fight.

Today Michael Turzai, Speaker of the Pennsylvania House of Representatives, joined by Pennsylvania's Republican congressmen, filed an amicus brief in the appeal. These fine, upstanding politicians only ask Justice Alito, who is responsible for the Third Circuit, to pleaseohplease tell that mean Pennsylvania Supreme Court to let them steal one more election. It's looking like a Democratic wave year, and if the Court could just let them pad their margins in Congress and the Pennsylvania House and Senate by like 10 percent, well, you know ...

We are hard pressed to see Alito getting both Roberts and Kennedy to side with him, Gorsuch, and Thomas to overrule state law. But the devil's buying souls at a hefty clip these days, so who knows???

There's so much chutzpah in this complaint, so let's just hit the top five reasons lightning should only strike these people for having NO SHAME:

This last one requires just a little bit of explanation. See, Republican Congressman Tim Murphy had to resign after sexing up a lady that was not his wife, then telling her to have an abortion. This is very NOT ALLOWED when you are a Bigwig in the Godbotherers Caucus. Pennsylvania's Court ruled that the special election in March for the rest of the Horndog Hypocrite's term should proceed as planned, and November's elections will proceed with new maps. Forgive the long quote, but here's the PA GOP spinning a yarn about the typical rube in the Pittsburgh suburbs, so confused by his choices that he's practically disenfranchised.

On March 3, ten days before the special election, he retrieves a flyer from his mailbox urging him to vote for one of the candidates in the forthcoming special election. As he is walking back to his house, he is stopped by a volunteer, who, eager to collect as many signatures as possible before the March 6 deadline, asks him to sign the nominating petition for one of the candidates in the 12th congressional district. The practical reality is that most voters who find themselves in such a situation will never receive an adequate explanation of what has precisely occurred and, as such, are likely to either not vote, or assume that they are not eligible to vote or otherwise participate in one or both of the elections. Such a state of voter confusion should not be countenanced.

Oh, noes! There might be a confused voter in the 18th District. SCOTUS better let them steal another cycle statewide! Can't be too careful, right?

BUT WAIT, THERE'S MORE! Guess who else wants in on this bullshit!

If you guessed the Secretaries of State from Alabama, Arkansas, Arizona, Kansas, Missouri, and South Carolina, then you are today's BIG WINNER. Yes, those small government conservatives have thoughts on how Pennsylvania should run its own elections. But they're thinking BIG. They want SCOTUS to order Pennsylvania to keep those gerrymandered districts for two more cycles. See, the maps will all be redrawn after the 2020 Census anyway, so it's only right that Pennsylvania should be forced to run 2018 and 2020 with the unconstitutional districts. They can draw fair maps after the next Census -- "Put simply, there is no need to hurry."

WE SHIT YOU NOT! THIS IS THEIR ACTUAL ARGUMENT. WE ARE DEAD NOW.

But we will come back to life briefly to remind you that Democrats are a lot less likely to piss on your leg and tell you it's raining. Here's the amicus brief on the Maryland case, where the state is gerrymandered to favor Democrats. The brief is signed by lots of Democrats, because gerrymandering is WRONG and ANTI-DEMOCRATIC. And even if it meant we'd have to give that swamp cracker Roscoe Bartlett back his seat in Congress, the country would still be better off with fair districts.

Okay, back to whatever fresh Trumpian horror this news cycle brings. Yinz can duke it out in the comments over Sheetz versus Wawa! Just don't be a jagoff!

Please money us! Our Soros checks are late this month!