The New York Times Hired A Climate Denier, And It Just Went Great 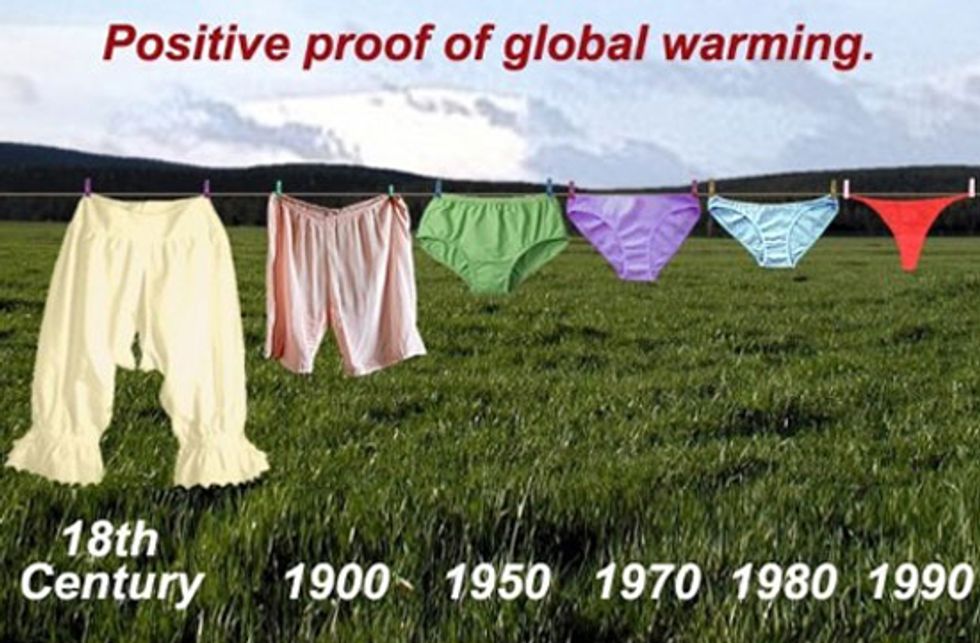 Among climate change deniers, these are usually in a twist.

So the New York Times has, with some fanfare and more than a few cancelled subscriptions, hired a new columnist, Bret Stephens, to tell us we shouldn't be so all-fired certain about climate change, because Hillary Clinton's pollsters were really certain she had the election locked up, and see where that got her. No, really, that takes up about the first third of the column: Hillary was so sure the numbers were going her way that she didn't listen to warnings about how much support Trump had, so a little strategic doubt is a good idea.

Which is probably pretty good advice if you're running a political campaign, where the data are based upon the vagaries of public opinion polling, an attempt to bring statistical modeling to people's political preferences. No matter how pleased Stephens is with his comparison, it's actually a pretty crappy way to think about earth sciences, considering that air and water temperatures, or the amount of sunlight being reflected back into space by steadily-diminishing polar ice, simply aren't going to be influenced by the discovery of a decade-old Access Hollywood tape or an announcement from James Comey. Ah, but Stephens isn't only interested in how certain scientists are about climate change -- he wants the public to be less certain that the scientific consensus on climate is all that reliable, because doubt is a fine reason not to change anything.

It's the same "let's take it a little slower" argument that was pushed by tobacco companies, makers of ozone-depleting chemicals, and utilities whose smokestacks were causing acid rain: We shouldn't do anything drastic -- or indeed, anything at all -- until the data are more certain. This is especially convenient for those who want to do nothing at all, since science is all about degrees of certainty, and the likelihood that new data will refine our understanding of any phenomenon. (This is where we remind you to go read Merchants of Doubt, the book where we meet the nice folks who've brought their "let's not act too hastily" refrain to all the above issues. Yes, it's often the same hired guns over and over.)

As Susan Matthews, Slate's science editor, points out in a lovely takedown of Stephens's blatherskite, his method is especially insidious, since he doesn't present any demonstrable lies about climate change -- no shadowy cabals of socialists who are out to run everyone's life by taking away their freedom to buy the biggest truck they want, no jabs at Al Gore's weight or his hypocrisy for not living in a cave. But the overall point of the column is classic denial: Yes, the science seems pretty clear. But can we be sure?????

Stephens does not call a single fact into question throughout his piece. Instead, he’s telling his readers that their decision not to trust the entire institution of science that supports the theory of climate change might actually be reasonable. “Ordinary citizens also have a right to be skeptical of an overweening scientism,” he writes. “They know—as all environmentalists should—that history is littered with the human wreckage of scientific errors married to political power.” Trust nothing, he urges, for nothing deserves trust.

It's also a classic example of a false appeal to hear "both sides," even though all the real data is on one side, as it was with tobacco, acid rain, and ozone depletion. (Funny, 30 years after an international treaty banned chemicals scientists said were causing it, the "ozone hole" over the South Pole is closing -- even though scientists were merely highly certain, not 100% certain.) Predictably enough, when a fair number of readers cancelled their subscriptions, a Newsweek opinion piece decried "what some see as growing rigidity of thought among American liberals," who wouldn't even give the nice climate denier a fair hearing. Liberals are so intolerant! Or maybe they're disgusted to see the Times reacting to Clinton's loss in 2016 by hiring a columnist who insists electoral outcomes are as uncertain as climate models. But Stephens isn't dealing in good faith, as his closing line gives away:

Deleted Comments: If Gravity Is Real, Why Can We Jump, Smart Guy?

Time may not be a flat circle, but Earth definitely is. Or maybe a triangle.

Why, yes. If only we'd listen to the people who are lying about climate science, perhaps we could bring in more people who already don't accept the science. That would make for a much more "reasoned" conversation. (We also feel all kinds of bad for mocking Flat-Earthers, too. Shouldn't we hear them out instead of being so arrogant about the the Spherical-Earth hypothesis?) Or as Matthews summarizes Stephens's argument:

The only way to be reasonable about this topic is to give in to those who are unreasonable about it. While he calmly insists he is the only logical person around, he is spewing complete bullshit.

Thing is, while science is never settled on anything -- that's how science works -- it really is settled on plenty of broad outlines. Evolution is real. Black holes exist. Carbon dioxide and other greenhouse gases from human activity are trapping more heat in the atmosphere than is radiated off into space, and the seas and air are warming. As Matthews puts it, "The questions are no longer whether and how but how soon and how bad." And those are the questions that we need to look at in order to limit and adapt to -- not prevent; we're way past that point -- the harm we've done to the planet.

For one thing, not wasting fossil fuels on having a paper copy of the New York Times delivered to your home would be a small but useful step.

Yr Wonkette is supported by reader contributions. Please keep a cool head and click the "Donate" linky below -- and consider helping out renewable power AND Wonkette by greening up your home energy bill with our partners at Arcadia Power.