The Obama Dystopia: Kids Complain About School Lunch For First Time Ever 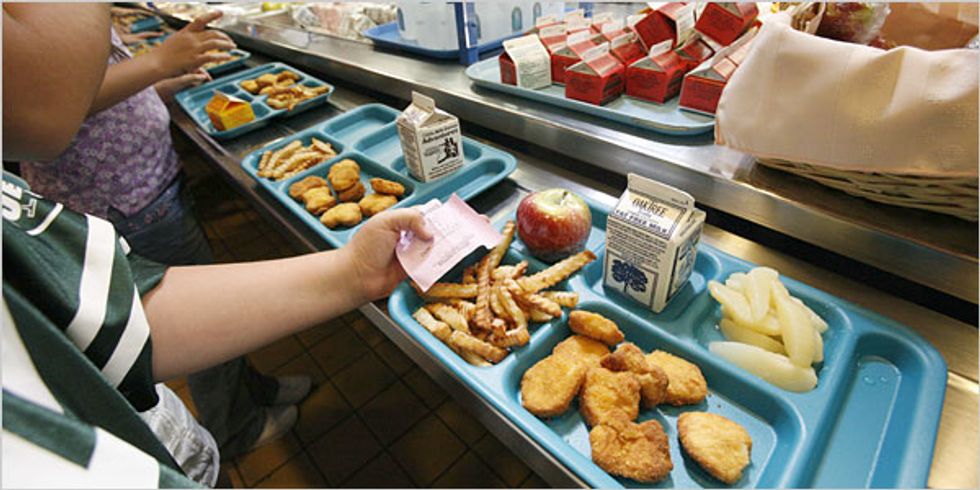 The Daily Caller (excuse me, the DAILY CALLER NEWS FOUNDATION wtf) has an exclusive breaking expose: high schoolers are whiny about things.

Children and parents across the country are fed up with the restrictive new school meal regulations implemented by the Department of Agriculture under the “Healthy, Hunger-Free Kids Act of 2010,” which has long been touted by first lady Michelle Obama.

“This year, we’ll be hungry by 2:00,” one student, Zach Eck, told KAKETV in Kansas. “We would eat our pencils at school if they had nutritional value.”

Um, child, of course you would tell KAKETV you want more food, it's a TV station made of kake. I would tell BEERTV I want to get schwasted after work (during work), too. But let's look at what these kids are doing to "protest," courtesy of KAKETV's new show, What Shit Do You Shove In Your Face?

Students at a local school are staging a lunch protest by bringing their own food. After a small beginning, the effort has snowballed into about half of the entire school. The students are 'brown-bagging' it in protest against new national school lunch guidelines.

Hahahaha, no, really, what? Kids don't like school lunch...so they bring their own lunch? That's how school lunch works and has always worked. I mean, for fuck's sake, people. #OccupyBrownBags

The new lunch standards have led to the removal of some old food favorites, including a particularly popular item at one school in upstate New York: chicken nuggets.

“Now they’re kind of forcing all the students to get the vegetables and fruit with their lunch, and they took out chicken nuggets this year, which I’m not too happy about,” Chris Cimino, a senior at Mohonasen High School in upstate New York, told the Associated Press, which gave the rules a “mixed grade."

BREAKING: kids discover they really like chicken nuggets; cannot always have them. Everyone loves chicken nuggets! Put a plate of chicken nuggets in front of a room full of vegans, and when you come back in, at least two will be gone. They're irresistible. (It helps if you leave the vegans in there for at least a couple of days, though.) When I have a child, I fully expect his or her first sentence to be, "I would like some chicken nuggets, daddy." My fat, heavy-breathing child will be goddamn polite.

So, the main problem these precious flowers have is that the lunches are too small (the lunches have calorie caps, which top out at 850 calories for high schoolers; that equals about 18 Chicken McNuggets, or a double Quarter Pounder with cheese plus some fries). When Your Wonkette writer was in high school, lunch often consisted of a bacon cheeseburger and curly fries dipped in nacho cheese, and we still complained that was too small. The problem is likely not that school lunches are too small; it is that teenagers nowadays, like teenagers in every day that's ever existed, are greedy, whiny little fuckers who we love dearly both because they are the future of the race and because they're gonna be eighteen soon and totally legal.