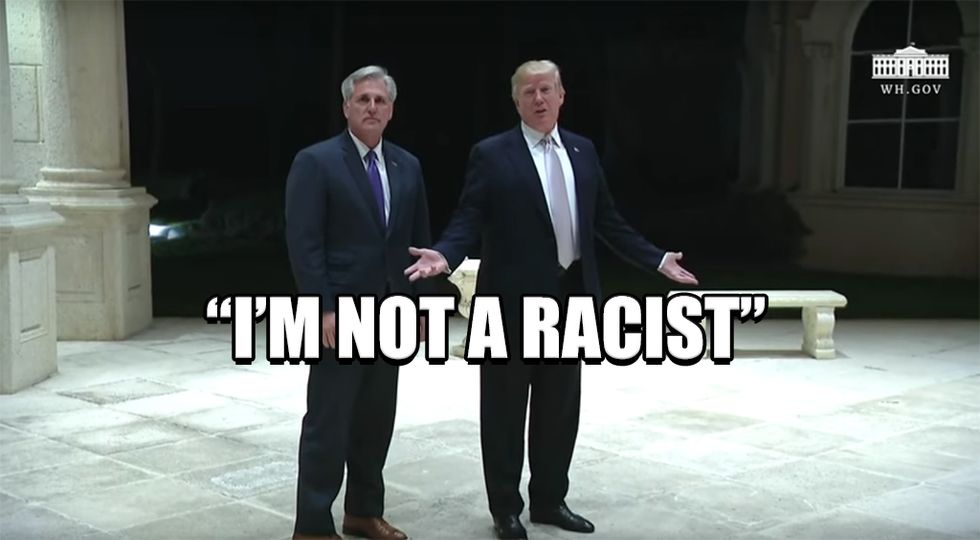 The fallout over Shithole-gate continued this weekend as Republicans dodged questions and bullshitted their way through excuses, while others simply broke out in stress-induced hives when they flat-out lied on national teevee.

News outlets in Not America are having a tough time translating "shithole" into un-Americanese. My favorite is, "The place wolves like to fuck."

In an attempt to blame Democrats for the collapse of a deal on DACA, Trump says he's, like, the "least racist person," except for all those times he's said and done racist or all the racism.

Corey Lewandowski will scuttle down to DC to dodge Trump-Russia questions on Wednesday or Thursday.

The Senate is expected to focus on DACA and ignore Darrell Issa's totally not racist bill aimed at stopping Indian people from stealing jobs from tech bros in Silicon Valley.

The Trump administration has a so-called "evil genius" plot to to kill any progressive reforms with CRAs in the event a Democratic tide rolls through Washington in 2018 or 2020.

With the government funding deadline looming (again), Republicans are already attempting to blame Democrats for any possible government shutdown if they can't kick the can down the road (AGAIN).

As the number of retiring Republicans continues to creep up, odds favoring Democrats are growing, with their candidates ranging from Navy SEALS to science geeks.

The current deputy chief of staff for the Office of National Drug Control Policy is a 24-year-old campaign staffer with multiple sketchy résumés since all the olds who know what they're doing keep quitting.

Trey Gowdy suddenly resigned as chairman of the House Ethics Committee over the weekend. In a statement, Gowdy cited the "challenging workload" he had trying to cut and paste Trump's Russian emails into Hillary Clinton's inbox.

John Freely, the US ambassador to Panama, suddenly "You're Fired" himself on Friday in the wake of shithole-gate, and now the depressed State Department might as well start placing bets on who will quit next.

The FCC has opened an investigation into how in hell someone triggered the doomsday button in Hawaii over the weekend.

The US military is blowing the dust off plans to invade North Korea in the event Trump isn't golfing the next time someone accidentally presses the wrong button. It should be noted that Trump is not preparing for a "big-ass fight."

Here's a good trip into the Wayback Machine about the time Trump's sleazy mentor, Roy Cohn, sued MLK for libel just to be a dick.

After the invaluable ProPublica reported that cops in Jacksonville, Florida, have been issuing hundreds of bogus pedestrian tickets to black people, the sheriff got VERY butthurt and sent a nastygram, and now the reporters are doubling down on their investigation.

Former Virginia Gov. Terry McAuliffe left a welcome home present for Gov. Ralph Northam in the form of pillows with his (McAuliffe's) face, embroidered with the words, "Sleep when you're Dead," continuing a tradition of obnoxious pranks Virginia's outgoing governors play on their successors.

For struggling Not American shithole countries, the fastest way off Trump's shit-list seems to be making it easier to access Trump properties so that Trump can launder make money, according to reports from multiple ethics watchdogs.

During an annual press conference this morning Russian foreign minister Sergei Lavrov said mean things about the United States, criticizing the Trump administration's rhetoric on the Iranian nuclear deal. Lavrov then waved around a VHS tape and flashed a cheshire grin.

Iranian protests may have begun to subside, but anti-government sentiments have continued after the suicides of several detained protesters were reported.

Preparations are underway for the 2018 NATO talks, but a new report out of Serbia alleges a paramilitary force run by gangsters has been attempting to derail Serbia's entrance into NATO with an assist from Russian spies and diplomats who are trying to destabilize former Soviet states.

And here's your morning Nice Time! Tilly the river otter!

We're 100% reader supported, like public radio but without the sleepy crap.