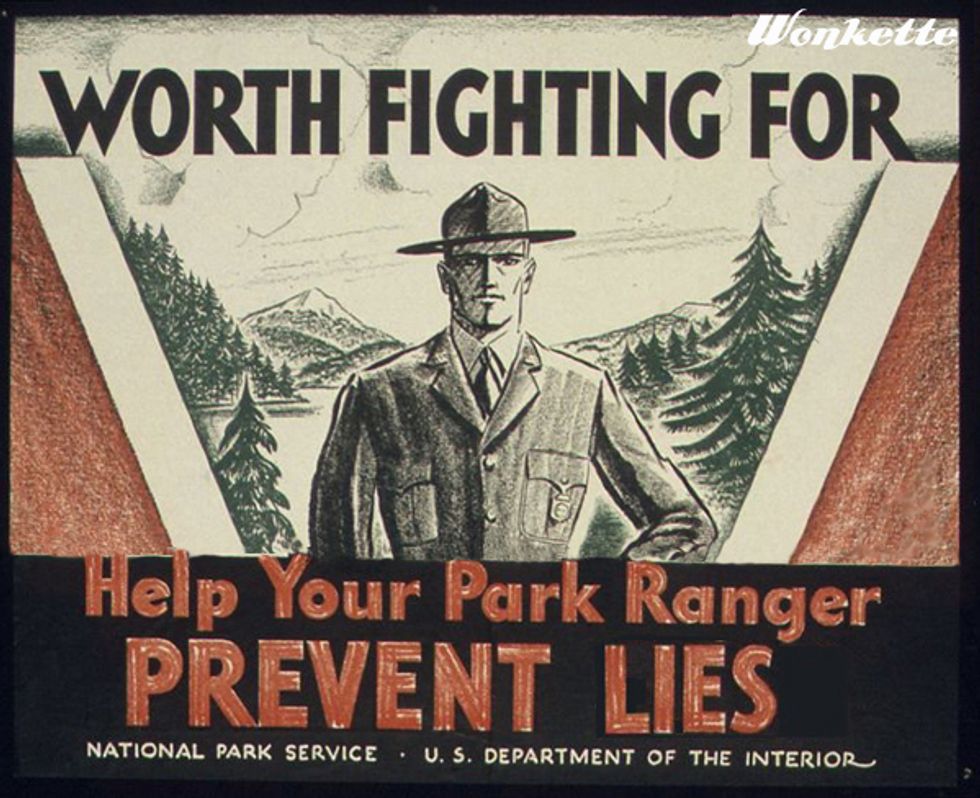 Tuesday, we told you about what looked like sudden gag orders being imposed on multiple government agencies. Workers at EPA, USDA, HHS, and others were advised not to communicate with any outsiders -- not the public, not even Congress. And then there were small signs of resistance, like someone at Badlands National Park tweeting out facts on climate change -- which were then deep-sixed a few hours later. But not before they were screenshotted and posted in reply to Tweets all across the National Park Service.

You know what happens when you piss off people who love both their jobs and the environment? You get resistance. By Tuesday afternoon, a rogue "AltUSNatParkService" Twitter account had been started by NPS employees, outside the official NPS Twitter channel. The rogue Tweeters made it very clear it was Park Service workers posting on their own time, and therefore not breaking any rules, so there. The channel description:

A sampling of their Tweets:

In addition, the account has been tweeting climate data, proof of climate change, statements by scientific organizations, and even a "shoutout to the anonymous crews at @BadIandsNPS continuing the great work of the original before Trump's (tiny) hand came down." Free of the constraints of a government account, they got a little uppity, urging people to call their representatives to demand the gag orders be lifted and directing readers to the NPS website on climate change and how the Parks Service will work to preserve cultural resources, with the warning "Pls download before it is removed."

In the meantime, some official NPS sites are still taking risks. Yesterday, Death Valley National Park Tweeted some completely appropriate work-related information about another part of the Park Service: Manzanar National Historic Site, where Japanese-Americans were interned during World War II. Just a little something that happened to coincide with the day Donald Trump was expected to announce the current version of his ban on Muslim entry to the USA, although his actual immigration orders Wednesday stopped short of that. Some of those internees were also imprisoned in Death Valley following a riot at Manzanar. And they included a photo, quote, and information about Togo Tanaka, who argued for civil rights of detainees. Can't say they were posting anything unrelated to the park's mission.

Hey Mr. Trump: Is A Muslim War Hero's Father American Enough For You?

If This Hillary Clinton Ad Doesn't Make You Cry, You Are Dead Inside

Look, if it happens to make some people think of a Muslim American soldier who died saving his comrades in Iraq, and whose father asked, "Is my son American enough for you, Mr. Trump?" that's their own lookout. History may not repeat itself, but as Mark Twain didn't say, sometimes it rhymes. Ah, but are all these renegade Park Rangers acting on their own? Or is there some other force at work?

Oh, and it's not only the Park Service. There's an altNASA twitter, too:

The Washington Post has set up a running list of all the possible subtweets of President coming from government accounts. It's pretty impressive. If you liked the Death Valley posts about Togo Tanaka, take a gander at what the Department of Defense Tweeted Wednesday:

The link is to a USMC blog entry profiling Cpl. Ali J. Mohammed, who came to the US as a refugee from Iraq -- and has gone back to Iraq as Marine to help support the Iraqi Army's effort to push ISIS out of Mosul. Again, probably just a coincidence.

Let us close with one observer's wish that some other government employees would show a little spine, too:

OK, Brandon, now let's not get carried away. The internet is nice, but it can't work miracles.