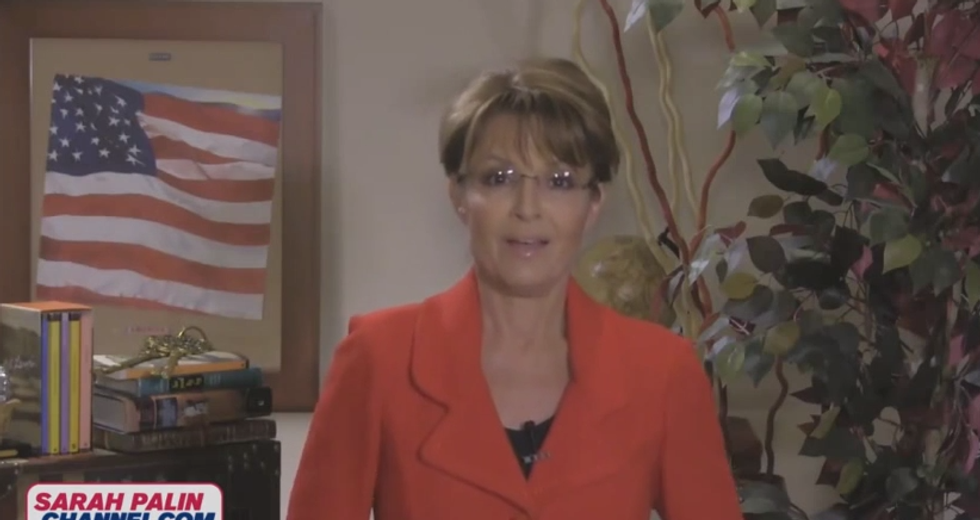 A man gave us money to buy a subscription to the Sarah Palin Channel. That man was Fartknocker.

This week, on the Sarah Palin Fartknocker Report, Presented to You by Fartknocker, Sarah Palin travels back in time to a month ago, when Elizabeth Warren gave a big LIEBERAL word-word-word to Netroots Nation. The gays and commies at Netroots, they liked it! Sarah Palin, she did not like it so much. Let's listen!

This little clippy-clip, brought to us by Bob Cesca at Daily Banter, is all we have for you this week because Dan ran off with the Sarah Palin Channel login credentials (JUST $100 PER YEAR!) and hasn't been seen since. We are sure you are sad to only get 47 seconds of Sarah Palin's legendary wit and trenchant analysis, but you will just have to bear it.

We believe ... wait, I thought fast food joints ... wait, don't you guys think they're like, of the devil or somethin'? Liberals, you wanna send those evil employees who would dare work at a fast food joint that you just don't believe in, I thought you wanted to send em to ... purgatory or somethin', till they all go vegan. [Pause for laughter.] ... and wages and picket lines they're not discussed in purgatory, are they? Why are you even worried about fast food wages. Well, we believe an America, minimum wage jobs, they're not lifetime gigs! They're stepping stones!

We shall not bang our heads against any rocks trying to point out that "an America" actually does have minimum wage jobs that are lifetime gigs, mostly for women who are heads of household. That Sister Sarah does not "believe" it does not make it any less true.

The rest of her point, of course, stands: liberals hate fast food employees for not being vegan, and we wish them to perdition* with their little children, who also aren't vegan and probably don't even vote. Man, that chick's really got our number. Also, she might want to invest some of her grift into some lights. That set looks like shit yo :(

*We believe Sarah Palin might have sidetracked herself when she realized if she said "hell" half her base would have torn their hair out and beaten their breasts because "hell" is a bad word that you do not say to old ladies in Jackson, Miss, so she got caught on "purgatory" instead. Nobody ever wishes anyone to purgatory, that's just fuckin' dumb. But perdition is a place you might wish someone to, if you are in the 19th century -- which, as Cesca points out, in one of her other points of rebuttal to Warren, Palin wishes to get government out of pay issues between employer and employee completely, so the 19th century is probably where the Polar Brain Vortex belongs.