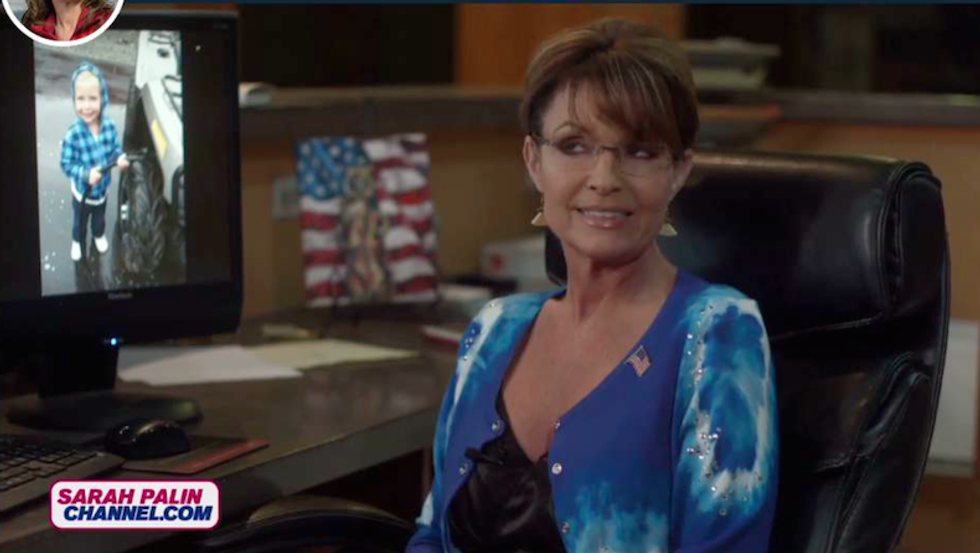 FDR's speechwriters are spinning in their graves after Sarah Palin's most recent Ask Me Anything. Come along, Wonketeers, we'll explain in the car.

First, the numbers: Palin published just under six minutes of video content in the last week, which means she's back to running the laziest grift in American politics. More than half of this week's content centers on one question from "John," who writes in to Ask Sarah Anything. (Incidentally, Palin's Ask Me Anything segments now have a new acoustic intro; it sounds more like Prairie Home Companion's interludes, only somehow more self-righteous, if that's even possible.) Here is John's question, with all punctuation and capitalization sic'd from the original.

"There was a 'gift' in the Cromnibus Bill for the 'too big to fail' banks that puts the taxpayer on the hook for their speculation in derivatives. Given the pain, harm and loss that Americans suffered from the last financial collapse, made worse by the policies of Mr. Obama and his allies in Congress, and as this proposal greatly increases the likelihood of another financial collapse with even more devastating consequences, will the members of the Senate forego the blandishments and largesse of the financial sector and stand up for 'the Forgotten Man,' or will they forsake their duty as public servants? What are your thoughts?"

"John" is referring to a Citigroup-written amendment to the cromnibus, which you progressive scum probably heard about from Professor E. Schoolmarm Dubbywubs. Students of rhetoric and people who can use Google will recognize "the Forgotten Man" — again, quotes and caps in the original — as the centerpiece of a radio address by the original Big Government Bolshevik, Franklin Delano Roosevelt. Here's the relevant portion of FDR's speech:

It is said that Napoleon lost the battle of Waterloo because he forgot his infantry — he staked too much upon the more spectacular but less substantial cavalry. The present administration in Washington provides a close parallel. It has either forgotten or it does not want to remember the infantry of our economic army.

These unhappy times call for the building of plans that rest upon the forgotten, the unorganized but the indispensable units of economic power for plans like those of 1917 that build from the bottom up and not from the top down, that put their faith once more in the forgotten man at the bottom of the economic pyramid.

Fun historical fact! FDR reappropriated the phrase "Forgotten Man" from a Gilded Age disciple of the free market named William Graham Sumner — and horror of horrors, Sumner was was a Yalie to boot! It's a term loaded with history, history of which Sarah Palin seems to be blissfully unaware.

But what's the Forgotten Man doing here, on the Sarah Palin Channel? We're guessing it has something to do with Amity Shlaes' The Forgotten Man, the 2007 revisionist history of the Great Depression that attempted to reappropriate a term that had already been reappropriated once before. (Under Yankee swap rules, "Forgotten Man" can only be reappropriated one more time, and then it's down for keeps.) Yr Wonket thinks that's the most likely explanation, but there's another possibility we can't rule out: Is "John" a progressive mole?

Sorry to go all Sarah Koenig on you, but hear us out. John is asking a question that forces Palin to choose between the pitchfork-wielding populism of her base and the Austrian-school paternalism of her heart. If John's some kind of progressive troll, we're impressed by his subtlety.

On the other hand, FDR's pre-Fireside Chats aren't exactly passed around by the kids on their Snapchats or their FaceTweets or their oh Christ, we don't even know what you little shits use anymore, we give up. It's not inconceivable that a man young enough to remember a radio speech from 1932 is now old enough to buy gold on TV, wire money to Nigerian princes, and subscribe to the Sarah Palin Channel.

So what's going on here? Is John a mole? Is he a confused old man, pecking with stiff index fingers at the laptop his granddaughters gave him last Christmas? Is Sarah Palin actually going to find herself on the same side of an issue as Elizabeth Warren and FDR? And what about the Nisha call?

Watch the Tundra Grifter thread the needle between between two economically divergent constituencies — call it splitting Saloman Brothers' baby, if puns are your thing.

It's like we the taxpayers are funding Wall St.'s vacation to Vegas. [...] Wall St. has figured out a way to privatize their rewards but socialize their losses. That's just a nice little trick!

Keep in mind that Wall St.'s reckless behavior is what led to the financial collapse in 2008. So, John, thank you for asking the question. I agree with you that the little guy, the Forgotten Man, we've once again been ignored by our politicians.

Masterful. This is Sarah Palin's version of Aux armes, citoyens — a Know-Nothing populism steeped in correspondence-school economics courses with a side of moose chili. She shames high finance without calling for either regulation or redistribution. She makes it look so effortless sometimes.

Palin has no clue what "the Forgotten Man" refers to. Her ignorance of Depression-era rhetoric prevents her from wondering whether she's walking into a trap, but she knows enough to stay away from mentioning that Republicans largely supported the cromnibus, or that Sen. Lindsey Graham (R-Loves the summers in Provincetown) took to the Senate floor to tell his colleagues to ignore Warren's warnings and vote for the bill. She repeats her fan's complaints back to him, she lives to fight another day, and she irks Yr Wonket to no end. Well done, Governor Quitterface, well done.

For what it's worth, our money is on John being very old and also having read Amity Shlaes. To our ears, the phrase "forego the blandishments and largesse of the financial sector" is written by a man of a certain age who wants you to know that he reads books, goddammit, serious and important books.

On a final note, did you even see the bedazzled nightmare Palin was wearing in that video?