The Sarah Palin Fartknocker Report: The Greatest Gift Of All 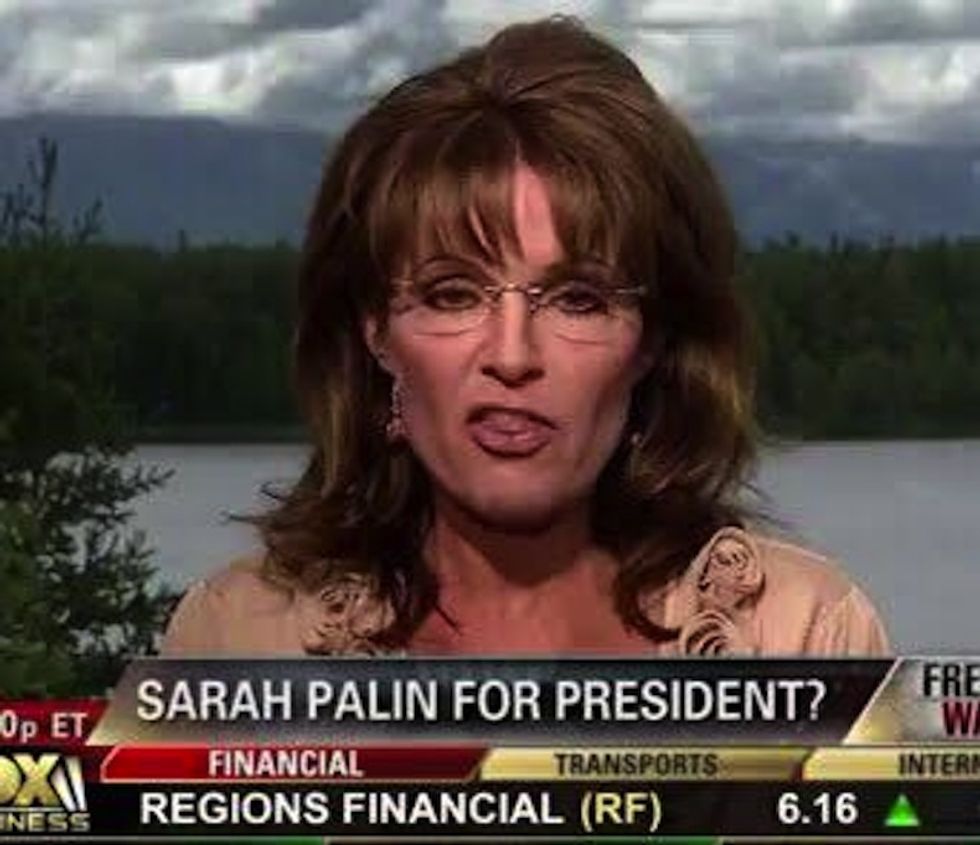 This week, Sarah Palin pumped out a lot of Christmas-themed content, showing us that it is truly better to give than to receive, so long as you're giving to the Sarah Palin Channel. On closer inspection, all her Christmas videos are from the same filming session, thus further proving our theory that the Sarah Palin Channel is the most ruthlessly efficient grift going.

Also, someone Grinched the Sarah Palin Channel! When you try to watch "Keeping Christ in Christmas" — and why would you need to watch anything else? — this is all you see.

[contextly_sidebar id="OhtImapZxtCXyVHODHnnu2nLAhtWUusY"]Yr Wonket thinks this might have something to do with Palin's video the day before, "Good Tidings and Great Joy," in which she flogs her 2013 book of the same title and tells us that we should all keep Christ in Christmas, even if we aren't necessarily Christians. Not that that should be held against us!

What we believe in is freedom of expressing our faith and what our beliefs are, not allowing just a few angry atheists with attorneys perhaps to tell us that we can't celebrate the birth of Christ the way that we would like to. And it's not an in-your-face political lecture, it's a fun book that incorporates the solution to the challenge that is a war on Christmas that we see taking place right now. [...]

...we have recipes in there, and we have just a lot of fun things that hopefully will spark some inspiration in other people to allow them, no matter what faith anyone is, but allow them some Christmas joy to spread...

[contextly_sidebar id="FgNJZDSvW12IHWcmTT2yvd1uNRwaDwqE"]To recap: this book is not an "in-your-face political lecture," but there is a War on Christmas, and also too, that shouldn't stop non-Christians from keepin' Christ in Christmas. Not sure how this goes over with Palin's Jewish fans, but hey, if you want to hear her brag about her moose chili, she does that later in the same video. We don't even know anymore, you guys, we really don't.

Let's move on to Sarah Palin's Christmas card list, and what is quite possibly the shortest video we've seen her post so far. It's only 29 seconds long, but great resentment comes in small packages.

Yes, John McCain does get a Christmas card, and he gets a note of appreciation for recognizing that there was someone way up in the Last Frontier who had a desire to serve this country. I still appreciate John McCain for that, and I thank him for that. Yeah, John McCain's on my Christmas card list, heck yeah.

And that's the entire video! A+, Sarah, and sorry for all the dental work you'll need after grinding your teeth so hard.

Finally, we'll take a gander at how Sarah and the First Dude handle gift-giving over the holidays. We are sure that their arrangement works for them and their marriage, but watching this video, we felt a little sad for Governor Quitterface.

Todd is the easiest person to please when it comes to gifts. All he ever wants, all he ever asks for, and he grins every time he receives it, is a gas card. He just wants to top off his truck or his floatplane or his snow machine, that's, and it's fine with me, man, I'll go spend $50 on a gas card and wrap it up with a bow, and that makes him happy.

As for me, Todd is very unique in his gift-giving. I've received a beautiful red manual ice auger to drill my own holes in the lake for ice fishing.

And then she talks about the other gifts Todd has given her, like a pair of hockey skates because apparently she's "all talk when it comes to hockey," and Todd thought she should get a taste of how hard the game is before she does anything so uncouth as cheer loudly from the stands.

Yeah. Look, we've been mean to Sarah Palin this year, we really have, and while we're not sorry about it, we do wish her and the rest of her family a Merry Christmas and, ugh, fine, we guess a happy new year. Now if you'll excuse us, we are now going to go buy our girlfriend a manual ice auger. We will let you know how that works out for us.