The Snake Oil Bulletin: And Now For Some Olden Timey Bullcrap! 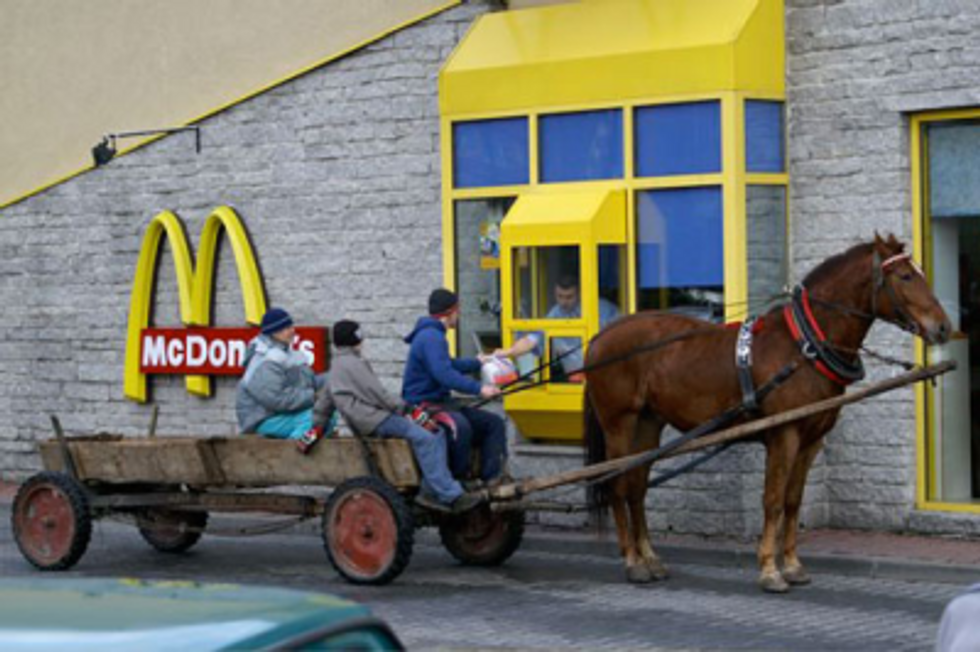 Greetings and salutations, friends! It's time once again for your favoritest little traveling stage show, the Snake Oil Bulletin! We've got a jam-packed agenda this go around, so let's dive right into the muck by harking back to a simpler time and a simpler life. An age when education stopped at age 10 like the good Lord intended, and pernicious night air stole the breath right out of our baby's mouths. If you think we're talking about the olden days, you'd be surprised. Let's check in again with our old-fashioned friends, the anti-vaxxers.

First on today's bulletin we have a blast from the past, in that these people literally want us to return to the past. And no, we're not talking about the Amish; we're talking about the fine people who get excited about the idea of bringing back measles and whooping cough: the anti-vaxxers!

These proud child-abusing loons have certainly been having a stellar year. Between impotently protesting in California, and impotently protesting in Australia, these brave souls won't stop until they've spread their special brand of child-killing incompetence all over the world. But if you could only understand them, dear reader. They do not wish to harm children. No no. They simply wish to return us to a simpler time; a time when mommies mommied the measles out of their babies with chicken soup and a kind smile; a time when medicine was untainted by the pernicious forces of "the scientific method"; a time when electricity was the devil's nectar and the rhythm method was considered an abortion. It seems that our anti-vaxxers really really love the past, and in the worst ways.

For years now the anti-vaxxer crowd has been head over heels in love with the Amish, those friendly, silly German people with their cute bonnets and fuzzy beards, so ubiquitous along the highways of our nation's Pennsylvanias and Ohios. The anti-vaxxer crowd has somehow gotten it into their heads that the Amish do not vaccinate, what with their morals being so sound and their lives being so pure -- it's why the wee Amish childrens party it up and get high as HELLLL on flu shots every time they go on rumspringa. And since they're so blissfully vaccine-free, these anti-vaxxers imagine, the Amish remain naturally untouched by such modern afflictions as the Autizms. You can find examples of such delightful Amish puffery in acticles like this'un, submitted to Yr Volpe by a person whose friendship we now question. Let's Wonksplore this idiocy, shall we? How does this bullshit begin?

People outside the alternative health community are often confused by the lack of autism in the Amish people.

Nope. Done. We've reached critical derpacity right in the first sentence. Nothing about that sentence is remotely true: not the confusion, not the lack of autism, not even the word "the." All bullshit. We're already off to a great start!

Their diet consists of eating organic, fresh, locally-grown produce, and of course, they do not follow the established vaccination routines. To the dismay of the mainstream media and the medical establishment, this has resulted in a healthier people, who are void of all of our chronic diseases.

If you don't count rampant genetic diseases, of course. Who wouldn't want to live in a community at high risk for something called "Maple syrup urine disease"? It sounds delicious! And then there's their high genetic propensity for Crigler-Najjar Syndrome (so exotic) in which a viscous substance called bilirubin coagulates in children's spleens before settling in their eyeballs and skin. Jaundice is so retro chic.

There have been 3 (yes three) verified cases of autism in the Amish, and two of those children were vaccinated. No information is available for the third child, who was likely vaccinated himself.

Um...did you not just say that the Amish don't vaccinate? Two out of three of these sample kids were vaccinated, and now you're speculating that even the third was too. Consistency, how the fuck does it work?

Also, yeah, no. That "only three kids with autism" number comes exclusively from a quack reporter named Dan Olmsted who conducted a single super duper scientific not-study in 2005 in which he only checked out one Amish community in one county in Lancaster, PA. He obtained that number by getting word-of-mouth info from a few informants, and took them at their word that it was true. Science! Of course, that's only assuming that his story of traveling to the community was true, which apparently many Amish people doubt -- people like the actual medical doctors at the Amish-run Clinic for Special Children, which treats Amish children demonstrating autistic behavior.

“The idea that the Amish do not vaccinate their children is untrue,” says Dr. Kevin Strauss, MD, a pediatrician at the [Clinic for Special Children]. “We run a weekly vaccination clinic and it’s very busy.” He says Amish vaccinations rates are lower than the general population’s, but younger Amish are more likely to be vaccinated than older generations.

Strauss also sees plenty of Amish children showing symptoms of autism. “Autism isn’t a diagnosis – it’s a description of behavior. We see autistic behaviors along with seizure disorders or mental retardation or a genetic disorder, where the autism is part of a more complicated clinical spectrum.” Fragile X syndrome and Rett Syndrome is also common among the clinic’s patients.

Oh come on, you can't blame Olmsted for getting literally every part of his story wrong! What reporter would ever even think of asking a qualified source for their expert opinion when there are so many lovely axes what need grinding?

But back to our delightful anti-vaxxer quacks:

The strong correlation between vaccinations and autism is becoming undeniable, unless you work for the medical establishment (pharmaceutical company), the government, or the Adveritising [sic] companies called Mainstream Media. Proponents of the status quo actually claim that the Amish must have a super gene that makes them immune to autism.

Man, those Adveritising [sic] companies sure are doing their jobs well. They've infiltrated every medical establishment on the planet and even infiltrated the league of Amish autism doctors! Fiends! Also too, that Amish super gene must be the same one that makes their urine drizzable on pancakes.

Many of the viruses which children are vaccinated against are no longer circulating. However, fear tactics by the media have led frightened parents to vaccinate their children against these viruses anyway.

WE WONDER WHY THOSE VACCINE-PREVENTABLE DISEASES AREN'T CIRCULATING ANYMORE. IT IS SUCH A MYS-TER-Y.

The simple fact of the matter is that the Amish do vaccinate. They vaccinate a lot. Is their vaccination level lower than the general population? Yes, but that has more to do with poor access to healthcare and misinformation from the anti-vaxxers than it does with any moral hang-ups. According to one study, some 85 percent of Amish parents admitted that at least some of their children were vaccinated, but that study was done by the big-money corporate shills at the American Academy of Pediatrics, so what the hell would they know?

So what have we learned, dear children? That the Amish vaccinate, they have Autism just like everyone else, and they're just as prone to nutty science misinformation as the rest of us heathens, leading to terrible effects like a measles outbreak last year because a couple unvaccinated missionaries didn't align their chakras well enough or take enough colloidal silver or whatever. They really are just like us.

Psychics on the lam after scamming nice, dumb family out of $85,000

Our second story comes to us from our delightful neighbor to the north, Canadia! Police in the tiny Canadian fishing village of Edmonton are on the hunt for a group of psychic fraudsters whom they believe have been scamming hundreds of people throughout the city for months, including cheating some poor, gullible schmucks out of $85,000 -- that's 42,500 twoonies, we only mention that because we love saying twoonies.

CTV News reports that the Edmonton police are on the hunt for a group they suspect to be from Southeast Asia in the country on visitor's visas. Donald Trump was right! Mexicans from Asia are coming to take all the money away from rubes in Canada! Let's Make America Great Again but Canada.

According to the press release, the psychics' scam begins by asking the victim to meet them at a rented home. We're not saying that poor housing is an indication of fraud, but it is a bit suspicious when the person from whom you're taking advice on matters financial couldn't foresee that sudden rent hike over at the trailer park. At least it's a step-up from getting a silicone butt injection in a basement in Queens.

Investigators say that requests for money up front to perform healing rituals, or plans requiring thousands of dollars as offerings for prayers and other ceremonies are indicators of fraud.

Police say the suspects also make unrealistic promises to solve personal and financial problems, and claim to be able to rid their clients of black magic and witchcraft.

The fraudsters begin their con by asking for money up front to clear the victim of demons and black magic and blah blah blah, when do we get to the psychic bridges and reincarnated unrequited loves brought back with Rolex time machines? And again, financial advice givers. Rented home. ILLEGAL OPERATION. ABORT ABORT ABORT.

The local press are doing their due diligence in this story by consulting an expert opinion, and by that we mean they consulted a teevee psychic who goes out of her way to emphasize that she isn't like all these big dumb faker psychics. Her brand of psychic-ry is super duper legit, what with talking to ghost relatives of the teevee cameraman and talking shit about all those posers, man. REAL psychics, ya see, won't try to charge you mountains of money. They'll only try to charge you small mountains of money and then ask you to return for several months worth of follow-up rituals to make sure the spirit juju sticks. A+ reporting, CTV.

Police are very politely asking for people to come forward if they've been victims of this scam, even though they're probably embarrassed and don't want to be a bother to anyone. It was only a little bit of money, ya know, and it's not worth making such a big fuss over. We're sorry.