The Snake Oil Bulletin: Donald Trump Has A YOOGE Offer You Can't Refuse 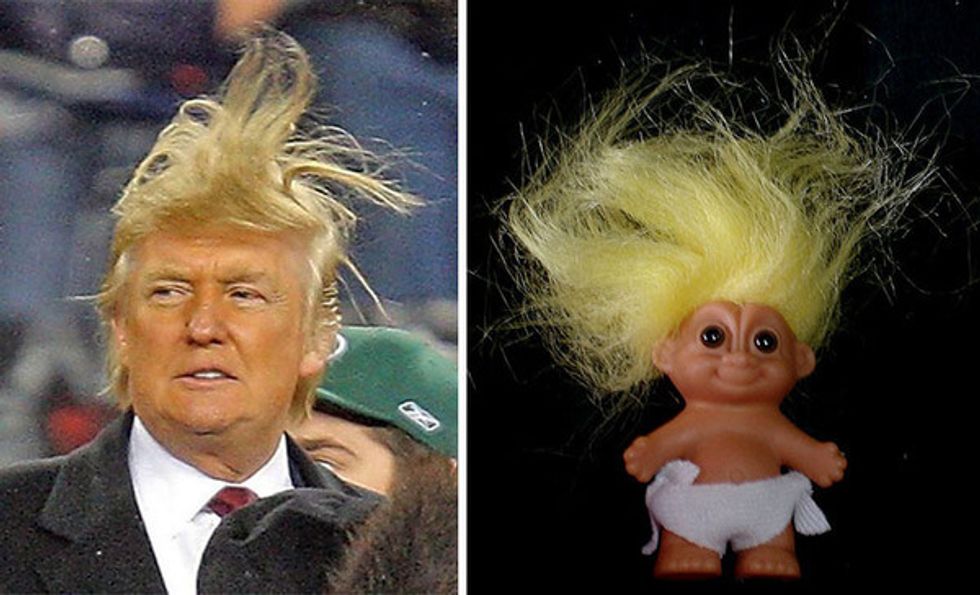 Who wore it better?

Greetings, Compatriots! Welcome again to the Snake Oil Bulletin, your weekly roundup of the latest in hoaxes, pokeses, and Presidential jokeses this side of the Mississippi. We've got a jam-packed agenda to get through today, so let's start with a story about a great American -- no, the GREATEST American -- who ever lived in America, this land of opportunity, in which a small boy born into incredible wealth can gain even more incredible wealth and go on to be the voice of America, for the America, to Make America Great Again. America, YOU'RE FIRED!! But also America.

Do you follow politics, dear reader? For those of you who do read The Politics, you have probably heard of this man, Donald "Yooge Man" Trump, because he has been saying lots of politics things lately about politics, and also maybe lady things? We're not terribly sure. We only read Wonkette for the recipes.

In recent news things, Mr. The Trump has made a point of bragging about how wealthy and successful and wealthy and WINNING he is so all you losers can suck it. However, did you know how Donald made so many of his billions? If you guessed declaring bankruptcy multiple times and then sticking lenders with the bill, you'd only be partially right. But if you guessed that Mr. Trump ran a massive cock-n-bull health scam pyramid scheme in order to rip off victims of the recession, you would also be right! Everyone wins!

Back in '09, Trump bought himself a shiny new company called Ideal Health Inc., then immediately rubbed his taint on it by renaming it The Trump Network. Under the Trump Network, Donald offered his rubes a once in a lifetime opportunity to make UNLIMITED piles of cash:

That’s why I have put my name and expertise into supporting this opportunity. The team at The Trump Network have phenomenal products, provide easy to follow training and have a great support network available to all their members.

The Trump Network offers you a financial solution that you can believe in.

The Trump Network offers products that help make people healthier, an opportunity for you to make as much money as you want, based on your own efforts, and the support of a great company.

Join me in this worthwhile endeavor.

Tell us, Mr. Trump! How can we also, too, make YOOGE piles of money so that the press will also give US a pass to say horrible racist crap?

There is no limit to the amount of rewards you can earn. With The Trump Network, you’re positioned for success. You earn money from the products that the people in your network purchase for personal use as well as ones they sell to their customers. In addition, you have the opportunity to receive $100 to $225 commission for each 1st level FastStart Way purchase. Plus, you can also earn Infinity Bonuses from $10 to $125 for each FastStart Way purchase in your network to unlimited levels.

No limit to the amount of bullshit! Note the weasel words throughout: "You have the opportunity to receive ... commission" should worry you from the get-go.

Can you imagine 10, 100, or even 1,000 people on your team living healthier, fuller lives and duplicating your efforts with The Trump Network? You could be rewarded monthly on their product purchases. This is leveraging your time and your efforts efficiently for long-term residual income. And you can feel even better because you know you are also working to build strong bodies, develop bright minds, and generate free spirits at the same time.

Ugh, we haven't heard this much bunk about reaching new levels since that time we sold L. Ron Hubbard that abandoned box of er, uh, E-meters.

The system sounds easy enough doesn't it? What would something like this cost, you ask? Would you believe it's only $48?! What a steal, we're sure you're not saying, because only crazy people talk to themselves (that's right, Volpe). But as Daily Finance reports, $48 only pays for a puny starter kit and access to the Trump Network website for 3 months. If you actually want any of the real materials, you have to shell out $497 for a package containing CDs, promotional materials, and actual samples of the freaking products you'll be selling.

To make the whole dealie even more of a perpetual rube machine, the Trump Network, for all its trumped up (heh) rhetoric of improving people's health and freeing their spirits (???), sells nothing but products that are just as phony bologna as their marketing scheme. As revealed by QuackWatch, the flagship product of the network was the PrivaTest, a urine-testing system invented by a naturopath (from the Latin naturo meaning "natural," and pathos meaning "not a real fucking doctor") named David Macallan.

The PrivaTest purported to be a customized vitamin supplement system which would find all the deficiencies in your diet, but only after you paid "$139.95 for [an initial urine] test, $69.95 per month for the vitamins, and $99.95 for a retest that is recommneded [sic] in six months so the formula can be 'readjusted.'" G'damn that is a lot of money for the pleasure to pee into a cup. Pop down to your local public house and they'll let you do that for free! Once.

Let's let the quaxperts explain another one of the company's exciting not-medicines, with the awful name of Custom Essentials, a phrase we would expect to see on a quarterly progress report alongside phrases like "integrating horizontal synergy" and "dynamic solution-focused logistics":

Another of Ideal Health's sales aids was a CD-ROM that included an "exciting 7 to 10 minute video of inspiring testimonials from top marketers" who say or suggest that taking Custom Essentials has relieved symptoms of fibromyalgia; improved irritable bowel; stopped them from having colds; improved digestion; stopped hair loss; stopped acne breakouts; caused nails and hair to grow faster; increased their energy, increased sex drive; improved memory; relieved aches and pains; improved their appearance; reduced stress levels; drastically decreased their allergies; lowered their blood cholesterol levels; improved sleep; and healed fractures more quickly [3]. Most of these problems are not caused by nutrient deficiencies. Moreover, claims that Custom Essentials could prevent, mitigate, treat, or cure any of these diseases would be illegal without FDA approval, which, of course, the product did not have.

Oopsie! Forgot to get that pesky little FDA approval. Better scrap that idea. MOVING ON.

Never fear, dear meal ticket! Thankfully, PrivaTest and Custom Essentials aren't the only arrows in the Trump Network quiver, as they are also the exclusive distributor of the Silhouette Solution, a prepackaged meal diet that for only two months of instant snacks can lose you some 20 pounds in two months just by sitting on your butt, preparing your own meals, and munching on dehydrated flavor packets that cost about $1,325. Ooh, yeowch.

What's worse is that the program doesn't even let you duck out after those two months. According to all the Ideal Health literature, 3 months are necessary for the weight loss program to even work, requiring you to purchase additional months of powdered foods (around $633/mo) to even complete the basic program. But just look at all these beautiful photos of stock models running and chubby people sucking in their guts. If you can't trust that nice lady laughing into her salad, who can you trust?

When Donald ran for president the last time around (Jesus, why do they still let him do this?), he made the decision to quietly drop the Trump Network from his list of business ventures rather than allow it to be an albatross around his perfectly coifed neck. It's one thing to rip people off with casinos, but it's another thing entirely to sell weight loss solutions from a guy like Dr. Macallan, who openly admits to lying to his patients and legitimate medical professionals when they ask him how his products work.

We'll depart from Mr. Trump for now, as he's starting to leave a hairy taste in our mouths, but don't forget that we didn't even touch on his other, even less legitimate pyramid schemes. All we can say for sure is that if Scott Brown really wants to run for public office again, he's going to have to step up his pyramid scheme game, though we like to think of it more as a reverse funnel.

Let's look into an arena your Volpe has seldom trod, the realm of Sportball! Go Sport Go! Yay Team! Your Volpe cannot claim to have much expertise in this area, what with our being a Certified Sodomite and Professional Poindexter, but one thing we do know is a scam when we smell one, and this one's about as ripe as a season-winning jock strap.

Russell Wilson is a player of football (or as the Europeans call it, "Not-a-sport") for a team called the Seahawks. After suffering a head injury during a game against some ruffians called the Packers (too easy), Mr. Wilson was still able to stay in the game and eventually play in the Super Bowl, which is when you toss two sportballs together in a giant mixing bowl and squirt on some lemon juice with a dash of cilantro we bet. While media outlets criticized medical staff for allowing Wilson to keep playing after basically only checking to make sure he wasn't decapitated, Wilson attributes his miraculous recovery to something else: magical sport water.

Created from patented technology and resulting from years of scientific research, Recovery Water has been proven to support your body’s natural restoration process.

It's the double asterisk they use every time they say "proven science" that gives it that doubly trustworthy feeling.

Recovery Water came up in Wilson's recovery in the course of an interview with Rolling Stone in which the quarterback decided that this was a friendly enough news source to push his latest investment:

Wilson is an investor in Reliant Recovery Water, a $3-per-bottle concoction with nanobubbles and electrolytes that purportedly helps people recover quickly from workouts and, according to Wilson, injury. He mentions a teammate whose knee healed miraculously, and then he shares his own testimonial.

"I banged my head during the Packers game in the playoffs, and the next day I was fine," says Wilson. "It was the water."

But Wilson shakes his head, energized by the subject. He speaks with an evangelist's zeal.

"I know it works." His eyes brighten. "Soon you're going to be able to order it straight from Amazon."

Oh goodie; that means we can order our magic injury water alongside our orders of Bic for Her lady pens and bulk boxes of adult diapers (for our elderly parents, we swear).

Wilson has since tried to walk back his crazy comments by claiming he didn't actually have a concussion, and thus he's not explicitly saying the Recovery Water can fix a brain hemorrhage, but then he made the fatal mistake of trying to clarify without his publicist present. Quote Wilson:

"I didn't have a head injury, but what I was trying to say is I think it helped prevent it," he said. "I think your brain consists of like 75, 80 percent water, so I think that just being hydrated, drinking the recovery water really does help."

Drink Recovery Water: it will prevent your brain from bleeding. That's proven by science**

**This statement has not been evaluated by the FDA, the CDC, or the NAMBLA.