The Snake Oil Bulletin: Maybe A Dolphin Ate Your Baby 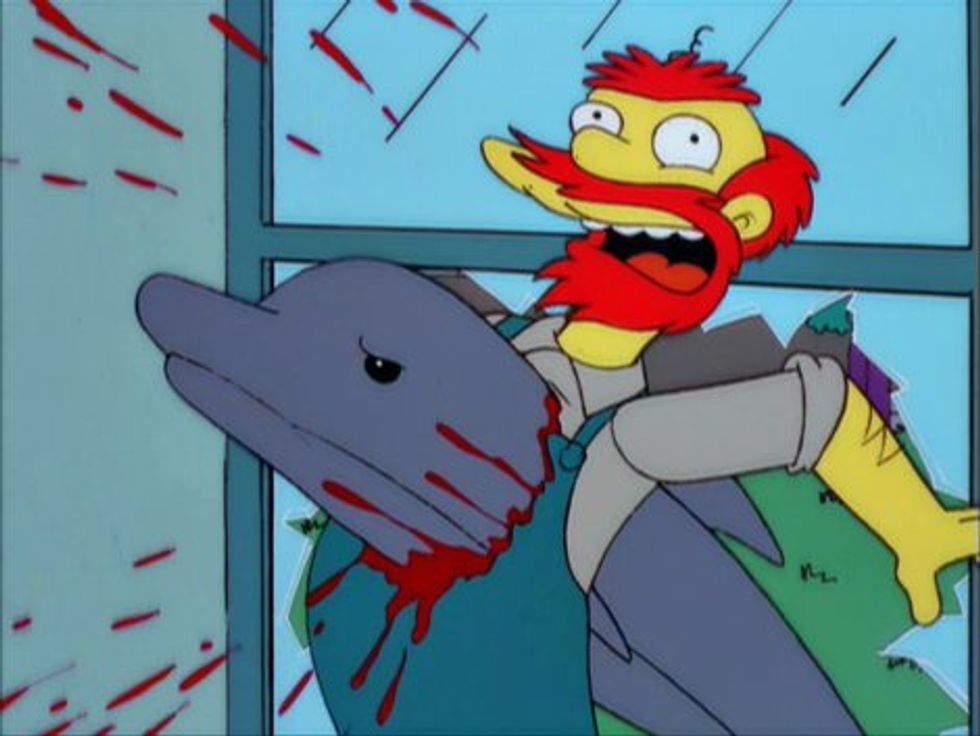 Greetings, friends! It's time once again for the Snake Oil Bulletin, a most special feature on this most special of mommyblogs. Today we're going to delve into the many ways mommies are mommying this world to make the world mommier for mommies! Whether it's how you're going to birth your spawn, or how you're going to dump it on someone else so you can go boozing and pill-huffing for a few hours, being a good mommy takes lots of time and research (and booze, did we forget booze?). Enclosed in today's bulletin are stories of two mommies mommying their very best, and by best we mean they are absolutely the worst.

Anti-vaxxers break out into the childcare game

We open today with a story filed away in our "Surely, nothing will go wrong!" folder. An Australian mother has made the completely S-M-R-T decision to open up a daycare exclusively for unvaccinated children. Wouldn't it have been easier to just rub the kids on a contaminated petri dish?

Juanita Halden ("Wanda" to her friends) is a registered loon from New South Wales who has been in the news before for having choke sex in a pipe to protest big business or something. (Hell no, we are not sitting through an hour-long interview apparently recorded through a bilge pump just for you people.) Wanda is just in an absolute snit about a handful of new Australian laws with the horrible media names of "No Jab No Play" and "No Jab No Pay." (Seriously, who the hell hires the PR people over at the prime minister's office? You couldn't have picked worse nicknames for these policies if you'd called them the "Tony Abbott Wants to Jam Sharp Objects into Your Children with His Needle Penis" bills.)

Earlier in the year, the Australian government collectively decided that oh hey guys, maybe whooping cough and polio weren't such a fun happy time back in the day, so they passed a series of laws that removed the "conscientious objector" exemption for letting unvaxxed kids go to daycare or get tax benefits. No one is forcing vaccine needles into these babies, despite anti-vaxxers' fevered imaginations to the contrary. Rather, any parent who doesn't want to vaccinate their precious indigo child won't get an added "congrats on getting knocked up" bonus check when they fill out their taxes, thanks to a ridiculously lax loophole:

Currently, immunisation is a requirement to access childcare payments and the FTB supplement. But all parents have to do to dodge the requirements is sign a form confirming they have discussed immunisation with a GP and have a “personal philosophical, religious’’ reason not to vaccinate.

Goodness gracious, that sounds almost criminally easy to exploit! Surely no one will have used it ever, right?

Infuriated at being denied money that wasn't actually theirs to begin with, Australian anti-vaxxers promptly declared WAR against Prime Minister Abbott for crimes other than being a dickhead, demonstrating their outrage through protests, online petitions, and oh yeah, viciously attacking a mother whose baby died from whooping cough. Always classy, these fuckheads be. But where there is a market in need, there is a huckster with something to sell, and boy does Wanda sell her nifty idea for a vaccine-free daycare:

The No Vacc Child Care Centre is a project idea. R & D will commence in 2016. I have been approached by a small number of mothers and I continue to receive messages and online comments from parents in support of this stance

It's rare to see a marketer so openly target the freakazoids who comment on YouTube videos, but perhaps we should count ourselves lucky she isn't offering one weird trick for growing a huger wiener.

Wanda's objection to the new law is that she believes it denies kids access to education or daycare, which it doesn't. At all. In fact, as the Telegraph reports:

No child is denied access to child care in NSW. Under the new laws, if children have a medical contraindication to vaccination, are on a recognised catch-up schedule for immunisation, or if the parents or guardians are reluctant to vaccinate on religious or other grounds, the parents or guardian will have to produce Commonwealth forms that have been completed by a GP or nurse immuniser before entrance into a childcare centre.

Under the Federal Government’s NO Jab NO Pay law, conscientious objectors will not be able to claim family payments or the immunisation bonus, a policy Ms Halden said was akin to “slavery”.

Slavery? Oh delightful. We're certain she'd get on swimmingly with those fuckheads who compare vaccination to rape.

Never fear, actual welfare queens. Wanda Halden, Loons, Assorted Crazies, et al. are here for YOU, and they're packing "science" on their side.

“I am of the opinion that proposed No Vax Child Care Centre participants would be in a position of less susceptibility to serious communicable diseases based on the knowledge that the parents of these children already have,” she said.

“They already know the risks, they already know that the heart of immunity boosting and disease resistance lays (sic) within gut flaura (sic) strengthening and that Homeopathic programs offer a safer alternative than the current multiple injection vaccine schedule.”

Do you smell that, dear readers? It's the sound of bullshit percolating in the pot. And yes, we're quite sure that homeopathic vaccines are a safer alternative to literally anything, because it's pretty hard to beat fucking tap water for safety.

For our second story on the agenda, we're going to tiptoe around the touchy subject of water births. We know several friends who've popped a squat in a kiddie pool in order to rocket their newborn out of their cooch, and that's totally cool or whatever. You do you, girl! But at the very least, while those births seemed fishy (god, we are hacks), we can at least say that those births were monitored and assisted by actual midwives, or at the least midwives who had, y'know, thumbs.

This next story is not that kind of water birth. It isn't even a fresh water birth. It's straight up salt water daffy: An Atlanta woman has decided that the best way to welcome her precious Dweezle Moonunit into the world is by pooping him out into the ocean. With a dolphin as her midwife.

Dolphin. As her midwife.

Is it normal for our nose to start bleeding after we feel a sharp twinge in the back of our skull? No? All righty then. Does anyone else smell purple?

Spiritual healer Dorina Rosin and her partner Maika Suneagle are appearing in the documentary Extraordinary Births to chronicle the woman’s journey of giving birth in the sea with a dolphin as a midwife, as reported by The Daily Mail. Experts say the plan poses the risk of other local marine life, like a great white shark, showing up in the water.

The couple run a healing retreat and view nature as a healing power. The pair says they believe their baby will be able to speak “dolphin.”

Danny, you mind helping us out here?

Our enlightened moon children have decided that the best way to introduce their bundle of joy to the world is to drop in uninvited at some nice dolphin's place and get weird goopy placental gross all over their nice clean ocean home. C'mon, lady. Flipper didn't break into your living room and drop a bloody poop machine on your rug, did she? Guests are the WORST.

Rosin believes that dolphins possess healing powers, as she felt miraculously healed after she went swimming with them a few years ago:

In 2011 and 2014 I had the privilege to learn from and with wild and free dolphins and Humpback whales in Hawaii who transformed and healed me in a very profound way.

Ugh, she's one of those people who never shuts up about her vacation. We get it, you reached enlightenment by wearing yoga pants and talking to a few not-white people. Or in this case, not-people people.

While dolphin therapy is becoming a growing trend for temporarily alleviating symptoms of anxiety and PTSD, there isn't any real evidence that dolphins can assist with childbirth. In fact, quite the opposite: all evidence indicates that rather than gentle magical creatures that happily adorn your Lisa Frank trapper keeper, dolphins are the serial killers of the ocean world.

Discover magazine writer Christie Wilcox wrote about a similar story two years ago, when a white couple in dreadlocks decided to pull this same bunk and birth their babe among the porpoises. After a rundown of how often dolphins gang rape each other with the casually tossed phrase "prehensile penises," Wilcox breaks down the dolphin's true nature:

[Dolphins] also get a kick out of beating on and killing other animals. Dolphins will toss, beat, and kill small porpoises or baby sharks for no apparent reason other than they enjoy it, though some have suggested the poor porpoises serve as practice for killing the infants of rival males. That’s right, not only do dolphins kill other animals, they kill baby dolphins using the same brutal tactics.

Aww, so cute! Sounds like the perfect friends to greet the new baaaaaby!

We wish the best of luck to the coming Rosin-Suneagle bundle of joy, and certainly hope that its birth goes swimmingly (somebody stop us or we'll pun again). We'd only like to remind him or her that if a big wet nose tries poking its way into the birth canal, never fear; it's only the teevee camera.