The Snake Oil Bulletin: You Want To Read About 'The Amazing Randi,' The Greatest Woo-Fighter 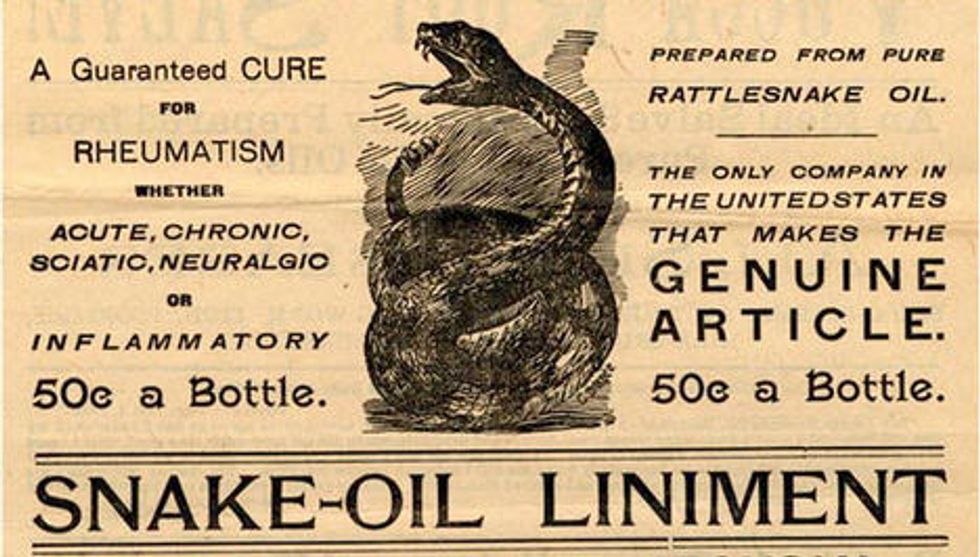 Hear ye, hear ye! Step right up, friends! Contained in this cart is a collection of the finest tinctures and tonics guaranteed to clear up that scrivener's palsy you've developed from writing so many vicious comments all over the electro-visual interconnection net. But first, a piece of important news in the world of snake oil hockery.

First on our round-up, we have to herald the end of an era. James "the Amazing" Randi, master woo fighter and your correspondent's personal hero, has announced that he will be retiring at the spry young age of 86. Randi is the founder of the Committee for Skeptical Inquiry and the James Randi Educational Foundation, two of the world's leading organizations tasked with debunking scam artists, frauds, charlatans, and all manner of related woo woo. This dude is a certifiable old school gangsta, and is responsible for exposing more horseshit than the stable boy at the Kentucky Derby.

Randi began his career as a stage magician and professional illusionist (or in his far more eloquent words, "conjuror") during his tender youth in the '40s. For decades he was known for sleight-of-hand and rather daring escape tricks, but also stood out among his peers for his very open and explicit declaration at the beginning of his shows that everything he was doing on stage was fake. James seemed to take a particular glee in admitting that he was lying for a living. During this time James appeared on the Today show, in which he broke Harry Houdini's record of being sealed in a coffin underwater, and even acted as Alice Cooper's personal stage magician. For those of you seasoned enough to remember, Randi was the guy who would come out on stage and publicly behead Alice with his giant guillotine. Kickass, right?

The guy first made his big waves in the '70s when he'd had enough of the rampant whack-a-doodlism which had gripped the world during the decade's psychic boom. Randi set out to expose the con artists he felt were scamming people out of their hard-earned money and making a mockery of magic while they were at it. He took aim at the biggest swinging dick out there, alleged psychic Uri Geller (the spoon guy), who at the time was making hand over fist on the psychic show racket. Randi was close friends with Johnny Carson, himself a trained magician, and the two of them decided to call Geller out for using garden variety illusions but passing himself off as King Shit of Fuck Mountain, to quote your Volpe's beloved granny.

As you can see in the above clip, Randi also made headlines for exposing that (not alleged) fuckhead Peter Popoff, who was just stone cold stealing people's money, telling enfeebled audience members to throw their medications onto the stage rather than take them, and even placing able-bodied plants in his audience in wheelchairs and then pretending they could miraculously walk after Popoff healed them. Seriously, that guy can feast upon a sumptuous banquet of lightly salted poisoned rat dicks.

Randi started to make a living debunking assorted frauds, including Moe Howard in the disco pajamas here. The guy's brass cajones only increased in size when he issued a challenge to all assorted psychics: prove that you can do what you claim to do under controlled test conditions, and you get fucking beaucoup dollars, brotha. Originally the challenge started with a prize of ten thousand, then a hundred thousand, and finally a million dollars. Even though hundreds have tried, to this day no psychic, dowser, palmist, aura reader, psychometric, or rumpologist (NSFW) has been able to win the million, probably because they're all so busy picking winning lotto tickets we bet. And yes, that is Sylvester Stallone's mom offering to look at a picture of your butt to read your fortune. This is a glorious age indeed.

Randi's biggest bugaboo in his later years was homeopathy, the biggest medical scam since the four humours.

To sum it up, because Zoroaster only knows we'll be touching on this nonsense again, homeopathy has a few basic tenets, and the best thing about it is that none of the tenets are based in science, which makes it so much easier for the magic to work:

Randi considered the proliferation of homeopathic medicines in pharmacies to be one of the biggest scams in history, which it is. He wasn't exaggerating when he said there's no medicine in it because there's no fucking medicine in it. He proved this by downing an entire bottle of homeopathic sleeping pills in one go every time he got on stage, and the dude is still kicking at 86 and grew a majestic beard while he was at it.

Randi wrapped up his badass train by kicking colorectal cancer in the balls thanks to an ancient Eastern diet of chemotherapy and real fucking medicine, and then deciding to round off his career by coming out of the closet at age 81. When you make a living exposing lies it only makes sense to be honest with everyone else.

He's like a jolly gay Santa with no patience for liars and no time for your shit. And considering that not even cancer could shake this guy it only makes us more hopeful that he'll continue being a bearded badass for the next 86 years of his life. Thanks for all you've done, James. You've been a personal hero to this humble correspondent and I know I'm not the only one. We can only hope that your next phase of life is a long one indeed, and that on the day that Great Atheismo Himself decides to take you to his great big rational thinking conference in the sky, he'll give you a pat on the back and say, "A life well lived."

After that tribute to a personal hero of ours, it seems only fitting that we'd move onto two asshats we can only describe as the worst, just the absolute worst. Deepak Chopra is your aunt's favorite source of nonsensical quantum consciousness giving rise to soul-filled formless happiness. If you had no idea what any of that meant, don't worry, neither did Deepak!

Joining our favorite purveyor of quantum nonsense is Tony Robbins, that guy with the giant teeth that everyone vaguely remembers as being full of shit but no one can quite remember why because he's just so dull. Well despair no more! Now you finally have a quantifiable bit of something to point to next time you have to remind yourself why he's the kind of guy that loves the smell of his own farts.

Chopra joined Robbins on the latter's radio show (?) to discuss ... something. Our ability to decipher Chopra's nonsense declines as our level of not-giving-a-shit-ness increases, so fuck if we know what the hell he's talking about. Take our advice and jump to the 22:22 mark, unless you enjoy feeling your brain slowly ooze out of your ears.

The key exchange comes in right around here:

Chopra: HIV may be a precipitating agent in a susceptible host. The material agent is never the cause of the disease. It may be the final factor in inducing the full-blown syndrome in somebody who’s already susceptible.

Robbins: But what made them susceptible?

Chopra: Their own interpretations of the whole reality they’re participating in.

Robbins: Could that be translated into their thoughts, their feelings, their beliefs, their lifestyle?

So if we get Deepak's meaning, he's saying that the only way you get AIDS...is if you think you have AIDS? Uh, then how did the first victims develop AIDS before we even know that AIDS was a thing? Oh what's that? We're all out of time? Thank you so much for having me on, Oprah.

Right around 32:41 they assert that Magic Johnson's taking of the HIV medication AZT is destroying his immune system and is only killing him faster. Considering Magic has been HIV-positive for 24 years and is healthier than ever thanks to his medications of AZT and anti-retrovirals we're going to file that claim in the Great Big Fucking No category.

We'd like to remind Chopra and Robbins what happened to the last group of people who publicly denied HIV caused AIDS, that being the HIV/AIDS denialist magazine Continuum. The magazine shut down in 2001 after the entire editorial board died ... of AIDS. They tried their damnedest to change their interpretations of the whole reality they were participating in (seriously, what the fuck does that even mean?), but you can't fight medical science for long before it catches up to you, and no amount of consciousness expansion is going to cure that.

Gwyneth Paltrow Says You Should Steam Your Vagina, Like It's a Fucking Vegetable

Your Wonkette has stuck a finger into the slippery subject of vagina steaming before, but we never really got into the pink of it until now.

Gwyneth Paltrow is a Hollywood talky lady who says things other people write for her and then makes money for it, and we admire that. If someone is willing to throw money at you for mugging into a camera we say go be the absolute best at it because damn if that isn't a great gig. However, did you know that her expertise in side-eye camera smiling also makes her an expert in gynecological hygiene? It's twue, it's twue!

Paltrow's blog, which is not-even-ironically called Goop, recently ran an endorsement for Tikkun Spa in L.A., a Korean sauna that features, among other hipster buzzwords like "Himalayan salt brick tile," the magic of V-steam, which Paltrow describes like so:

...[T]he real golden ticket here is the Mugworth V-Steam: You sit on what is essentially a mini-throne, and a combination of infrared and mugwort steam cleanses your uterus, et al. It is an energetic release— not just a steam douche — that balances female hormone levels.

A bidet. It's a fucking steam bidet for your vulva. Gwyneth Paltrow wants you to cook your vulva in order to balance female hormones, which we're pretty sure don't generally come in vapor form, but what would we know?

Fortunately we have actual OB/GYN Dr. Jen Gunter to come out and say "Yeah, please don't steam clean your vagina. It is not a suit." She ends her analysis of vaginal steaming with a paragraph we can only conclude would make her a wonderful addition at your Wonkette:

Steam is probably not good for your vagina. Herbal steam is no better and quite possibly worse. It is most definitely more expensive.

Steam isn’t going to get into your uterus from your vagina unless you are using an attachment with some kind of pressure and MOST DEFINITELY NEVER EVER DO THAT.

Mugwort or wormwood or whatever when steamed, either vaginally or on the vulva, can’t possibly balance any reproductive hormones, regulate your menstrual cycle, treat depression, or cure infertility Even steamed estrogen couldn’t do that.

If you want to feel relaxed get a good massage.

If you want to relax your vagina, have an orgasm.

You heard her, ladies. Go out and get all the orgasms you want. Hell, you don't even need to leave the house for that. Ask the gentleman or lady in your life for a little help, or if you're more interested in flying solo, tonight set a little mood music, light a few candles, draw a bath with just the perfect amount of lather, and treat yourself. It's the doctor's orders.

Flotsam, Jetsam, And Whatnot

Lastly we'll return to a few outstanding stories your Wonkette has been following with rapt attention, because JESUS CHRIST VACCINATE YOUR KIDS ALREADY.

Well that's all for this week. Tune in next week when your Dear Friend Volpe will have more samples of delicious cure-alls to ease the mind and slim down that wallet just in time for Valentine's Day! Until next time, friends!