The Triumphant Return Of Cartoon Violence (And Horrible Manimal-Things) 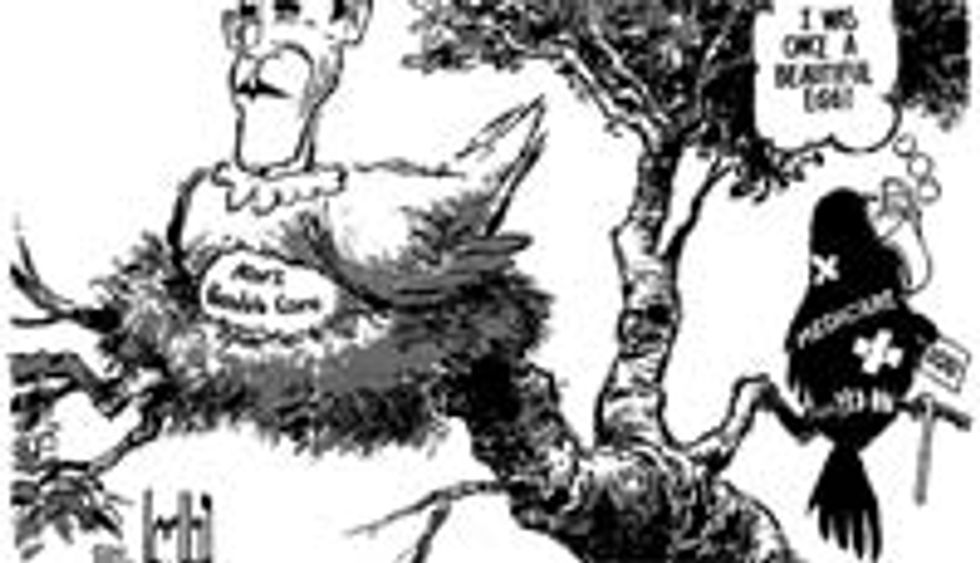 By the Comics Curmudgeon
Hey, everybody, did you miss your Cartoon Violence? I'll bet you did! Your Comics Curmudgeon missed you too, though I have to say that I didn't miss wading through hundreds of political cartoons on a regular basis, satisfying as it is to smite ’em in the end. And as I dove head-first into the hellscape of Slate's Cartoon Box, I discovered that nothing had changed during my sabbatical: the cartooning class's obsession with the sex lives of nightmarish man-animal beasts was still in full effect.

Have you forgotten that you can click on the cartoons to make them bigger?

It began innocently enough, as these things do, with an attempt to kill brown people overseas. Sure, our terrifying flying death-robots were getting pretty good at blowing stuff up, but they needed to be repaired and fueled, and even at recession-lowered prevailing wages, the cost of hiring some video game master to fly the things took a bite out of the DoD's budget. But what about our animal friends? They work for free, and, if we pick the right ones, they'll keep themselves alive by drinking the enemies' blood! Thus, in a decision that couldn't possibly have any negative consequences, the U.S. let loose a swarm of enormous genetically engineered mosquitos to disable the Iranian leadership and nuclear researchers, via extreme itchiness.

But as usual this devil-science got out of hand, and soon millions of Americans caught genetic mutations! The first to suffer was our president, since, as is his wont, he personally supervised the mosquito-building program. A big jar of eagle genes got spilled on him, and before you know it there he was, up in a tree, stone cold sittin' on an egg. In a slightly more useful development, the head of Medicare was transformed into a vulture, the better to peck at the half-dead bodies of elderly Americans buying healthcare with our tax dollars.

The GOP was quick to criticize Obama as a liberal mutant traitor. But they were also quick to emulate his newfound popularity among furry fetishists. The Senate Minority Leader, always a big team player, decided to take the first hit for Team Republican, and agreed to have carnal relations with a monstrous walking land shark, in order to produce hybrid babies. Of course, being a "family values conservative" from America's heartland, he had to marry it first, before the eyes of a flippered God.

But, it was too late -- the literal virus of man-animal mutation, and the "idea virus" of man-animal fucking, was already loose among the Republican rank and file! Here we see the iconic GOP elephant negotiating the terms of some safe, sane, and sexy B&D play with a pig. That's a healthy expression of sexuality, kids! Doesn't it prove that they're just like us? No, wait, it proves they're terrible sex perverts, never mind.

Later, some Tea Partyers took things to their logical extreme, sodomizing themselves with guns in hopes giving birth to some kind of awesome heavily armed cyborg baby. It did not go well.