The Truth About Barry 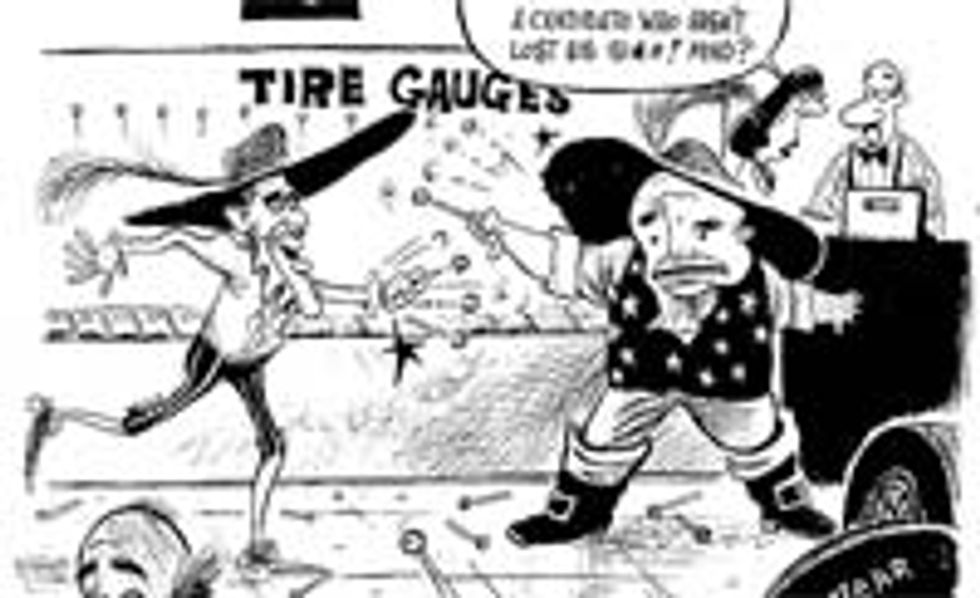 Hey, everybody! Did you miss me? Of course you did! Your Cartoon Violence had to take a little vacation because the cartoons were hurting my brain, again and again, until I had lost the ability to think or feel joy. But now I'm tan, rested, and ready to take on the political cartooning establishment! Join me after the jump to find out how bad it's gotten.

So, where were we, three weeks ago, when last I looked at the funny pictures? Oh, that's right! Hopey was riding into the promised land on a donkey in stone-faced triumph, sharing a terrorist fist-bump with his lovely seraph of a wife, crowned in celestial glory by the Holy Oprah herself! He was followed by thousands of cheering, glassy-eyed minions who would do anything for him, hold up any sign, no matter how large, while his internal enemies had been cast out into the outer darkness, stripped of their finery and forced to use their bare hands to protect their genitals.

Obviously he couldn't keep that up that level of popularity. In fact, maybe it's turning out that Barry's Democratic critics were right, that we didn't know enough about him, and that the bad stuff would eventually come out. And obviously it did -- in cartoon form! Let's see what the cartoonists have discovered about Obama's proclivities, shall we?

Well, the first thing is that he likes little boys, obviously. That's why he's mastered the hip texting thing -- the better to interact with his favorite sexual prey, the freckle-faced twelve-year-old. He's always sending them rude and inappropriate messages, like "what r u wearing" and "hey u want 2 hear about my economic plan" and "joe biden is going to be the best veep EVAH!!!!1!1"

Now, we're not saying that Obama feels good about this or anything. He's actually rather tortured by it, so he deals with his forbidden lust the only way he can: by actively trying to prevent the birth of new children. That's why he's here in a dumpster behind an abortion clinic, beating fetuses to death with a bat. They'll just grow up to be little temptations!

But even when Obama's sexual appetites are legal, they're certainly not ... normal. Not the kind that ordinary, non-arugula-eating middle Americans can relate to. I mean, sure, every red-blooded American male's fantasy is to have a three-way. But not with a lady and another dude, that's totally gay. And not out in public -- gross. And certainly not with the Clintons.

Even his hobbies are coming under fire! Sure, in certain circles, dressing up in foppish Musketeer-like garb and challenging enemies to a fencing match might be considered good clean fun, but Barry's not running for president of the SCA. Even Paultards prefer manlier broadsword-and-chainmail antics to Richelieu-era cosplay. When John McCain does it, though, it's all on the up and up, because this is the style of clothing that was popular when he was a youth.

McCain, by contrast, has had a pretty good couple of weeks. He's really showing the American people that he's someone they can relate to, not a weirdo like his dorkwad opponent! Here you can see him taking part in the sort of pastime ordinary patriotic men do every night across this great land of ours: coming back to one of his eleventy jillion houses and angrily demanding sex from his unwilling wife. That's leadership we can believe in, my friends!