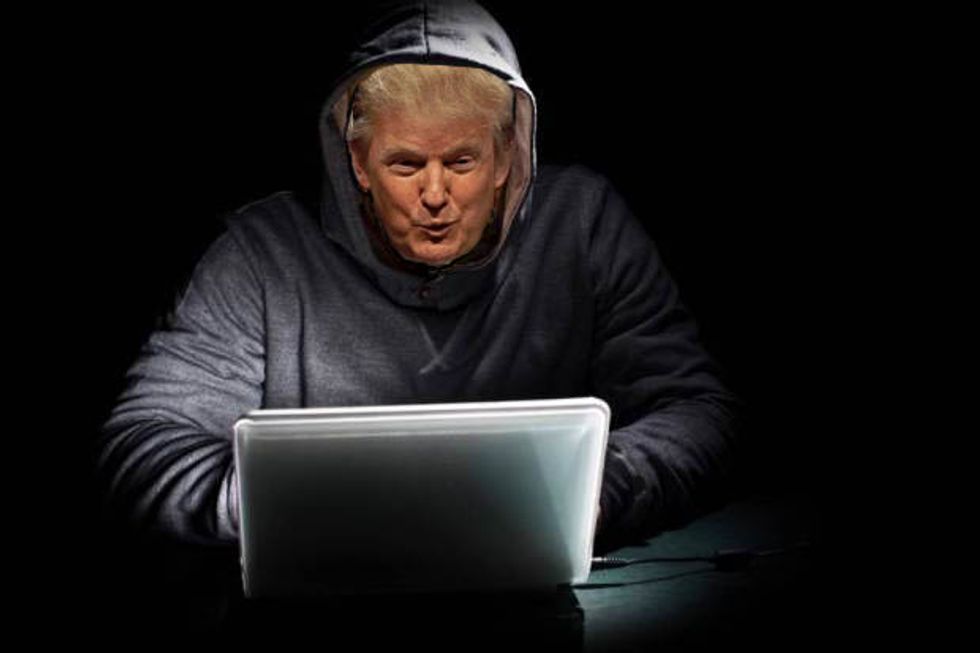 It's no secret that the NeverTrump Trolley wobbled brokenly into Cleveland, where it was then mercilessly beaten to a gooey red mess live on cable television. Trump had already locked up the nomination, and there wasn't much Ted Cruz and his conservative avengers could do to boot Trump off the ticket beyond shouting, pouting, and upstaging the keynote speaker. But as the road to Cleveland caused some in the GOP to step out on the precipice of insanity, at least one convicted con-man totally crossed the line.

Way back in the old-timey days of 2014, Steven Wessel was arrested for fraud just a few months after finishing probation on a completely separate fraud conviction. This time around Wessel had been claiming to be an investment adviser trying to start a non-profit research and advocacy group for U.S. military members and their families (it was really a second-rate ponzi scheme). Wessel was eventually convicted of trying to bilk $499,000 from an investor and was sentenced to 55 months in prison for being a lying, cheating scumbag this past January.

Wessel had a penchant for grandiose claims. He bragged about a bogus doctorate from Oxford and oozed his way into fancy dinner parties, yacht clubs, and other stupid crap that only the filthy rich care about. Wessel boasted about how his father was an ex-CIA operative, he wore a Secret Service American flag pin, and claimed to have connections to the Reagan and Poppy Bush White Houses, respectively. Of course it was all bullshit, and Wessel looked like an idiot when he apologized in court.

Wessel was ordered to report for federal prison in April, but rather than take stock of his personal affairs before fucking off to prison for the next four and-a-half years like a normal white-collar asshole, he created a fake Twitter handle and began trying to pump NeverTrump conservatives for information on how they were planning to take on Donald Trump during the primaries.

Commonly known as "catfishing," Wessel posed as a number of phony people and then engaged them on the Interwebs like a Nigerian prince who's just discovered a long lost relative. For several months Wessel went under the now-deleted Twitter alias @JustBeingMeagan, and claimed to be Meagan Lancaster, an American ex-pat lawyer in England. As Lancaster, Wessel tweeted up a catty storm with fabulously famous Fox teevee people like Greta Van Susteren, but he targeted a few vocal NeverTrumpers and Republican strategists like Cheri Jacobus.

Lancaster dished to Jacobus about a concocted personal life, claiming to have had an extramarital affair with [Lee] Atwater and talking of made-up plans to meet with CNN host Chris Cuomo in Paris. Jacobus now believes this was designed to induce her to confide personal information to Lancaster that could be used to blackmail her.

Lancaster lavished Jacobus with two $250 gift certificates to the Mandarin Oriental hotel, which Jacobus now cites as additional evidence that Wessel, left broke by his legal troubles, was not acting alone. And Lancaster wrote breezily in emails of a glamorous lifestyle, telling Jacobus at one point that she was jetting off for a ski weekend at St. Moritz in the Swiss Alps.

That whole "not acting alone" part we'll get to in just a moment, but for now let's get back to Wessel himself. After some months of talking, Jacobus got a phone call from someone who claimed to be an adviser to Carly Fiorina's campaign. One of Fiorina's donors had died, the caller said, and was being replaced by said caller. Lancaster/Wessel/whatever said the advisory group he represented wanted to set a big pile of cash on fire for the NeverTrump war effort, so Jacobus put the mystery caller person in touch with Rick Wilson and Liz Mair who were running the anti-Trump super PAC, Make America Awesome.

Lancaster told the pair that her clients needed to know what the group had on Trump before deciding to make an investment, and asked detailed questions about the group’s strategy, according to Wilson and Jacobus. Mair and Wilson stopped playing ball, and Wilson came away convinced that he was being targeted by a political opponent.

Jacobus says she became worried that Trump and Lewandowski were trying to take her down (politically). According to Jacobus, Trump & Company actually contacted her with a job offer, but she told them to piss off and they took it personally. After Lancaster/Wessel said s/he'd put Jacobus in touch with a lawyer, it didn't take long for Jacobus and the lawyer to smell some something funky. When Jacobus and the lawyer asked Wessel/Lancaster for an official email address, Lancaster/Wessel sent them one from a domain so new it still had the "just registered today" sticker. The website's registration said it belonged to "Wes Wessels," with a listing for a D.C. phone number, and the address of a lady named Peg Butler, who lived on New York's Upper West Side.

Jacobus tracked the IP address from the Fiorina adviser and discovered a connection to the disgraced and defunct Make America Great PAC, which went bust after it got caught playing footsy with Lewandowski and the Trump campaign. When Jacobus googled Wessel's name she found the 2014 articles detailing his ponzi schemes, and she decided to warn Butler. However, when Jacobus went to New York to warn Butler she found (BRACE YOURSELVES) Peg Butler and Wessel are married!. Coincidentally, the @JustBeingMeagan Twitter handle belonging to Lancaster/Wessel was deleted. How convenient!

Jacobus went to the same New York court that had convicted Wessel, which immediately pulled his bail and sent his freaky ass directly to jail with a "Do Not Pass Go, Do Not Collect $200" order. Jacobus then filed a suit against Trump and Lewandowski for defamation. Trump & Company says it's all bullshit, but the story isn't over yet!

In one last bout of complete what-the-fuckery, after reporters began calling to let them know a story was being published about this weird bastard's shenanigans, thousands of emails from Jacobus's AOL account disappeared. Jacobus says she reported the apparent hack to the FBI, but it's anyone's guess as to what the FBI might find. The tweets to @JustBeingMeagan are still online, and everyone involved received a $250 gift card to a fancy hotel/restaurant, so there's that. But the really spooky part is the fact that Jacobus's hack is just another in a campaign that has seen so many hacking attempts aimed at wounding political operatives and organizations that are all anti-Trump.