There Will Be Tea: Liveblogging America's Return To Slavery, Part IV 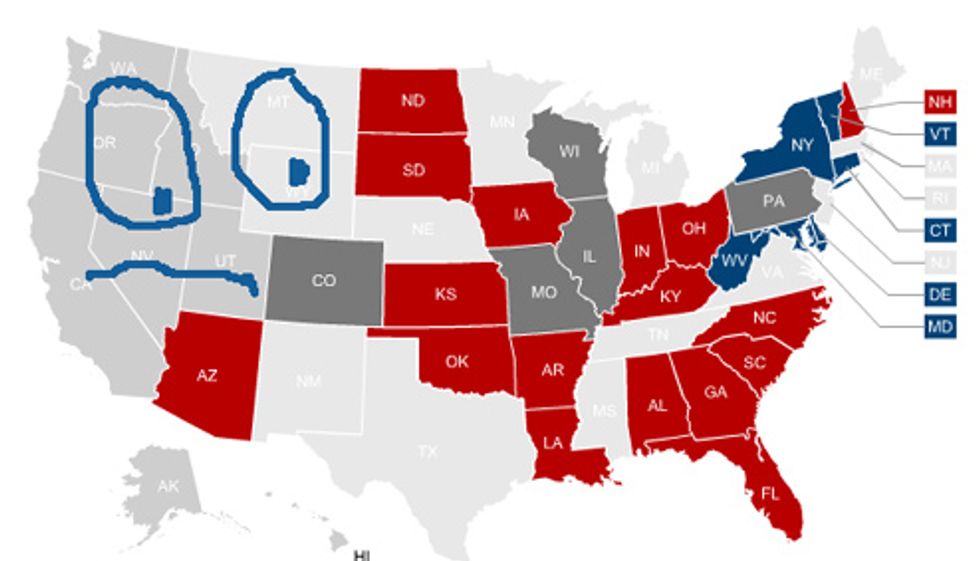 Is this still happening? Has Rand Paul bankrupted America and outlawed blogging yet? We're entering HOUR FOUR of this teabagstravaganza, and we're still weeping for the loss of Our Christine ("You") because comedy is going to be in short supply, forever, and she was our queen! Well whatever. At least John McCain won his easy-ass had-it-forever Senate seat, so ol' Walnuts will still be around to yell at clouds.

10:08 PM -- And what exactly is lost, should the GOP/TeaPee take over the House again? What are they going to do to "get back" at the Democrats, pass a bunch of environmental legislation and climate change legislation and stop the wars in Afghanistan and Iraq?

10:12 PM -- Haw Haw, Michele Bachmann is on MSNBC talking to Chris Matthews. It is wonderful. She is dressed wonderfully. Matthews wants to know if Michele will investigate all the Democrats for un-American activities.

10:13 PM -- She won't answer! She just says "the economy is job one." So, presumably, Job Two is investigating Democrats for un-American attitudes.

10:17 PM -- Now Matthews is actually having to explain his 2008 excitement about Obama; he is sticking to the anti-American investigations Bachmann has said (on his show) that she would lead.

10:18 PM -- Do not miss PART III (the one where Jar Jar gets raped/killed) of our Liveblogging, which is here.

10:20 PM -- The Twitter flow of gibberish is subsiding, at least from the Washington Media/Political People we follow. Did everybody just get high and go to bed?

10:25 PM -- The hair on Palin is IMMENSE. Never seen that much hair. Her neck can barely hold it up.

10:26 PM -- It's getting terrible now. Eric Cantor won't leave MSNBC, Bill Bennett has eaten all of his co-panelists.

10:30 PM -- We need some Conventional Wisdom to make it through this Long Night of the Soul. Let's go check the New York Times!

10:31 PM -- "Republicans See Big Gains in House: Tea Party Propels G.O.P. in Senate, but Democrats Are Ahead in Key States"

10:33 PM -- Does Campbell Brown sit sadly tonight, drinking scotch and cursing at CNN? What about Aaron ... Brown? Was that his name? Dan Rather was jabbering nonsense on one station or another earlier today, so he's happy we suppose.

10:40 PM -- But the states with all the people and money (the "liberal elite states") are still pretty heavy wins for the Democrats. (Florida had people, but no money.)

10:45 PM -- Using his usual "people can be divided up into tenths, like dimes" methodology, Nate Silver predicts 51.6 Senate seats for the Dems and 48.3 for the Republicans.