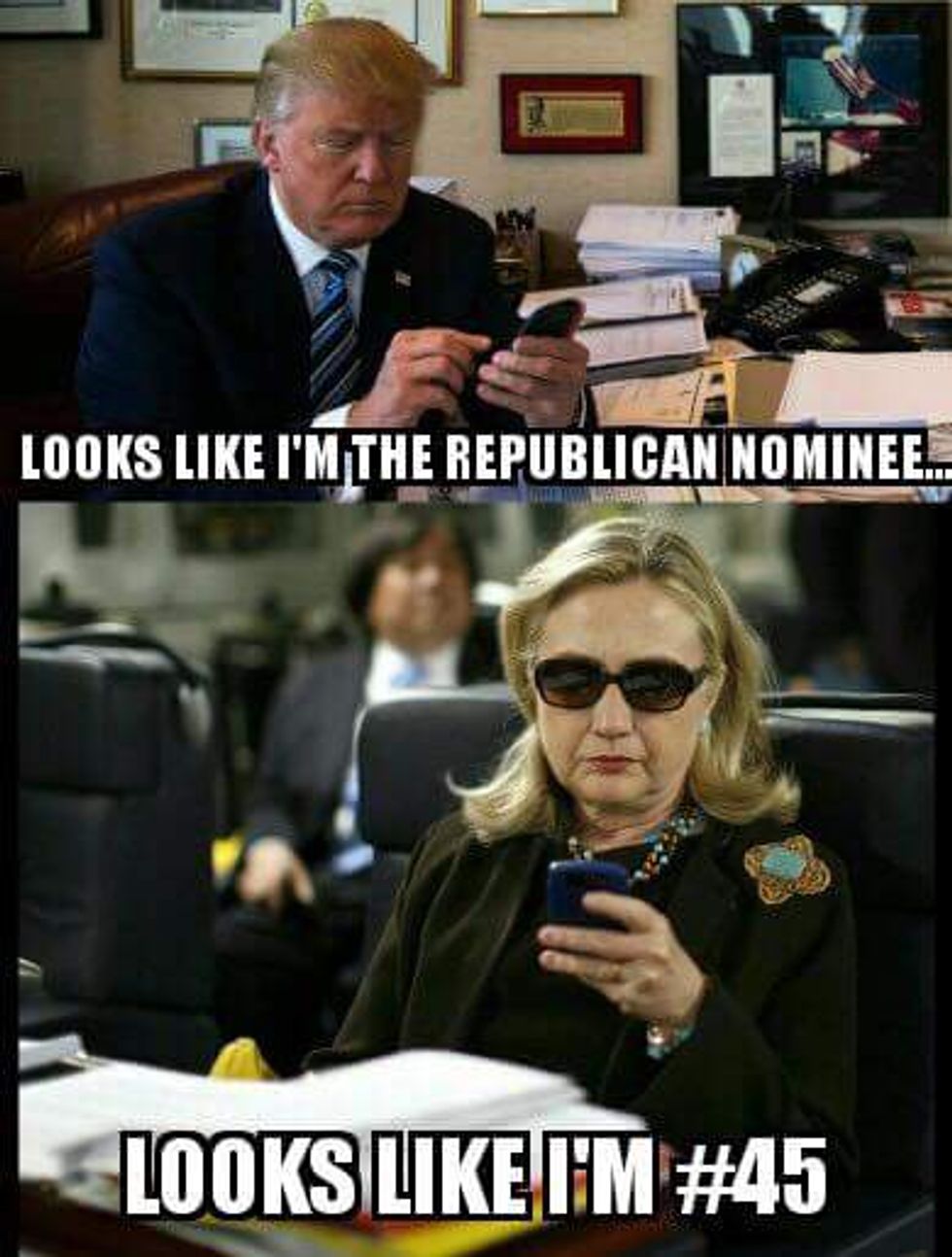 Oh look, it is Friday afternoon! Shall we write a nice happy thing about how Donald Trump's campaign is clogging up the shitter so hard no man-made plunger may be able to fix it, and how Hillary's just come out with a bunch of GREAT new ads about what a fuck-up he is? Oh, there are other stories out there. Ted Cruz jacked off to the phrase "Radical Islamic Terrorism" on the Senate floor for twenty minutes on Thursday. Scott Baio crept out of his sad-ass cocoon to call Obama a terrorist sympathizer on the Fox Business Network, and whined about how Hollywood is mean to him because he loves Donald Trump. (Hollywood is mean to Scott Baio because he is a bad actor whose career is not necessary.)

[wonkbar]<a href="http://wonkette.com/603021/donald-trump-loves-the-gays-so-much-he-wants-them-to-go-outside-on-this-nice-day"></a>[/wonkbar]But fuck all that noise. These ads are DELICIOUS. To begin, we have Hillary responding to Donald Trump's very hilarious belief that he is the TRUEST friend to the homosexuals, because he will bomb the Muslims to death. How does this ad respond? Oh, it just shows him saying a bunch of things about how he is against marriage equality and would nominate Supreme Court justices who would overturn it. Hillary is so dirty, using Trump's own words against him!

Our next ad commemorates June 16, 2015, the fateful day Trump decided to announce his campaign for the presidency. Hillary's response -- has it really only been a year? Because it feels like Trump has been making our collective American ass itch for WAY longer than that. This ad, also too, uses a bunch of Trump's words against him, because holy shit, what else needs to be said? [wonkbar]<a href="http://wonkette.com/600420/donald-trump-had-some-opinions-on-his-one-year-old-daughters-tits-because-obviously"></a>[/wonkbar]You are eager for more goodness from the Hillary Clinton Emailghazi Emporium Of Advertising, we can tell. And you are also saying, "Hey, is that lady good at anything BESIDES playing ping-pong with Donald Trump's little balls?" She is glad you asked! Here is an ad called "Always," which is about all the work Hillary has done on behalf of children for decades. What did Donald Trump do for the children besides chit-chat about his baby daughter's future tits? And here is an ad called "Quiet Moments," and it's also about The Kids. (Bet you thought it was about the "quiet moments" she had when she was doing Benghazi all by herself at home alone. WRONG!) With all that niceness, we probably need to cleanse ourselves with something real mean. Oh, look, here is an ad NOT from Hillary's campaign, but from a silly super PAC called Americans Against Insecure Billionaires with Tiny Hands, about how Donald Trump's hands are so super tiny, like can he even pick the phone for that 3 AM phone call, or is it too heavy? If he wanted to bomb the shit out of ISIS, could he even push the red button, or would he have to get Melania to help him? And finally, because Father's Day is Sunday, the Florida Democrats have made a bunch of vintage '50s-style ads about what a horrendous, woman-hating pig Trump is, but they are all framed as Father's Day "advice" from Trump, on how to keep your little lady in line and whatnot. Here is the first of the series, and if you want to watch the rest, click on this link.Weren't those all so very nice? Now you may all go have a nice weekend, filled with good cheer, because Hillary is going to CREAM Trump's ass in this election, oh my god.