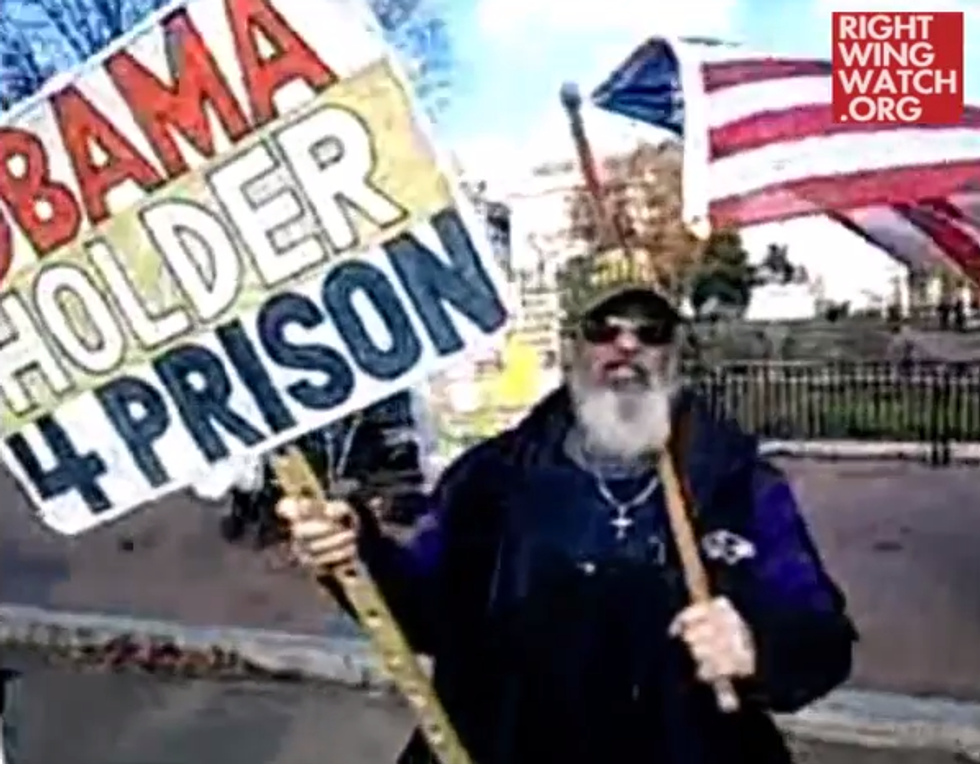 Everyone knows that it was Jesus who wrote the Constitution, and what better way to exercise your biblical rights to petition your government than to gather half a dozen like-minded 'Mericans outside the White House to have a good chuckle about killing the president?

As reported by RightWingWatch, these idiots wanted to let President Obama know just how much they hate immigrants -- er, um, love their country -- with some revolutionary cosplay and some flags from the good ol' days of Real America, and of course some charming jokes about lynching, HARDY HAR HAR.

Some poor guy or chick who picked the short straw at RightWingWatch apparently suffered through more than TWO HOURS of this filth to bring us a couple minutes that really capture the spirit of the event.

This president aids our enemies with taxpayer dollars. He has funded the Muslim Brotherhood. He has funded Al-Qaeda. And he funded illegal sales of weapons to cross our borders from America into Mexico. It's called the Fast and Furious scandal. We have a lawless president in this White House, America.

Aw, that's nice. Nothing we haven't heard a million times before, and boy is that getting boring, even when it's being spittled through a bullhorn by a guy dressed as Thomas Jefferson. Actually, that's getting pretty old too. But if you really want to feel dirty, there are some other comments from some of the other fine Americans who showed up to suggest that we "hang the lying Kenyan traitor!"

"Plenty of trees in the front yard," chuckles some other off-screen racist -- oh no, did we just inject race into this?!? -- "wouldn’t be the first one hung on one of them trees."

We are not going to suffer through the whole two hours of the original video because that is not the kind of pain that hurts so good, but the recording of the event opens with this again-quite-subtle position:

Most people in America voted for Obama, not because of his policies, but because of the color of his skin. They were ignorant, low-information voters. They were lied to. We were lied to. It's time that we tell this president to get out of our White House. That is our pen. That is our phone -- that we pay for. If we could take that pen and phone, and tell him to stick it where the sun does not shine -- we will not take this lawlessness anymore.

We'd wonder if perhaps the Secret Service might want to look into these people standing right there, casually "joking" about lynching the president -- if the agents aren't too busy texting their buddies instead of doing their jobs -- but disgusting as these protesters are, it's hard to take them all that seriously when they can't even manage to get more than a dozen or so of their friends together for an anti-immigrant rally. So we highly doubt their organizational ability to round up some True Patriots to storm the White House and rectally hydrate the president with his phone. Besides, we live in a post-racial America now, so there's no reason to even talk about this in the first place.