Things You Can Learn In A Christian High School Textbook, For Real (Part I) 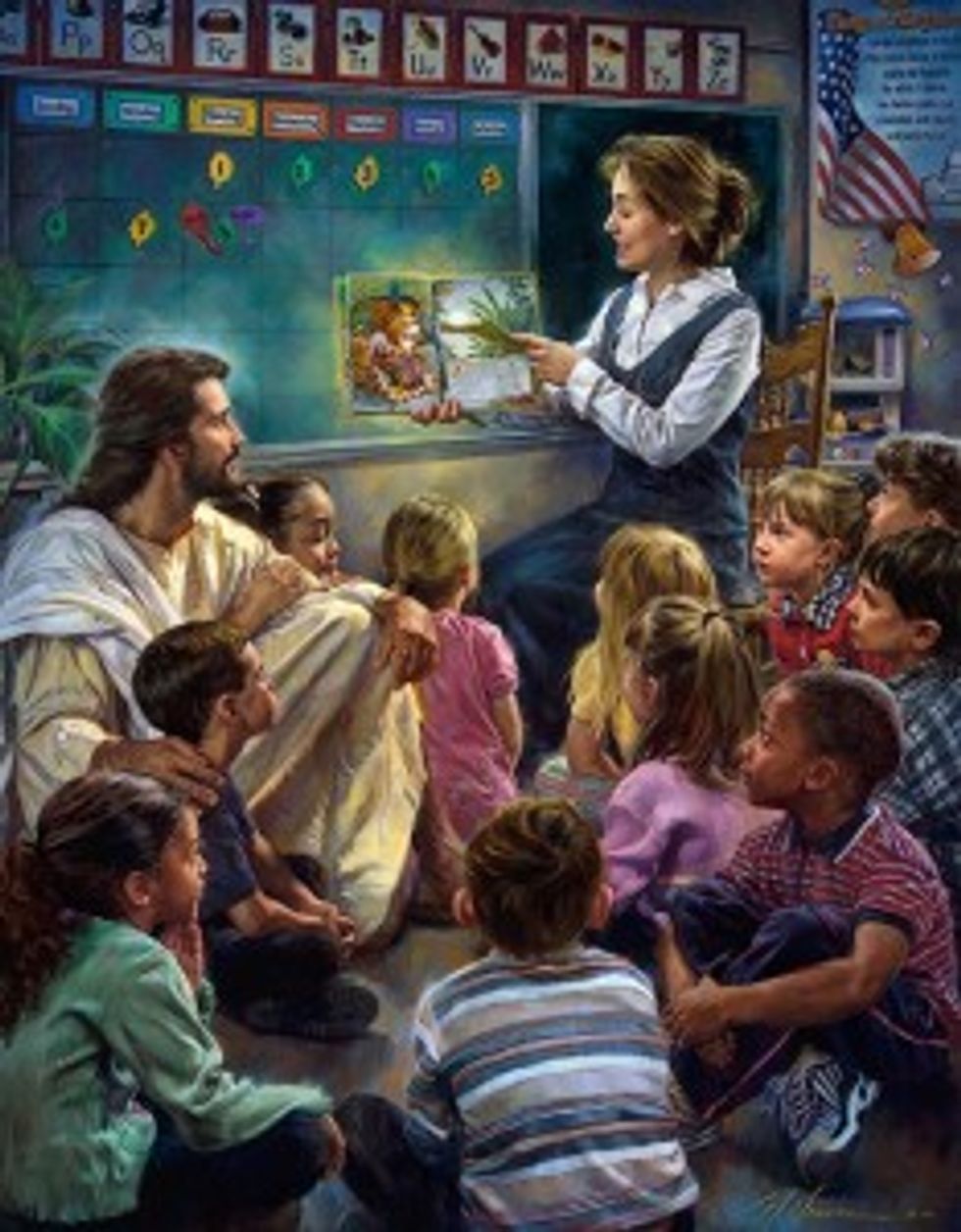 As we all know by now, Louisiana is experimenting with freeing their children from the tyranny of the Government Schools, and will soon, maybe,start spending public school funds on vouchers for kids to attend any private school their parents want (unless it's an Islammy school, of course). And as we also all know, this will open the door to public funds being spent on some rather innovative "science" curricula.

The hippie freaks at Mother Jones ran a fine story detailing some of the fun stuff to be found in textbooks published for the Christian School and homeschool market. Sure, the Earth is 6000 years old and The Flintstones is biologically accurate, but that's old hat. Let's get beyond Creationism and see how Christianists teach other subjects! For instance, early 20th-Century history:

"[The Ku Klux] Klan in some areas of the country tried to be a means of reform, fighting the decline in morality and using the symbol of the cross. Klan targets were bootleggers, wife-beaters, and immoral movies. In some communities it achieved a certain respectability as it worked with politicians." -- United States History for Christian Schools, 3rd ed., Bob Jones University Press, 2001

Or this revisionist view of the Great Depression, in which we learn it ain't no thing after all:

"Perhaps the best known work of propaganda to come from the Depression was John Steinbeck's The Grapes of Wrath…Other forms of propaganda included rumors of mortgage foreclosures, mass evictions, and hunger riots and exaggerated statistics representing the number of unemployed and homeless people in America." -- United States History: Heritage of Freedom, 2nd ed., A Beka Book, 1996

Or maybe this intriguing spin on mathematics?

"Unlike the 'modern math' theorists, who believe that mathematics is a creation of man and thus arbitrary and relative, A Beka Book teaches that the laws of mathematics are a creation of God and thus absolute…A Beka Book provides attractive, legible, and workable traditional mathematics texts that are not burdened with modern theories such as set theory." -- ABeka.com

Maggie Koerth-Baker has an outstanding exploration of the possible "anti-Biblical" implications of set theory over at BoingBoing, and we urge you to go over there and read it as soon as you're finished with your Wonketting. Really, go read it. It's Sunday, you filthy heathens, we already KNOW you aren't in church. Then come back here for a nice dirty secular chat.

The Mother Jones bit that really intrigued us was a couple of brief excerpts from Elements of Literature for Christian Schools, published by Bob Jones University in 2001, which appear to dismiss Mark Twain and Emily Dickinson because of their spiritual failings: "Twain's outlook," we read, "was both self-centered and ultimately hopeless … Twain's skepticism was clearly not the honest questioning of a seeker of truth but the deliberate defiance of a confessed rebel." And Dickinson "viewed salvation as a gamble, not a certainty. Although she did view the Bible as a source of poetic inspiration, she never accepted it as an inerrant guide to life."

Hmmm, thought Your Correspondent, we would like to investigate this Bizarro-World further! Happily, you can get just about anything on ebay, and so, Dear Wonketteers, we present Part One of our exploration of this 10th Grade Literature textbook from Parallel Earth.

It will come as no surprise to learn that the Christian Right has a decidedly special view of the world, one in which the Bible is, at least in theory, central to everything -- even basic logic. The literary texts in Elements are pretty unremarkable, really -- there's a fairly conventional mix of poetry and prose, a bowdlerized version of Romeo and Juliet, and a few personal essays. (Unsurprisingly, the selections are almost all by men. Including Dickinson, only five women appear in Elements. Only two, Eudora Welty and Helen Keller, get the honor of multi-page prose works. Girls, you should be mommies, and maybe you could write poems.) The real surprise to a secular reader is not that the selections are especially religious. A few are, but most aren't.

The High Weirdness is to be found before and after the literary readings, in the book's interpretive framework, and especially in the "About the Author" notes (we'll address those in a later post -- today, we'll look at How To Read Literature Like a Fundamentalist). Each topic area in Elements is introduced with a brief discussion of how that figure of speech or narrative structure is used in the Bible:

Personification gives human characteristics to objects, ideas, abstractions, or animals. Notice, for example, Isaiah 55:12: the mountains and hills "break forth...into singing, and all the trees of the field...clap their hands" (5).

It is perhaps a relief that the editors do not insist on literalism for this passage, at least. Elements is careful to remind young readers that, for the best examples of literary excellence, "there is no writing in English that equals the Authorized (King James) Version of the Bible" (27). However, the editors warn, "If the artistry of Scripture is detached from the message and authority of Scripture and its divine origin is disregarded, literary analysis can promote unbelief" (ix). Such worries about theological purity run throughout the book. Even aesthetic judgements are possible avenues for sin. In discussing allusion, we move from the perfectly obvious observation that modern readers often miss the allusions in older literature, to a peevish condemnation of the inside jokes of modern writers:

The allusions in much modern poetry are private rather than public. That is, they refer to the author's personal experiences rather than to the common experiences of mankind or even to the general reading experience of educated people. Unidentifiable personal allusions...indicate that the writer does not care to communicate clearly with his reader or that he egotistically thinks himself the center of everybody's world. Sensible readers are impatient with such vagueness (92-93).

This suspicion of anything other than clarity in writing is something of a running theme in Elements. After all, the King James Bible is always straightforward and obvious in its meaning (yes, they suggest this -- biblical allegories are a simple matter of diagramming out what the symbols stand for!), so good writing should be, too. The editors' utter intolerance of ambiguity comes to a head in their introduction to the "Short Fiction" section, which is worth quoting at length:

The Bible describes evil actions but leaves no doubt what our attitude toward those actions should be. It does not leave us in moral confusion. Good fiction likewise does not, directly or by implication, call good evil or evil good. It does not leave moral questions unanswered. Its moral viewpoint is that of the Scriptures.

Fiction then needs to be judged as strictly by standards of truth as nonfiction. There is no subtler persuasion than that which occurs in a well-written serious work of fiction. We will need to ask of a story whether God -- the Biblical God -- is present and active, at least by implication, in its imaginary world.... Do characters' actions have moral consequences? Is evil condemned and good approved? ... The discerning Christian approves of fiction that is neither cynical (denying the possibility of happiness and goodness) nor sentimental (denying the possibility of unhappiness and evil but Biblically realistic , affirming the possibility of happiness and goodness as man acts in accordance with the will of God) (228-229).

We have a feeling that the editors of Elements of Literature For Christian Schools would not much care for a lot of our favorite books and authors. Catch-22, for instance, is a hell of a good read, but isn't especially redeeming, and it certainly doesn't hold out much hope for redemption. For that matter, neither does Bleak House. Vonnegut? Orwell? Cheever? No. Octavia Butler? Tom Robbins? Zadie Smith? Carl Hiaasen? Nope. Louise Erdrich? Philip Roth? Saul Bellow? Ursula Leguin? No, no, no, and no. David Sedaris? Oh, my, no. No, sorry, every one of them is a bad writer by this definition. Maybe Anthony Trollope is OK, although his characters find happiness while being Christians, not really because they are Christians.

We suppose The Handmaid's Tale is right out, too, although at least it has a happy ending.