This 'George W. Bush' Fellow's Ideas Intrigue Us, But We Still Don't Want His Newsletter 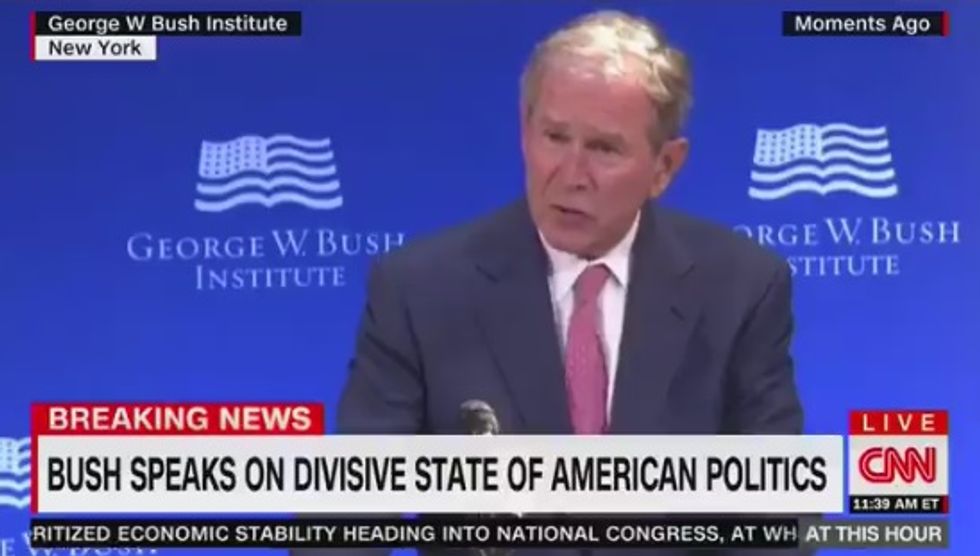 Let's get this straight: George Bush was still a terrible president. But with Donald Trump having in just nine months seized the trophy for "Worst President Ever" (after which he tried to sell it to Russia as a golden samovar), ol' GWB is looking downright tolerable by comparison. Which is why editorials are falling all over themselves to praise W's speech today at the George W. Bush Institute, where he said things in this country are getting damned weird. He never named the current president, but there was plenty that sounded like it just might have something to do with the current occupant of the White House (when he's not off at one of his golf resorts) and his Online Flying Monkey Brigade:

There are some signs that the intensity of support for democracy itself has waned [...]

We have seen our discourse degraded by casual cruelty. At times, it can seem like the forces pulling us apart are stronger than the forces binding us together. Argument turns too easily into animosity. Disagreement escalates into dehumanization. Too often, we judge other groups by their worst examples while judging ourselves by our best intentions -- forgetting the image of God we should see in each other.

We’ve seen nationalism distorted into nativism -- forgotten the dynamism that immigration has always brought to America.

Now, it's certainly possible to spin that as an attack on "extremism on any side," but there aren't a hell of a lot of lefty folks demonizing immigrants or going full-goosestepping nationalist. And Bush surely had Trumpian "populists" like Steve Bannon and Stephen Miller in mind in his subsequent comments, too. He doesn't have to say "America First" -- or remind us it was the slogan of genuine Nazi apologists -- to make the point:

We have seen the return of isolationist sentiments – forgetting that American security is directly threatened by the chaos and despair of distant places, where threats such as terrorism, infectious disease, criminal gangs and drug trafficking tend to emerge.

Mercy, the man even talked about the Russian attack on the 2016 election and said we have to resist the efforts of Russia at "turning Americans against each other." After all, that's one job we don't need to outsource, since Frank Luntz wrote the GOP style book.

We don't have any illusions that George W. Bush is a beacon of decency and purity. It's remarkably easy to recall exactly why he isn't:

But this speech wasn't for us damn liberals anyway. It was for the 40% of Americans (the Republican ones) who don't hate GWB and who are wondering just what the hell happened to their party when the screeching rageweasels took over. You don't have to love Dubya to recognize that as awful as he was, he was, to turn P.J. O'Rourke's assessment of Hillary Clinton around, "wrong about absolutely everything," but at least he was "wrong within normal parameters." We'd far rather be making fun of a George Bush than a Donald Trump, thanks.

And now it is your OPEN THREAD.

Yr Wonkette is supported by reader donations. Please click here to send us money and we'll try not to be so darn divisive.