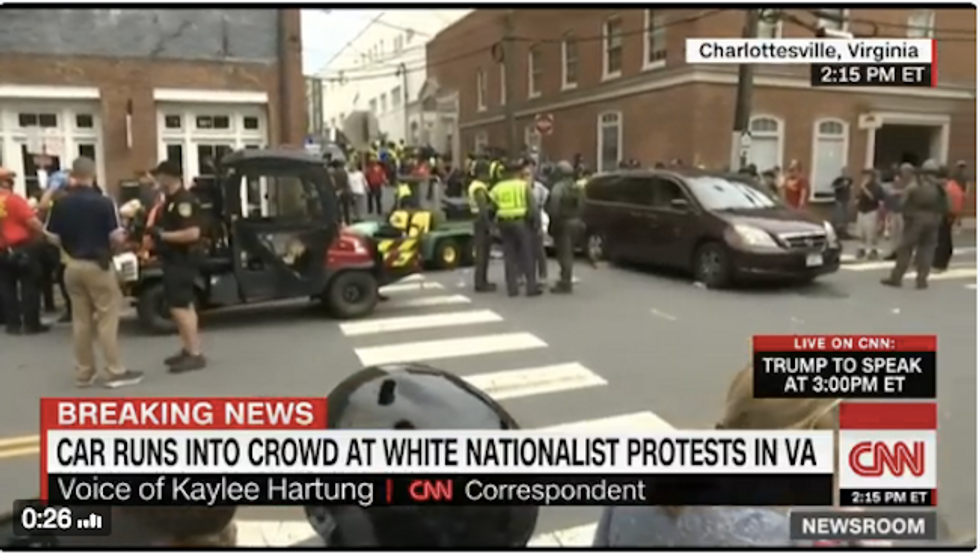 So much stuff is going on with all the douchebag Nazis in Charlottesville that we could not just pick one thing, so we are doing all the things. And I guess I'll probably just keep updating it, because stuff just keeps happening.

Some Crazy Terrorist Asshole Drove A Car Into Counter-Protesters.

Video of car hitting anti-racist protestors. Let there be no confusion: this was deliberate terrorism. My prayers with victims. Stay home. pic.twitter.com/MUOZs71Pf4

Yep! That sure is some terrorism right there! The crash has resulted in several injuries "from life threatening to minor:"

BREAKING (2:30pm): "A life has been lost," says Charlottesville Mayor.

BREAKING: (2:39pm) The driver of the car has been arrested

Trump Responds! In The Most Vague Manner Possible!

It was received in the exact way you would expect, by people like punchable Nazi Richard Spencer.

Given that the Nazis are going around chanting Trump's name, he probably doesn't want to say anything that could be interpreted as directly opposing them! They're his base, after all!

GUESS WHAT WHITE SHARIA IS? Oh, I will tell you. It is this swell idea that white supremacists and loser 4chan dudes came up with, where they basically get to be in charge of all the stuff and get revenge on "sluts" and ban women from voting and working and also all get girlfriends or something. It also involves being very racist and homophobic, because of course it does.

I'm telling you. All of this shit just comes down, in the end, to "Women won't fuck me and I am MAD ABOUT IT."

Here Is A Picture Of Richard Spencer Getting Arrested, Just Cuz.

That hits the spot.

Reid was interviewing Rev. Traci Blackmon, when suddenly violence erupted and she had to be whisked off camera yelling "Gotta go!"

The Nazis Are Using The Detroit Red Wings Logo For Some Reason?

What a world, when our "leaders" cannot say "Hey, Nazis are bad."

Here Is Trump's Official Statment, In Which He Still Fails To Say Nazis Are Bad.

Trump on #Charlottesville: "No matter our color, creed, religion or political party, we are all Americans first." https://t.co/6sdtzt0RKF

Yes. He is very upset about the bad hate that is coming from all sides. All of them. Many, many sides.

OH HEY! Remember that time Trump decided the government should just leave all the nice Nazis alone and stop looking into any of the terrorism they do?

Here is a really cool story about how Sebastian Gorka went on Breitbart News and talked all about how it is so unfair that the left picks on White Supremacists all the time, when they are "not the problem."

So that is it for now (WE HOPE), so long as nothing too crazy happens. Please return to your beds and pull the covers up over your faces while sitting in the upright position, screaming into your hands until we see you tomorrow.

Unless, again, something horrible happens.

In the meantime, feel free to throw us some cash money by clicking on that little link right there.