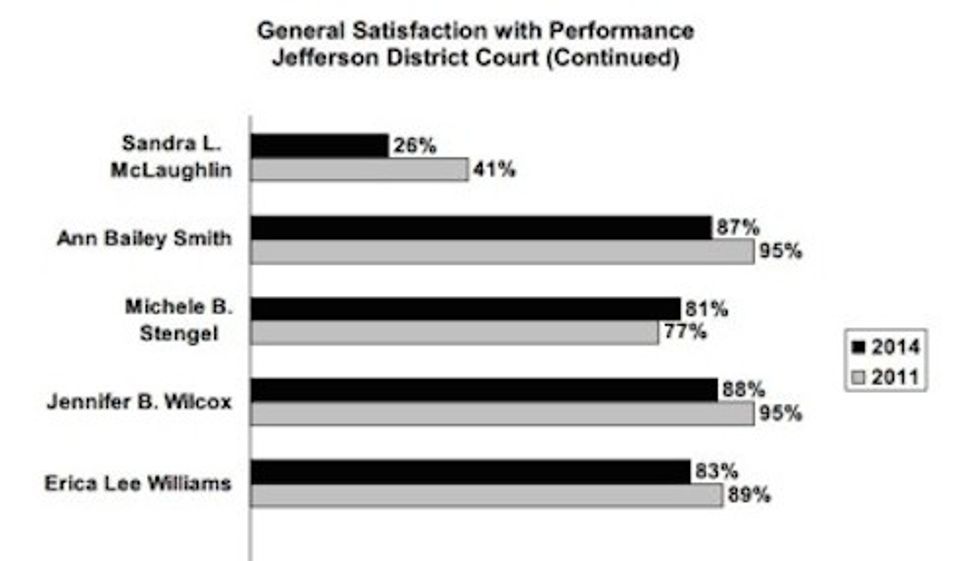 Oh wow. Where do we even start with this judge lady, Sandra McLaughlin of Jefferson County, Kentucky? Seriously, she is possibly the worst judge alive. Yes, yes, there are worse-r dead judges, we are sure, but this lady is definitely in the running for the un-coveted most terrible title. What makes her so special? Is it her breathtaking racism? Is it her habit of mocking defendants? Is it her nasty practice of denying people the services of a public defender? Yes and yes and yes!! Let's judgesplore just how bad one person can be.

Let's start with that video up top, shall we? Clicky-clicky! Yes, now you know that she told an African-American defendant that wearing an Obama t-shirt in her courtroom was not helping his cause and he was lucky to get out of her courtroom alive. Those are super-appropriate things for a judge to say, we think!

Let's move on to the part where she seems to judge people for crimes they didn't actually commit, because that's fun.

McLaughlin accused defendant Wesley Taylor of being “up here selling dope to little children.” That assertion -- made during Taylor’s arraignment on a drug possession charge -- was false; he was not accused of selling drugs to anyone.

Given how otherwise even-handed she seems, we're sure this misunderstanding of Mr. Taylor's crime didn't result in any additional sentencing or other issues whatsoever, nosiree.

She's also not so clear on that whole "right to counsel" thing, because it was probably something made up by evil liberals maybe.

[McLaughlin] denies the appointment of public defenders in most minor shoplifting cases and some other misdemeanor cases because “the resources in the public defender’s office are very scarce.”

But Robert Lawson, a law professor and former dean of the College of Law at the University of Kentucky, said McLaughlin should not allow the alleged scarcity of resources to affect whether or not lawyers are appointed in cases where jail time is a possibility.

YEP THAT WHAT HE SAID.

In case you're wondering, this isn't just some muckracking little bunch of journalists that are taking issue with the talented Ms. McLaughlin. No, pretty much the entirety of her profession thinks she is just literally the worst.

Only one district court judge has been ranked lower than 26 percent since the Bar Association began its evaluations in 1979.

That is impressively bad. You really have to roll up your sleeves and put in some serious time and energy to be that bad. Oh, and we can't forget the fact that she's running for re-election right now but is lying on her campaign materials about how the police endorsed her, when they actually endorsed her opponent. Whoops! Honest mistake! Could happen to anyone, really.

Last, but not least, we reflect upon the fact that Judge McLaughlin used to be a prosecutor, but was fired back in 2004 for "grabbing and berating a juror after an acquittal in a case she had prosecuted, according to media reports." All together now: SHE SEEMS NICE!