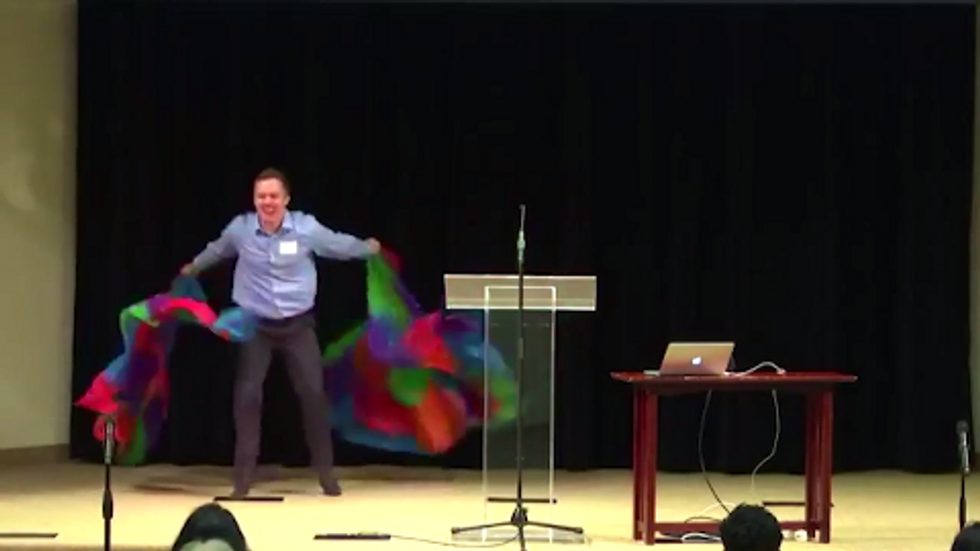 The moment you became straight

Are you so gay right now? Thank God, you have come to the right place to get that fixed!

MassResistance is one of the weirdest anti-gay hate groups out there. What it lacks in influence, it makes up in silliness. The group considered the Obama administration's push to curb anti-gay violence around the world "cultural terrorism." Its leader, Brian Camenker, believes gay-bashing victims only get bashed because they're asking for it by being flagrantly gay, and he also believes gay people are bad at sports because gays don't have the "stability" or "alertness" to be good at sports.

Also, MassResistance just released a 600-PAGE book about how gay sex is dirty and bad and EWWWWWW GROSS, so it's not like they're fixated or anything.

Media Matters reports that MassResistance just had a conference on "Countering the LGBT Agenda," and we think you'll agree that if nothing has convinced you to wash that dick right outta your hair yet (or the lady parts, if you are a lez), this video, which the emcee introduces as a "song thing," will do the trick. It is interpretive dance! There is a rainbow flag! Oh just watch, you silly gay homosexual:

Are you unable to watch the video? That's OK, because we made you a .gif of the most important, life-changing moment. It comes at 1:28, when, the ARTIST!, after some general gay-flitting around with the pretty rainbow flag with Jesus-y music playing about how "love keeps no record of wrong," does this:

THAT IS THE SHIT RIGHT THERE. IT IS "LET IT GO" FOR THE "EX-GAY" CROWD!

No, literally, the first words of the chorus are "Let it go." We cannot make this shit up.

To be fair, we can see how that would ward the gay demons away.

You could watch the full video, but that moment at 1:28 is definitely the premature climax. The rest of it is kind of ...

The song is by a Christian singer named Matthew West, who seems to do some very catchy Jesus music, the kind that sounds like a soundtrack for a night of sexxxy romance with the Messiah. We do not know whether or not West signed off on having his music used for this, which we can only describe as "color-guarding away the gay." It works, though. Obviously.

Now go forth and enjoy your newfound heterosexuality. Just be glad you didn't have to spend all your money on a conversation therapy camp where they de-gay you by forcing you to fondle horses. That is definitely a scam, unlike this, which is legit.