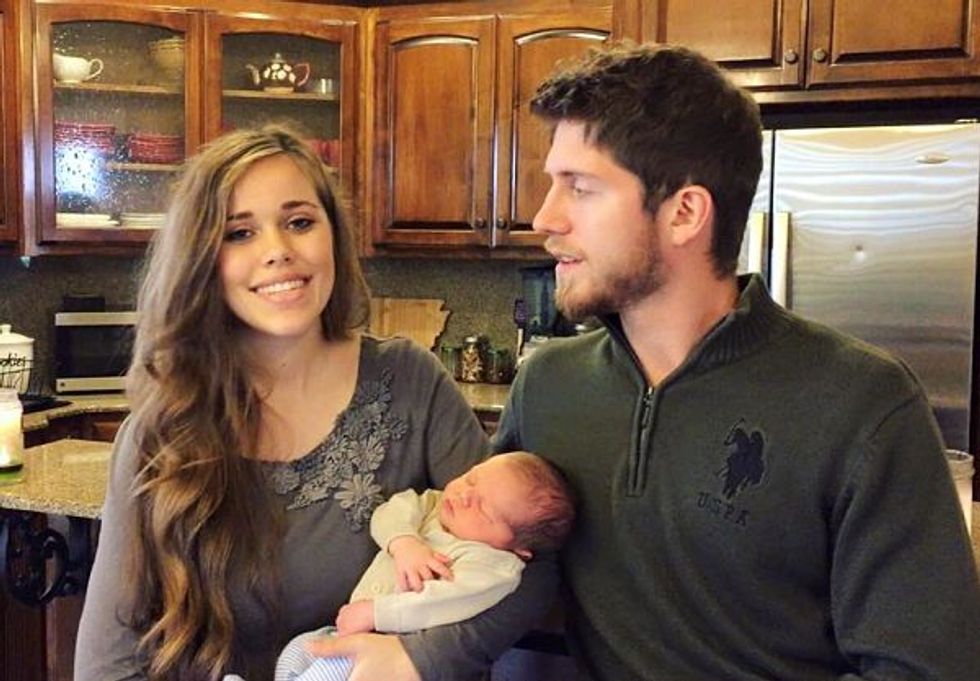 Goddammit. As of this week, this particular person working at yr Wonkette can no longer watch xfinity shows online thanks to an "upgrade." What does this mean? This means that this particular person working at yr Wonkette had to ACTUALLY BUY THIS DUGGAR HORRORSHOW from Amazon this week. You people owe me three bucks for that. And one million dollars for pain and suffering.

Last week, we got to see how disgusting Ben Seewald is when he eats, because that is a thing America is yearning and burning to know. This week, Ben is going to be left home with the baby, which we thought was something that happened last week but good Christ we cannot keep track of the squashy baby comings and goings on this show.

OK yeah, apparently this is the first time Ben has ever been left alone with his own child, which he calls babysitting. In a rare moment of proto-feminism, Jessa informs him that it is technically not babysitting when it is your own child. You go, girl.

Ben flails around, asking Jessa what to do if squashy baby Spurgeon gets hungry or fussy? Should he text Jessa? She says yes, he should, because she will be close by and she will rush home if the baby is unhappy. This means that none of that tiny bit of independence she showed in the paragraph above is going to stick.

Ben is basically planning on calling Jessa if the baby gets fussy or he decides he will look on the internet for tips. People, this baby is slightly less squashy and appears to be a few months old. What has Ben been doing all this time? Surely squashy has been fussy before.

Ben holds the baby without supporting its neck, which does not bode well.

Old Maid Jinger is going with the puffy Duggar boys (but not Josh, who is perhaps still locked up in Christian Side Hug Sex Rehab when this episode was filmed?) to look at cars because the boys like to buy and sell cars or something and maybe Jinger will do that too. Jinger's gonna need a career if she can't hook a man soon because she is a whopping 22 years old. Are Duggar girls even allowed to work outside the home? Maybe she gets a pass if she works with her brothers? Or maybe she's just buying a car of her own? We cannot tell. We do not care. One of the puffy brothers, John David, explains that maybe one day some day Jinger could be car savvy.

God, we hate the brothers.

Without any explanation, we have an interlude where all the siblings explaining who Jinger is. She has many facial expressions! She likes to work at the juvie detention center! She likes cities! Is this some sort of Christian way of making a dating video, where your family members just talk about how great you are and then a good Christian Quiverfull Wannabe Dude scoops you up?

John David actually explains to the camera how auctions work: you bid on things, and if you are the last one with the highest bid, you win. Thanks, John David, for telling us something literally no one in America did not know.

John David, who is a pompous git, lets Jinger raise her hand to bid, but only when he tells her to. She wins the car! Congrats Jinger! You did A Thing!

Jessa wants a mocha smoothie, but isn't sure she wants coffee in it. We are not sure what would go in a mocha anything if it doesn't include coffee?

Of course the coffee shop is some sort of Jesus place where the Jesus lady who runs it sends Jesus money to orphans or something. Man, the places these people can go must be so limited if it always has to be a Jesus friend of those.

Jill and Derick have been to the orphanage that coffee lady runs, which means we get a brief interlude of Derick speaking his abysmal Spanish.

Meanwhile, back at home, Ben is asking the baby what the baby wants to do. Ben, it's a fucking infant. It wants to sleep or eat or shit or cry. It probably doesn't want to run to the corner store for cigarettes or discuss Russian literature or have a prayer circle.

Ben tires of holding the baby, so he decides to shove a pacifier at it and lay it down on the couch in a way that looks vaguely threatening.

Back at the coffee shop, the ladies are discussing Anna's baby, which they've slapped a ribbon on so you are damn sure it is a girl baby, thankyouverymuch.

We also have to discuss the fact that squashy baby Spurgeon can smile and laugh and babble, which is apparently a thing no other baby on earth can do. Praise Jesus.

Jessa gets back to the house and Ben has not murdered the baby or accidentally set it on fire, so he gets effusive praise for caring for his own goddam child. These people are the worst.

Let's go to the still-unnamed-country in Central America that Derick and Jill are in, shall we? Did you remember that they also have a squashy baby? They do! It is named Israel. Did we mention these people are the worst?

They praise their squashy baby for not knowing what air conditioning is, but he seems to want to eat the fan. Israel might not be the brightest spawn of a Duggar, perhaps?

Now we're feeding Israel pickles. MUST SEE TEEVEE. This show is just going to keep talking about the babies because the babies are too young to have molested any siblings or signed up for Ashley Madison yet.

John David and Jana and ... Joe? sure, let's go with Joe ... are going to build a playhouse or a treehouse or something in order to get the younger Duggars to go outside. John David explains, with increasingly unwarranted and creepy-sounding enthusiasm, how he's going to build something really big instead, like "requiring multiple trucks of lumber" big.

That is ... not a playhouse. Is that a bridge? Is the bridge built over a skatepark or something? What the hell is going on?

Jinger's new car is ... disgusting. Like, literally full of garbage. Like old food garbage. Remind us never to go to a car auction. Do you think this was a Christian car auction? Probably easy for us to avoid if it was. Somehow cleaning the goopy gross car leads to the producers asking Jinger yet again if she has a special man in her life. What do these things have to do with one another?

Jinger addresses one of the million elephants in the room, which is the perception that the Duggar girls don't do much except learn to cook and clean and wait for their man. She explains that they also learn life skills like buying cars. It's so forced that you wonder if there is a gun pointing at her offscreen.

Jana is now realizing what an epic mess she has created by encouraging the boys to build something in the backyard. This is what happens when people don't have to work outside the home.

Apparently they're going to build a treehouse? But it doesn't seem to be built in a tree. It's going to be built on stilts and have a walkway. That actually sounds super cool, but is not a treehouse, we think? While we watch the building of the not-quite-a-treehouse, the producers take a run at John David about who the next Duggar to enter a courtship will be. God, the producers must be so desperate. What are they going to do if they can't have another Duggar spinoff??

Jim Bob told Jinger how much to sell her newly acquired car for, but some of the brothers have to accompany her to sell it because Jinger is so nice that she might give the car away. One of the brothers does all the negotiating while Jinger stands around biting her lip. This show is really doing a bang-up job showing the independence of the Duggar ladies, isn't it?

Next time: building the treehouse! Baby shower, because fucking babies! More bothering the Duggar children about who will get their courtship on next! The further disintegration of my mental health! Stay tuned!